As we face a rising cost of living, war in Ukraine and now the spread of a new disease, a new Ipsos poll reveals 4 in 10 (38%) Britons are finding it harder to stay positive day-to-day than at the start of the year. Women more likely to be finding it difficult, with 2 in 5 (42%) saying they are finding it harder, compared to around 1 in 3 men (35%). Only a fifth overall (19%) say it is easier to stay positive than at the start of the year. 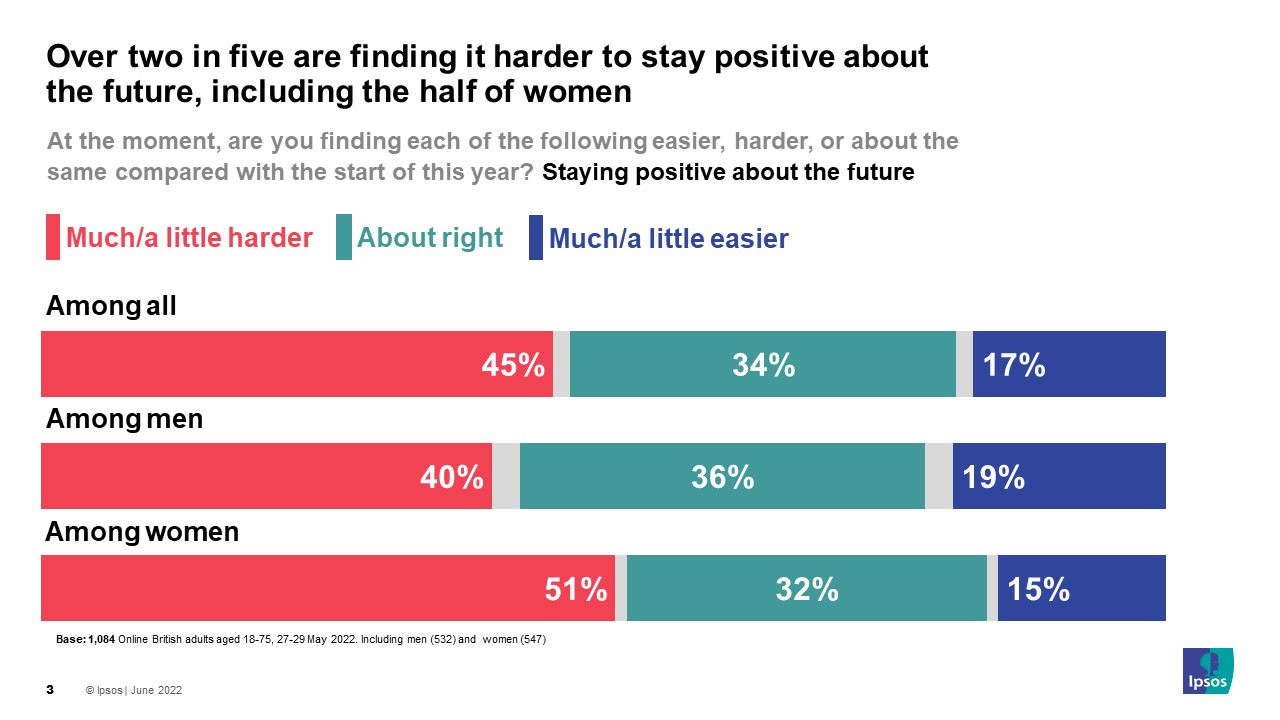 Looking to the future, with news about the spread of monkeypox, Britons are more concerned about the likelihood of a new global pandemic caused by a new virus than they were towards the end of 2020. While a third of people (33%) were concerned about this 18 months ago (33%), this has now risen to 2 in 5 (43%). 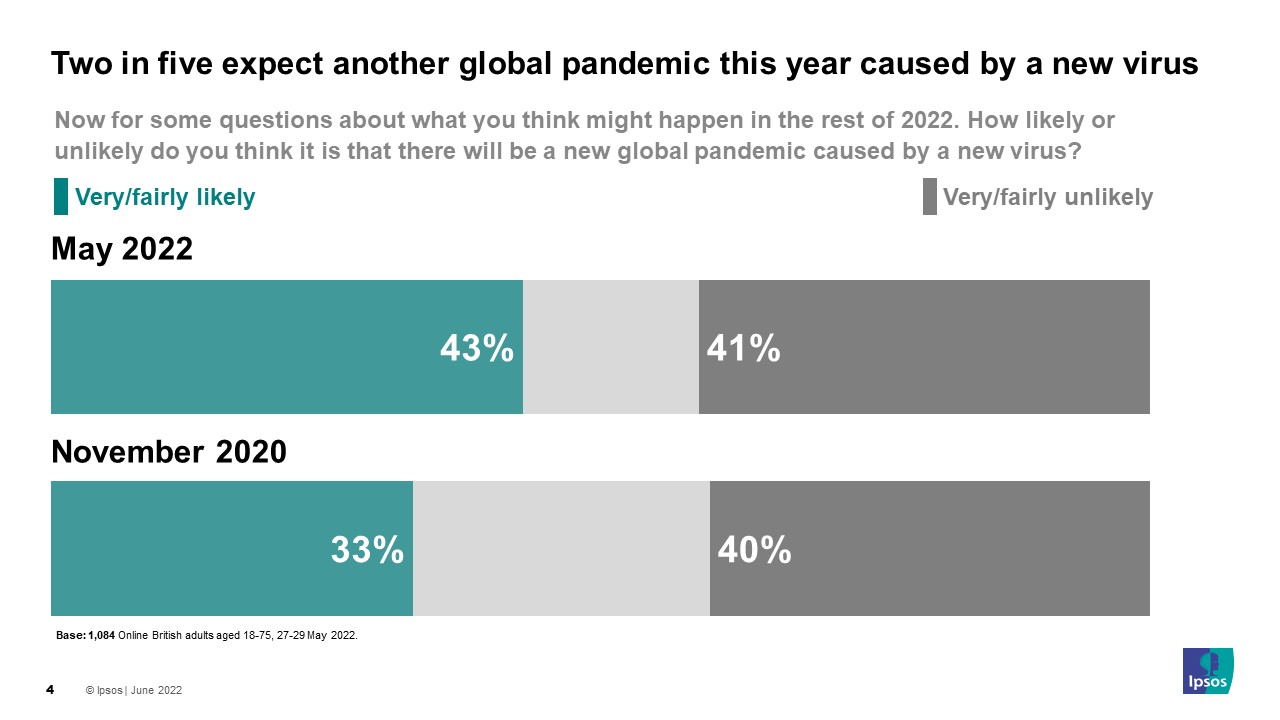 While concern about Coronavirus falls, worries about the economy rise

Looking to the rest of the year, Britons are much less concerned about Coronavirus than previous years. There has been a large fall in the number of individuals concerned about future lockdowns, with only 2 in 5 (42%) now concerned compared to three-quarters (73%) in May 2021. Similarly, while 4 in 5 (79%) were concerned about the spread of a new variant of Coronavirus which is resistant to vaccines in May 2021, this has now dropped to just over half (55%).

Looking to another illness, half of Britons are concerned about the spread of the monkeypox virus (48%), however a similar proportion are not (45%). Most are keeping an eye on the situation with 57% closely following news stories about the illness. 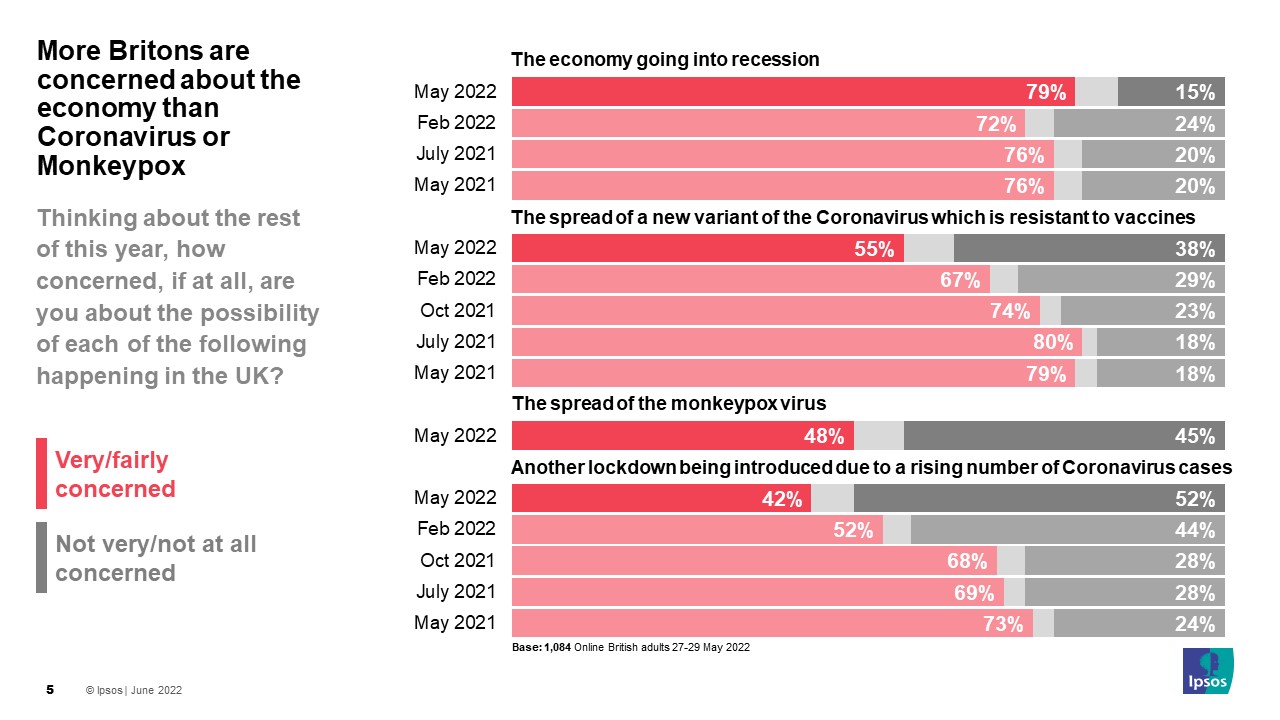 Given the cost-of-living crisis, the war in Ukraine and a new virus in the news, it comes as no surprise that many Britons are finding it harder to stay positive, both day-to-day and for the future. The cost of living continues to be a real concern for the public – with almost 8 in 10 concerned about the prospect of the economy going into recession this year.