The Issues Index recorded a similar rise in worry about the NHS in May 2017, the last poll before the General Election in June that year: concern rose from 48 per cent to 61 per cent between the April and May waves of the Index.

The level of concern about the NHS has increased across the board, including rises among Conservatives (up 15 points from October), Labour supporters (up 22ppt), men (+14ppt) and women (+23ppt) as well as those in social grades ABC1 (+17ppt) and C2DE (+21ppt). There have also been increases among younger Britons (+24ppt among 18-34 year olds) as well as those aged 55+ (+24ppt), although those in the middle bracket have seen less of a shift.

This month is also only the second time since April 1997 that two issues have scored over 50 per cent on the Issues Index at the same time – the previous occurrence was in February 2018.

Despite this surge in worry about the health service, Brexit remains by far and away the biggest single issue facing the country: 44 per cent identify Britain leaving the EU as their biggest concern. However, the proportion saying the same about the NHS has doubled since October, from seven to 16 per cent. 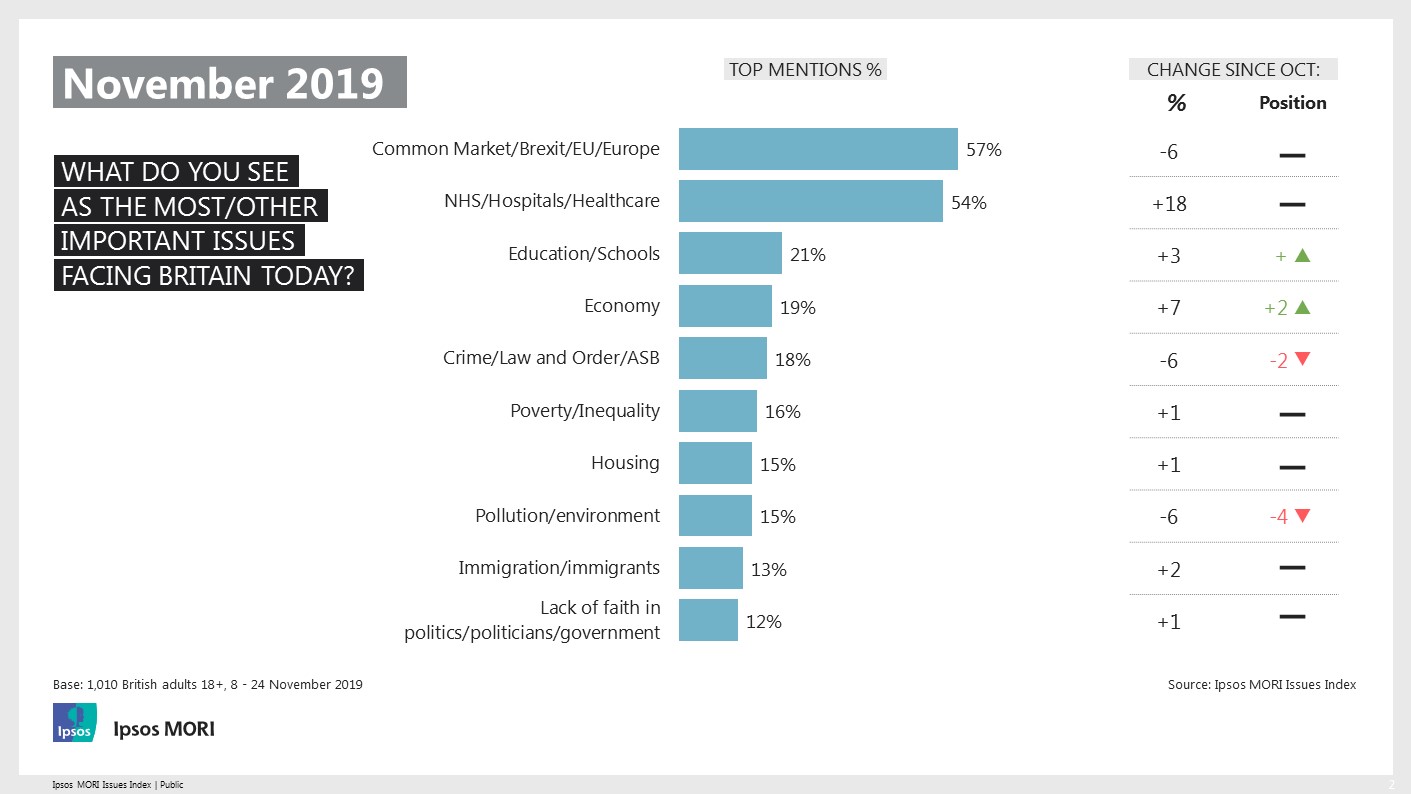 The NHS is seen as the most important issue facing Britons’ families, while Brexit is the pre-eminent issue influencing how people might vote.

New questions were added to the Index this month to understand the public’s views on the importance of different issues to their families and to their vote: 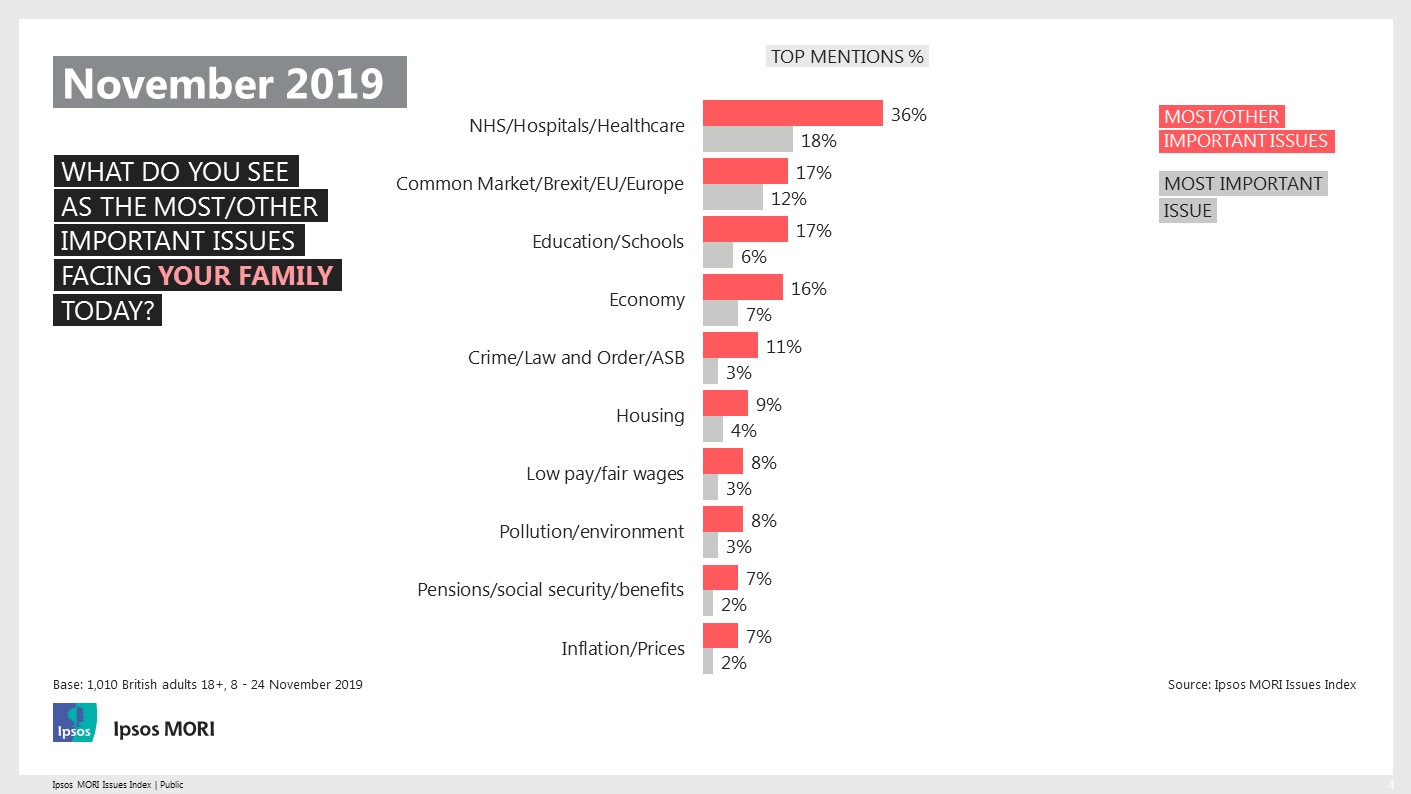 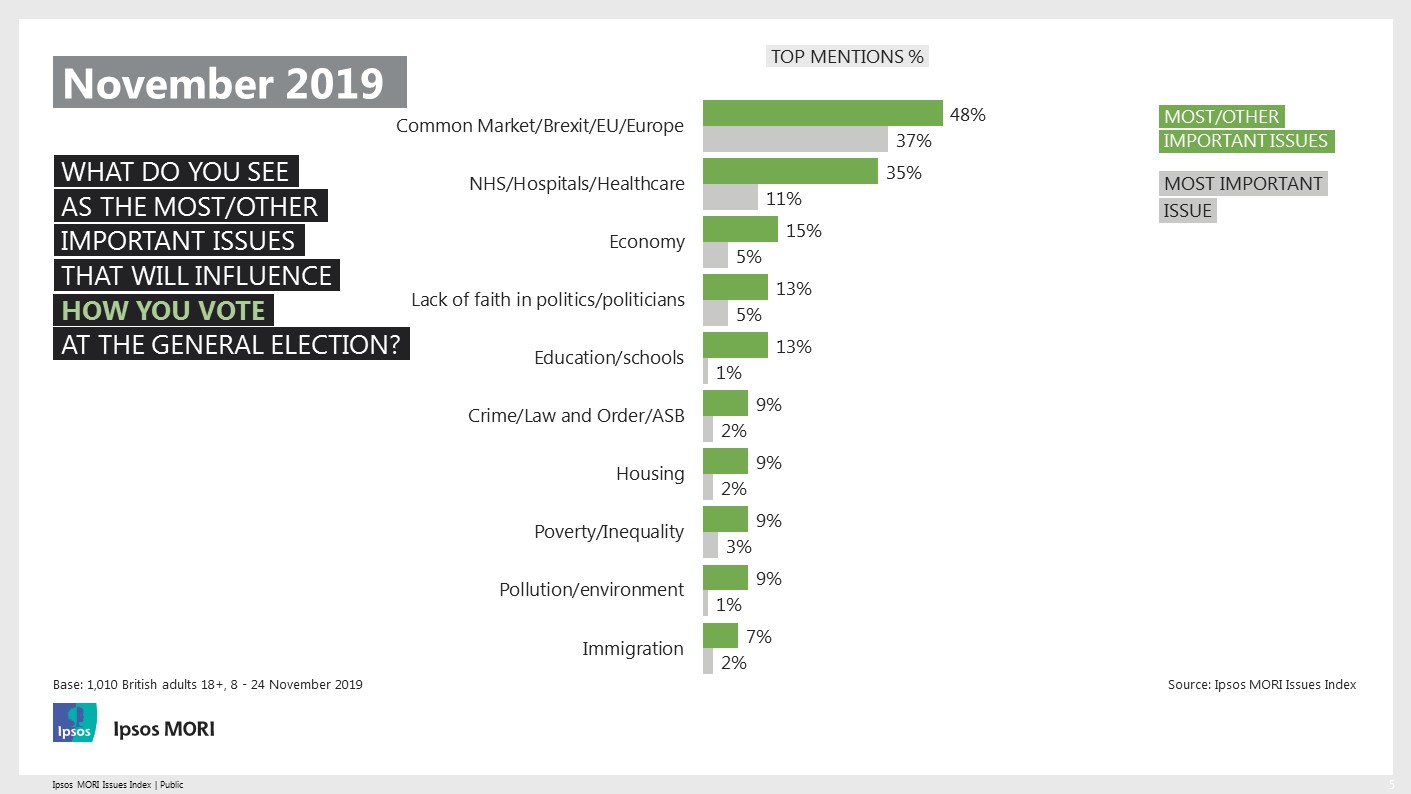 This month’s Issues Index appears to show a refocus in public concerns, coinciding with the campaign for next month’s election. While Brexit remains the biggest national concern, its importance has dipped somewhat and there has been a sharp growth in the proportion who see the NHS as a major issue for the country. Election time has also seen increases in the proportions concerned about the economy and education, while worry about crime and the environment has dipped.

New questions on the index show that public priorities differ dependent on how issues are framed: while Brexit is the biggest concern nationally the NHS is considered the most significant issue for Britons’ families. However, when we ask which issue is the most important influence on how people might vote, half say Brexit and one third say it is the NHS

Technical note
Ipsos's Issues Index is conducted monthly and provides an overview of the key issues concerning the country. Ipsos interviewed a representative quota sample of 1,01o adults aged 18+ across Great Britain. The answers are spontaneous responses, and participants are not prompted with any answers.
Ipsos's Capibus vehicle was used for this survey. Interviews were conducted face-to-face in-home between 8 and 24 November 2019 at 188 sampling points across Great Britain. Data are weighted to match the profile of the population.