As the prospect of winter starts to set in, along with increased energy and food prices, very many Britons are worried about rising cost of living. Nine in 10 (91%) are concerned for the country as a whole, while 82% are worried about the effect it will have on them personally and 79% worry for the people in the area they live in (although these are slightly down from their peak in August, this is only back to the levels of concern in May, and overall worries remain high). 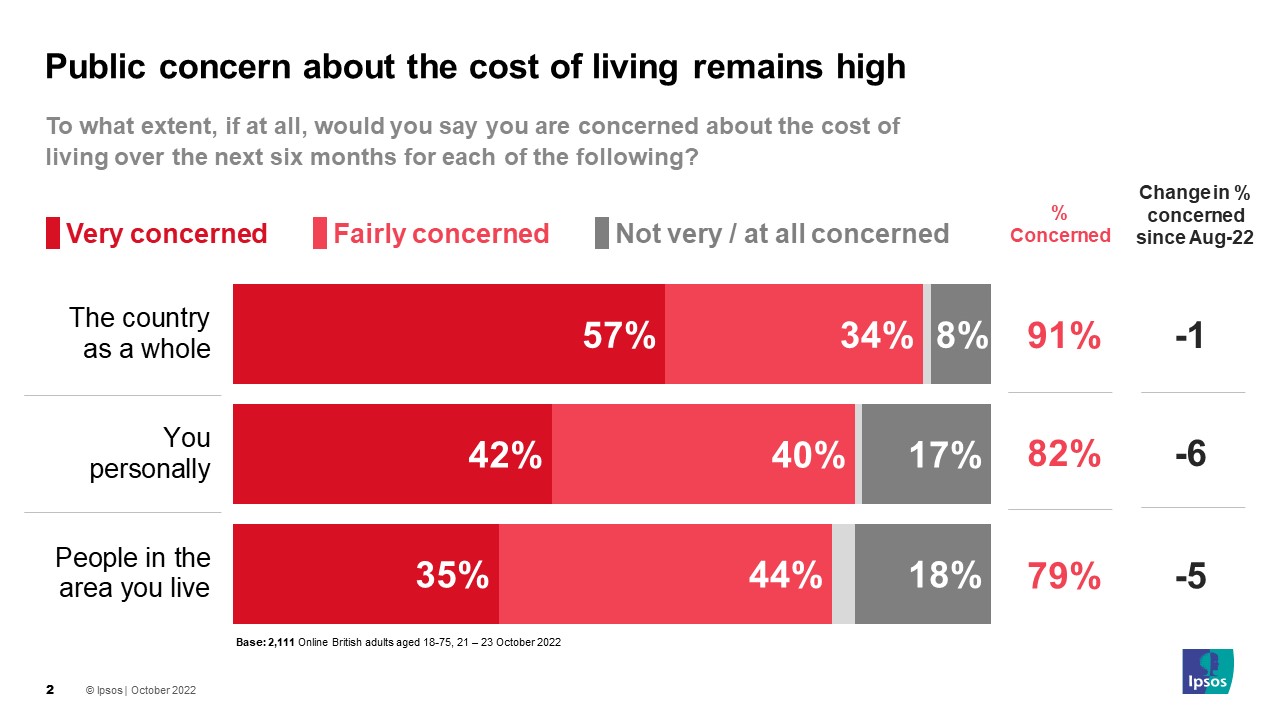 How are people responding to rising cost of living?

In response to rises in the cost of living, 6 in 10 Britons (60%) say they have stopped themselves from turning their heating on when they usually would have since the start of the year, while half have gone out socialising less than they usually would (48%) and 4 in 10 have switched their regular supermarket to a cheaper one (41%).

Just under 4 in 10 have driven their car less (39%) while a similar proportion of workers have worked more hours in response to rising cost of living (36%). Around a third have used price comparison websites to look for a cheaper energy supplier (34%).

Around 1 in 4 Britons say they have sold belongings, used a credit card for essentials (26%), cancelled TV subscriptions (25%) or even skipped meals (24%).

Looking forwards to the next 6 months, around 1 in 4 Britons expect to sell some of their personal belongings (26%) as a result of rises in the cost of living.  Among workers, another 1 in 4 (27%) expect to work more hours at their current job, while 17% think they might even need to take on a second job as a result of cost of living. Just under 1 in 10 expect to miss payments on energy bills or other household bills (both 9%), while a similar proportion of those with children think they will need to reduce their spending on childcare (11%). Fewer think they will take out a loan/increase personal debt (8%), move to cheaper housing (6%), fall behind on housing payments (6%), sell a car (5%) or take a lodger/tenant (4%).

Can people pay their bills and how are they trying to reduce them?

Opinion is split when it comes to paying energy bills over the last 3 months. While only 27% say it has been easy, 37% say it has been neither easy nor difficult and 35% have found it difficult. This has changed slightly since August when a third (33%) said it was easy, 34% said neither and 32% said difficult.  Young people, those with children and low incomes have found it hardest, with over 4 in 10 in each case saying paying energy bills has been difficult recently. 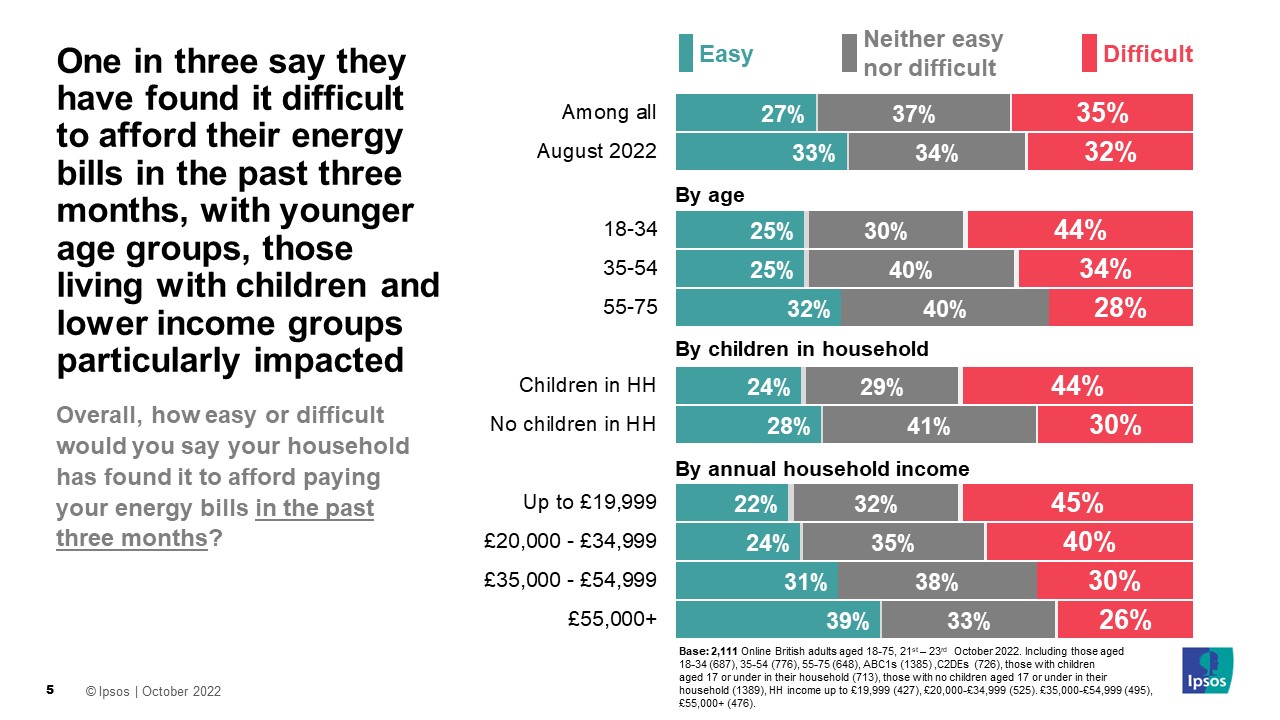 Looking back over the last 3 months, almost 9 in 10 Britons say they have been turning lights off when leaving a room at least once a week (88%). Seven in 10 (72%) have been turning electrical goods off standby when not using at least once a week while two-thirds (66%) are not turning their heating on when they usual would, and 6 in 10 (61%) trying to use less hot water at home.

Three in 10 (30%) say they have installed a smart meter into their home as a result of rising cost of living while 29% have used price comparison sites to look for a cheaper energy supplier. One in 5 (20%) have used savings to pay an energy bill while around 1 in 7 workers have asked for a pay rise (16%) or set up a payment plan with their energy supplier (14%, amongst all Britons). Just over 1 in 10 (12%) have already missed payments on other household bills while the same proportion have asked their energy supplier to accept a reduced bill payment.

Who is trusted to reduce cost of living?

Of those listed in the survey, Keir Starmer is most likely to be trusted by the British public to reduce cost of living (42%, little changed from 39% in August), however almost half say they would not trust him (48%,). Rishi Sunak, the new Prime Minister (though note fieldwork was carried out the weekend before he was appointed) is trusted by 34% (56% do not) while 32% would trust Boris Johnson and only 24% trust Jeremy Hunt (while only 22% would have trusted Penny Mordaunt).

Looking at how different people and organisations will influence the cost of living over the next 6 months, the British public are most likely to expect Martin Lewis, the financial journalist and broadcaster, to have a positive influence (54%). Opinion is split regarding others. Three in 10 (30%) think the Bank of England will have a positive impact while 26% think it will have little impact and 28% say a negative one. Similarly, 29% say Keir Starmer will have a good influence, 30% expect him to make little impact and 25% expect his efforts to have a negative effect.

Around a quarter (27%) expect the incoming Prime Minister (this survey was conducted between Liz Truss’s resignation and Rishi Sunak’s appointment as PM) to have a positive influence on cost of living while 26% expect them to make little difference and 23% believe their impact will be negative. People feel similarly about the Chancellor of the Exchequer, 24% positive, 26% to make little difference and 32% negative.

Where does blame lie for rising mortgage rates?

Britons see a range of actors as contributing to the recent rise in mortgage rates.  They are most likely to mention  the Conservative party’s economic policies in government (74%),  decisions made by former PM, Liz Truss (73%) and the state of the global economy (73%). Just under 7 in 10 (68%) say decisions by the Bank of England have contributed and a similar proportion say the same for decisions made by mortgage lenders. Six in 10 (59%) place blame on the Russian invasion of Ukraine while around half say the Covid-19 pandemic (53%) and Brexit (50%) are important factors.

Looking more specifically at Liz Truss’s government, three-quarters (76%) say it did a bad job at managing rising cost of living. Even among 2019 Conservative voters, 8 in 10 (79%) say they handled it badly.

Where should cuts be made – if anywhere?

Britons are most likely to believe overseas aid has the room to reduce spending (without significant negative impact) in comparison to other areas of public spending. More than 4 in 10 (43%) say this has room to be cut, compared to only 15% who think there is space to cut defence and armed forces spending or benefit payments.

Fire services (3%), social care for older people (4%) and social care for children and vulnerable adults (5%) are seen as least likely to have room for budget cuts, with similar proportions saying the same for the police (6%), state pensions (6%) and education (6%).

Public concern about the cost of living remains very high, and many Britons are taking action across a number of areas – in their use of heating, shopping, socialising and the way they work.  The issue is particularly urgent for more vulnerable groups, such as those on low incomes, who have found it harder to pay their bills or had to take more drastic steps such as skip meals, but we can see concern and people feeling the impact across all sections of society.  While there are some signs that worry is not quite at the peak it reached in August, at an overall level it remains high, and we see in other research that pessimism about the economy shows little sign of improving, as concerns about the cost of living crisis begin to translate into worries for the performance of the economy.
Politically speaking, while Britons do recognise that there are a number of external factors contributing to the rise in mortgage rates, including the overall state of the global economy, the danger for the Conservatives is that their economic policies are also held responsible.  Although this partly reflects the strong public criticism placed at the door of Liz Truss’ government, and Rishi Sunak will hope that he can rebuild confidence now that he is Prime Minister, the challenge remains clear – especially as few Britons think the main public services should be priorities for cuts.