Despite Labour lead, Miliband reaches negative ratings among own supporters 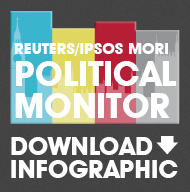 The latest Reuters/Ipsos Political Monitor shows that as Labour regain a lead in the polls, the public’s satisfaction with the Government, David Cameron and Nick Clegg have all fallen sharply in the last month, back to the levels of November 2011 and before the European ‘veto’.

After a difficult few weeks for the Coalition, the Conservatives have fallen six points behind Labour among all those certain to vote, with 35% saying they would vote for the Conservatives, 41% for Labour and 12% for the Liberal Democrats.  The previous two months showed the Conservatives and Labour neck-and-neck following David Cameron’s December veto in Europe, however, this bump seems to have disappeared as both parties return to the same level of support seen in November.

As support for the Conservatives has fallen, so has satisfaction with the Government, Prime Minister and Deputy Prime Minister, all returning to pre-veto levels:

Although Labour has regained its lead, Ed Miliband’s ratings remain largely unchanged from his worst ever ratings last month. Three in ten (30%) are satisfied with his performance as Leader of the Labour Party and 55% are dissatisfied. However, for the first time in his leadership more Labour supporters are dissatisfied than are satisfied with their leader (48% dissatisfied, 44% satisfied). This is the continuation of a trend we have seen developing ever since his election, of growing numbers of Labour supporters becoming dissatisfied with their leader. David Cameron also experienced negative ratings among Conservatives as Leader of the Opposition, although just for one month before he turned it around. Iain Duncan Smith and William Hague however, went through prolonged periods with negative satisfaction ratings among their own supporters.

Economic optimism is now at its highest level since May 2011. A quarter (24%) think the state of the economy will improve in the next 12 months, although still 46% think it will get worse, and 28% think it will stay the same. This gives an Economic Optimism Index of -22 (“improve” minus “get worse”).

“It has been a difficult week for the government with the continuing debate over their reforms to the NHS and welfare system, reflected in their drop in support and the government’s lowest satisfaction ratings since July when the phone hacking scandal first broke. But during this economic gloom the public don’t seem particularly enthusiastic about any of the parties - although Labour have regained their lead, Ed Miliband’s ratings are yet to pick up.”

Ipsos interviewed a representative sample of 1,002 adults aged 18+ across Great Britain. Interviews were conducted by telephone 25-27 February 2012.  Data are weighted to match the profile of the population.