The latest Ipsos Political Monitor, taken July 21st to 27th, shows Rishi Sunak and Keir Starmer tied amongst the public in terms of who would make the most capable Prime Minister. Meanwhile, Liz Truss trails the Labour leader by 6 points on the same measure – although both do better than Boris Johnson. Rishi Sunak also has a slight advantage amongst the public at large and among Conservative voters in terms of being seen as ‘having what it takes to be a good Prime Minister’, but both have improved since April, with the Foreign Secretary reducing the gap among Conservative supporters.

Sunak and Truss versus Starmer

When asked who would make the most capable Prime Minister: 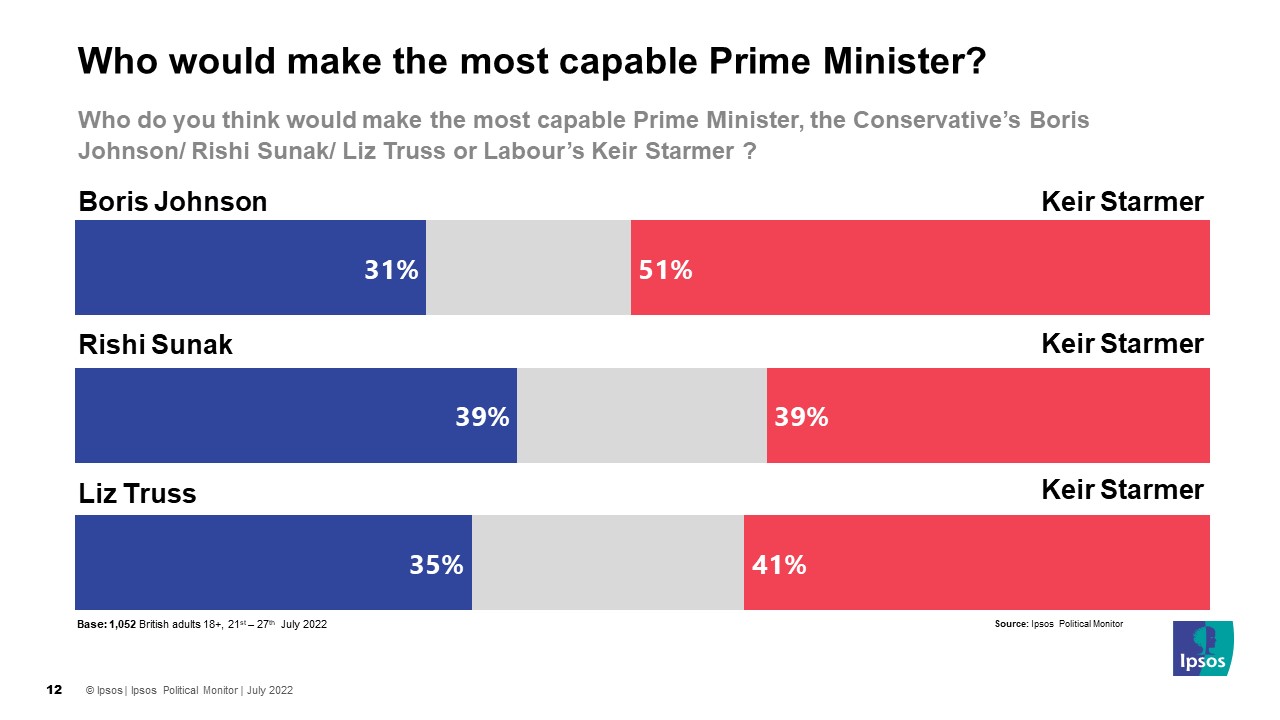 Who has what it takes to be a good PM?

When we ask who has what it takes to be a good Prime Minister, we see little difference in Rishi Sunak and Keir Starmer’s numbers, with Liz Truss trailing slightly. However, the Foreign Secretary is less well known and has already made significant progress since the start of the year, although the former Chancellor has also recovered from his dip in April. For example:

When we consider the views of party supporters, we see that Labour supporters are more convinced by Keir Starmer’s abilities than Conservatives are of either Rishi Sunak or Liz Truss:

Is it clear what Starmer, Sunak and Truss stand for?

With Labour double digits ahead in terms of voter preference and neither Liz Truss nor Rishi Sunak preferred to Keir Starmer as Prime Minister, these numbers show the scale of the challenge the new Prime Minister faces to reverse the Conservatives’ political fortunes. However, with many 2019 Conservative voters undecided and Starmer not opening up a lead over Sunak or Truss either, whoever the new Prime Minister is they will be optimistic they at least have a chance of turning things around.

Ipsos interviewed a representative sample of 1,052 adults aged 18+ across Great Britain. Interviews were conducted by telephone: 21st to 27th July 2022. Data are weighted to match the profile of the population. All polls are subject to a wide range of potential sources of error. On the basis of the historical record of the polls at recent general elections, there is a 9 in 10 chance that the true value of a party’s support lies within 4 points of the estimates provided by this poll, and a 2 in 3 chance that they lie within 2 points. This is especially important to keep in mind when calculating party lead figures.