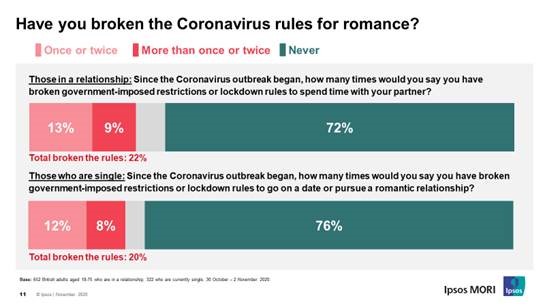 However, these numbers vary by age group. 45% of those aged 18-34 in a relationship have broken the rules to spend time with their partner and 29% of singles in the same age group have broken the rules to go on a date or pursue a romantic relationship. These figures are much lower among older age groups. 15% for both groups among 35-54s and 12% / 6% respectively among those aged 55-75. 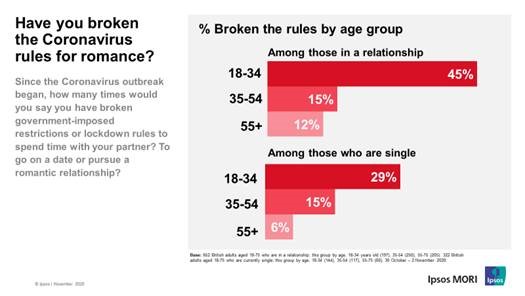 Meanwhile, 1 in 5 (19%) Britons in relationships are experiencing more arguments with their partner since the Coronavirus outbreak, with women (25%) twice as likely as men (12%) to say they have been arguing more. Couples with children in the home (24%) are more likely than those without (16%) to be arguing more and those aged 18-34 are more likely to be arguing more (28%) than those in other age groups. However, overall, 52% of those in a relationship have seen no change in how often they argue with their partner, 9% say they are having less arguments and 19% say they did not argue before the outbreak anyway. 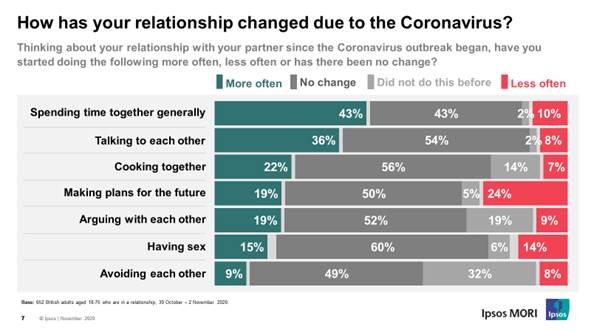 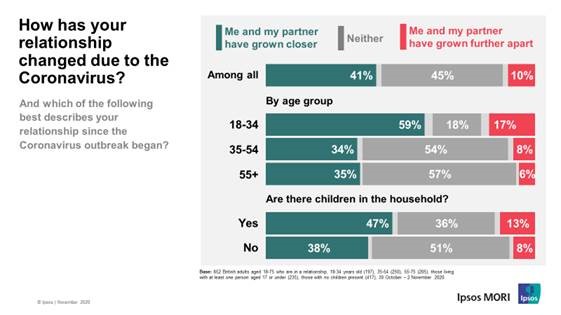 Elsewhere in the poll, whilst half of Britons aged 18-75 have seen little difference (49%), 4 in 10 are feeling more lonely since the Coronavirus outbreak began (40%). 10% feel less lonely.

Women (44%) are more likely than men (34%) to say they feel more lonely. This matches a trend elsewhere in the survey where 58% of Britons say they are finding it harder to stay positive about the future than before Coronavirus, with women (66%) more likely than men (50%) to say this is the case – a trend that we have consistently seen since March.

As we start the second week of national lockdown, the rules and restrictions are certainly having an impact on the nation’s love lives. Our latest Ipsos polling shows that it’s the youngest, those aged 18-34, who are the ones most likely to break the rules to go on a date or pursue a romantic relationship. Having children also clearly has an impact, with one in four couples with children saying they’re arguing more since the outbreak began. We also continue to see the gendered impact of COVID, with almost half of women saying they are feeling more lonely since the COVID outbreak began compared to just over a third of men.