A new ABC News/Ipsos poll finds that even as American concern about the coronavirus wanes, most believe public health restrictions, like mask mandates or limits on public gatherings, are being loosened too quickly. However, opinions on re-opening schools and businesses are more mixed, reflecting the public’s desire to return to a semblance of normalcy. As the country navigates the hoped-for end of the pandemic, two-thirds of the American public continue to approve of the way Joe Biden is handling the coronavirus response.

1. Two-thirds (68%) of Americans approve of Biden’s handling of the pandemic.

2. Concern about being infected with the coronavirus is down from last fall. However, most Americans believe public health restrictions are being lifted too quickly, reflecting continued support for measures to limit the pandemic. 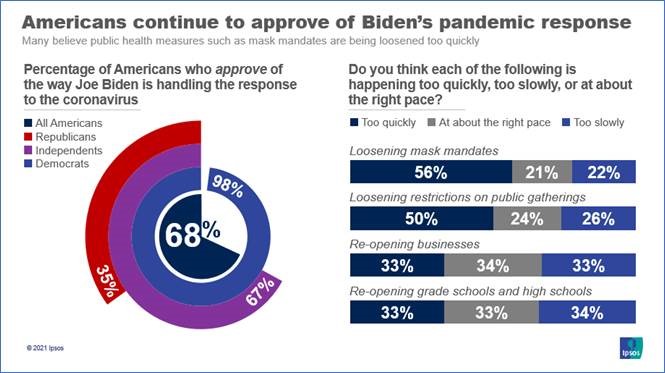 3. Over a quarter of American adults (28%) report receiving at least one dose of the vaccine. Another 15% have tried to schedule an appointment but have not been able to receive a shot yet.

This ABC News/Ipsos poll was conducted March 5 to March 6, 2021 by Ipsos using the probability-based KnowledgePanel®. This poll is based on a nationally representative probability sample of 521 general population adults age 18 or older.