You don’t need to be a pundit or a political insider to know that the economy is a big driver of electoral success, especially in a presidential cycle.

While all signs were pointed up, the global economy is beginning to feel the effects of the coronavirus. The stock market wiped out $6 trillion of wealth in a matter of days, the Fed announced emergency interest rate cuts and some economists are warning of a recession in the U.S, or at the very least a reduction in GDP.

Whatever the future holds, the economy is on the ballot this primary season with promises from Democratic candidates to raise taxes on the rich and level the economic playing field.

Even when things in the economy looked unstoppable and all signs were pointing up, a more complicated reality existed underneath those rosy topline number. That reality, kept at bay by growth, may have just become more important. 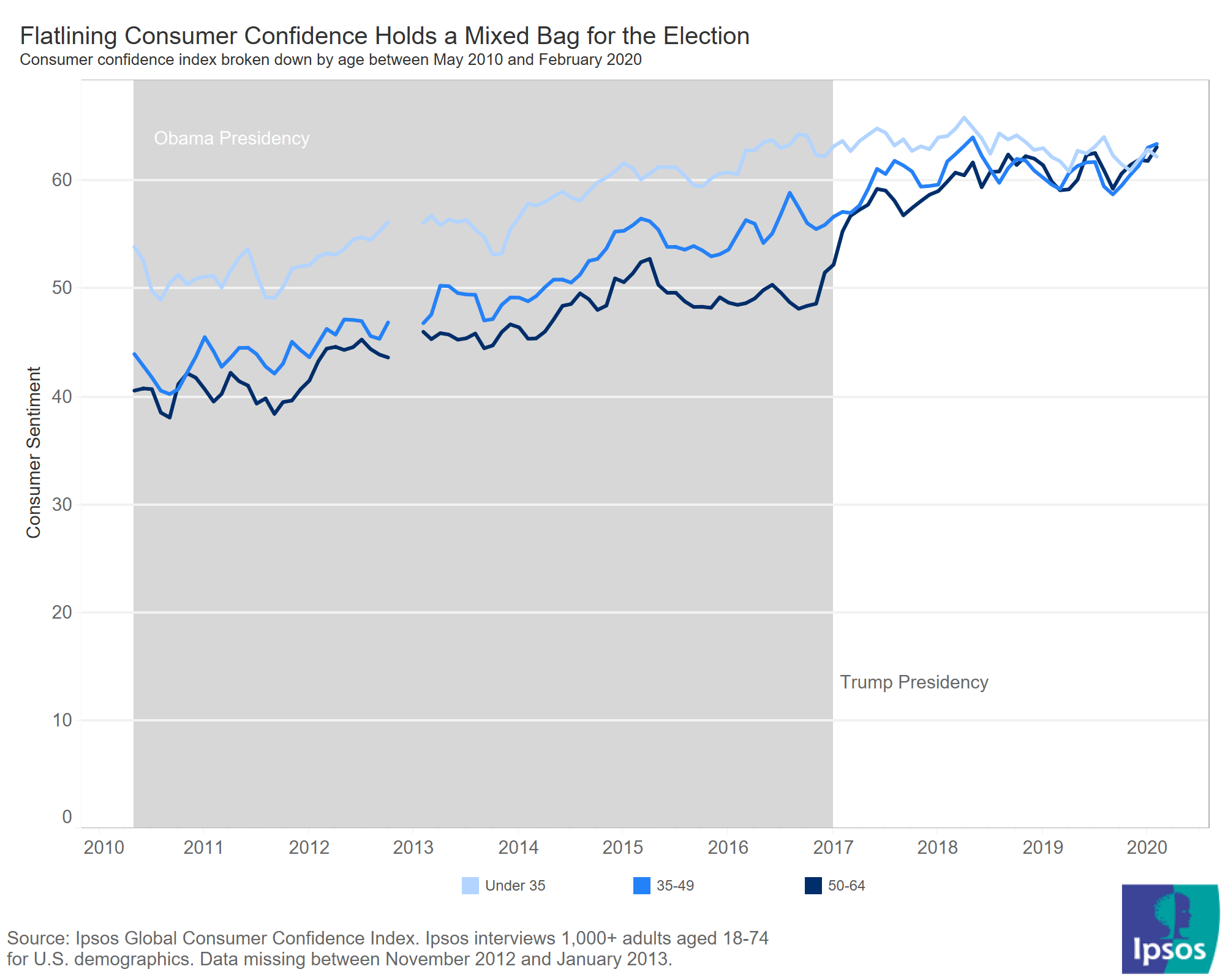 One of the factors that fueled expansion for the oldest consumers over this time period is increased confidence when it comes to making everyday purchases and bigger buys, along with a heightened sense of job security. During the Obama years, young Americans were far more confident than older people on these metrics. Since 2016, for everyone but the oldest consumers, there has been no improvement on these major indicators.

With the primary season heating up, how Americans feel about the economy is of pressing importance for campaign strategy and messaging. This all comes back to one question: is your base angry or happy with the state of the economy?

The Democratic primary candidates are choosing to base their run around one of two central strategies: firing up the base to turn out voters in record numbers or swinging middle of the road Americans fed up with Trump. Each camp is making critical assumptions about how these new voters and swing voters feel about the economy.

The progressive wing of the party, headed by Senator Sanders, is staking their electability claims on being able to turn out the vote by motivating groups like young people and people historically unengaged in the electoral process to head to the polls.

They point to President Obama’s wins in 2008 and 2012, victories driven by grassroots campaigning and massive voter turnout.

Progressives are speaking to a much younger base, who feel like they aren’t going anywhere in this economy, a sentiment borne out in the consumer confidence findings. The rhetoric of this anti-establishment wing explicitly calls out structural economic inequities as a reason for this prevailing feeling of going nowhere.  While true, particularly among the young, this is a potential tough spot for this school of thought given how high consumer confidence remains.

There is some credibility to this logic. Most recently, voter turnout for the 2018 midterms was unprecedented even with a strong economy and high consumer confidence. Turnout grew the most among voters under 30 and those between 30 and 44, moving by about 16 and 13 points respectively compared to the last midterms.

The moderate wing of the party, now consolidated under Biden, is sticking more to kitchen table issues and appealing to the disaffected moderate. Older voters make up a core part of his base, who have largely grown more satisfied with the economy under Trump. These voters aren’t interested in an economic revolution, but instead are motivated by getting President Trump out of the White House.

This camp also has some numbers on their side to support their claim. Despite the historic voter turnout in the midterms among young people, on the whole more older Americans voted than younger ones.

Looking at consumer confidence trends, this makes sense. Moderates don’t want to scare off their reliable base of happy customers by promising structural upheaval that might upset the rebalance of power these older Americans have just begun to regain confidence in.

Though a sticking point here is getting a base of voters who, while largely reliable, might not be as quick to turnout for any change, moderate or not.

That being said, the state of the economy and how consumers feel about it is by no means static. With coronavirus spreading and becoming a bigger threat, it is only a matter of time before the U.S. will more acutely feel those effects.

We know that in the countries dealing with coronavirus on a bigger scale, consumer confidence has already taken a hit. As recession fears heighten, understanding how different Americans recovered from the downturn in 2008 and how that plays into their relationship with the economy now just got more important for this election cycle.

In 2008, tumult and uncertainty played to the benefit of the out-of-power party whose messaging was one of change. A decade or more later, change is still on the ticket. How Boomers and Millennials climbed out of the Recession—and when their confidence rebounded—is the space to watch as the fractured Democratic party responds to this growing crisis and stakes their electoral futures on these respective camps.