Washington, DC, June 21, 2021 — In the race to be the next mayor of New York, a new Ipsos poll shows Eric Adams appears to be in the best position to win Tuesday's Democratic primary. He has the advantage due to a combination of solid name recognition and strong marks on dealing with the most important issue in the minds of voters, crime and safety.

However, with ranked-choice voting premiering this election, the contest is far from over. Adams currently is the first choice for only about a quarter of likely Democratic primary voters. This means there is significant opportunity for voters' second, third, fourth, and fifth options to swing the race. Our simulation suggests the ranking exercise will go all the to a head-to-head match up between two candidates before someone gets over the needed 50%+1 threshold.

In our new poll, Andrew Yang comes in second, with Kathryn Garcia and Maya Wiley tied in third. Adams looks to be in the lead because he appears (in some position) on the most voters' ballots, giving him the most routes to the 50%+1 majority. However, Yang and Garcia also are ranked on a majority of voters' ballots, giving them potential paths to victory. 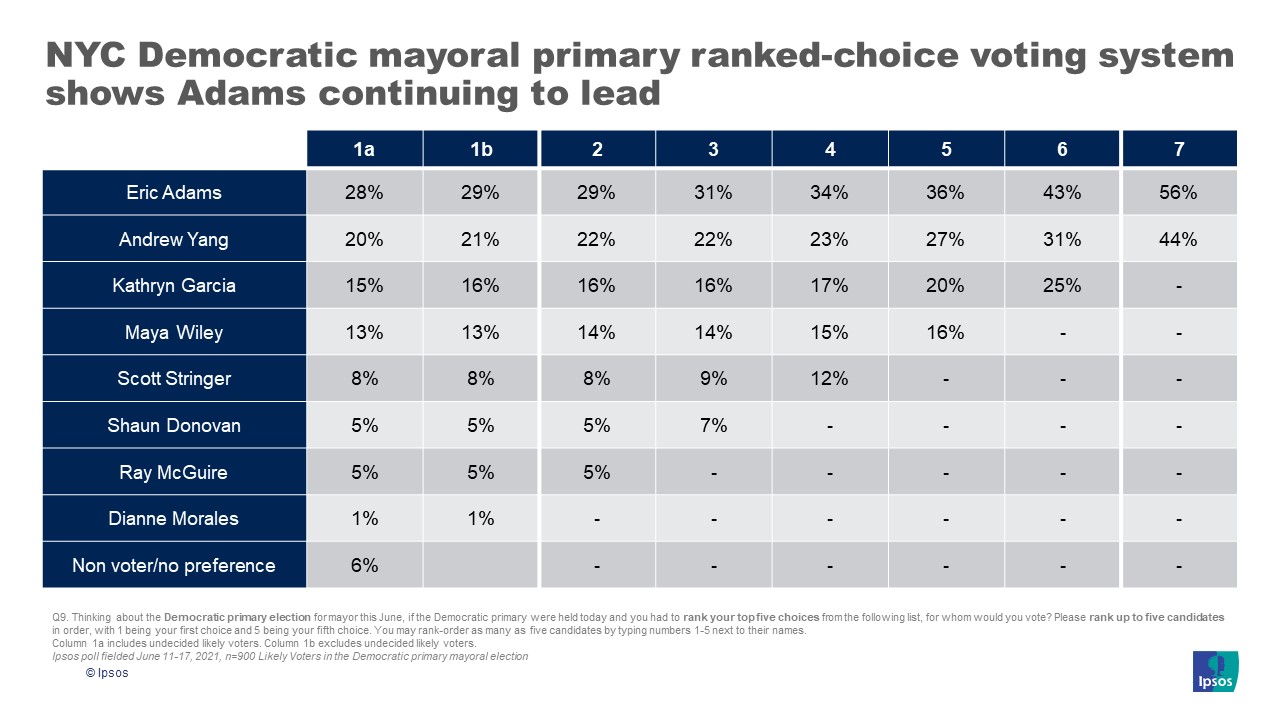 Crime and safety is increasingly seen as the number one issue by New Yorkers, currently with over half of likely voters selecting it as one of their top issues. Handling the COVID-19 pandemic, affordable housing, and reopening businesses are each top issues for about a quarter of New York voters.

When asked who is best able to handle the major issues affecting New York City, Adams has a clear lead over the rest of the candidates on the issue of crime and public safety. However, on other significant issues, he is very much in line with Yang and the other major candidates. This suggests that if crime remains top-of-mind for voters, Adams will continue to enjoy an advantage. But if the issue fades over the next day or two, or voters change their focus to other topics, his position may fade.

This Ipsos NYC mayoral primary poll was conducted June 10-17, 2021, by Ipsos using the KnowledgePanel® and the Ipsos opt-in iSay panel and panel partners. This poll is based on a representative sample of 2,924 residents of the 5 New York City boroughs age 18 or older. 457 completes came from Ipsos’ KnowledgePanel® and 2,467 from opt-in sample.

The study was conducted in both English and Spanish. The data were weighted to adjust for gender by age, race/ethnicity, education, NYC borough/county, and household income. The demographic benchmarks came from the 2014-2018 American Community Survey (ACS) 5-year file from the US Census Bureau. Additional adjustments were included for the sample that supplemented KnowledgePanel® to reduce biases known to be associated with non-probability samples, including amount of television watching, time spent on the internet, frequency of expressing political opinions online, and likelihood of being an early adopter of new products and technology. Benchmarks for these additional weighting variables were from the weighted KnowledgePanel® sample in wave 1. The weighting categories were as follows: