Washington D.C., October 1, 2022 -  With less than six weeks until the 2022 midterm elections, a new Axios/Ipsos poll finds that a slim majority of Americans are worried about divided government and split control of Congress after November. Just under half are concerned about Democrats keeping control of Congress or Republicans winning control of both chambers. Regardless of the outcome, there is one clear concern among those worried the Democrats will maintain both the Senate and House of Representatives: the economy will get worse. On the other side, those worried that Republicans will win control of both chambers of Congress cite a number of possible concerns, rather than just one issue, including: a worsening economy, gridlock, and that Republicans will shift too much of the focus to divisive social issues.

1. A slim majority of Americans are worried that the midterm elections will result in divided government and gridlock.

2. Among those who are worried that the Democrats will keep control of the Senate and the House of Representatives, there is a single point of concern: the economy and inflation getting worse.

3. While those that are worried about Republicans winning both the Senate and the House are concerned about a worsening economy, several other factors have them similarly worried. 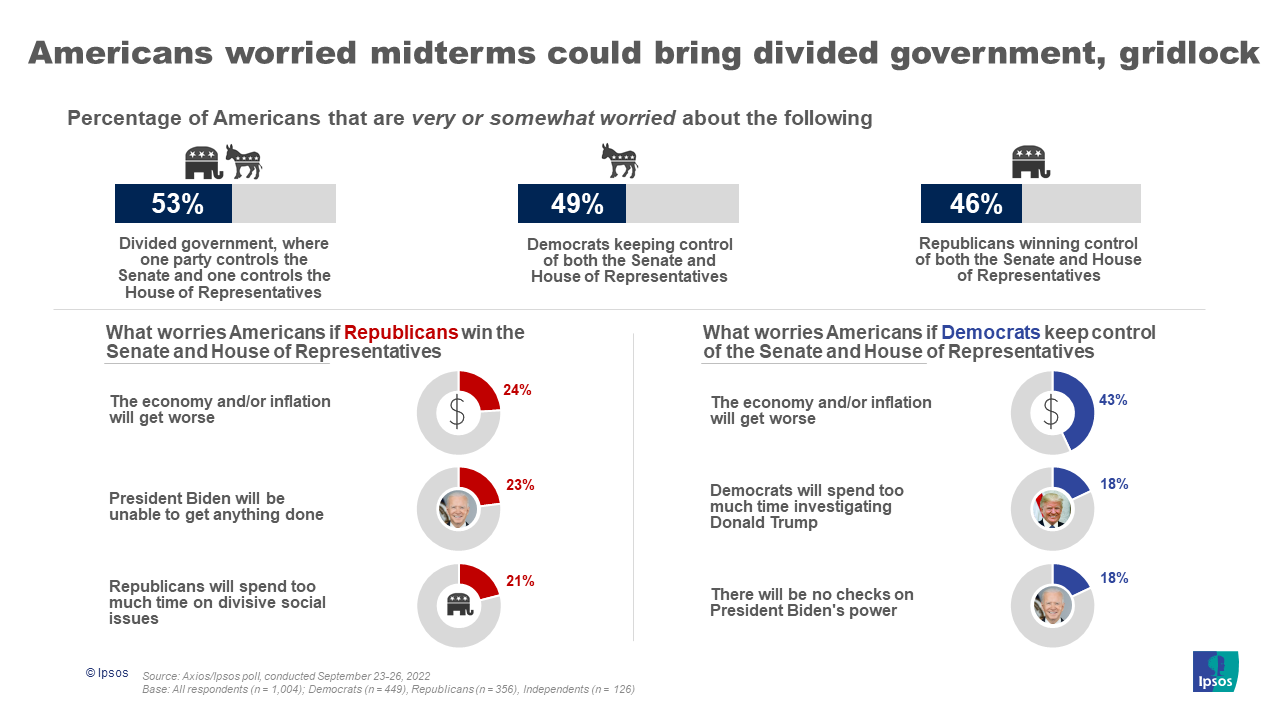 These are some of the findings of an Axios/Ipsos poll, conducted between September 23 – 26, 2022. For this survey, a sample of 1,004 adults age 18+ from the continental U.S., Alaska, and Hawaii was interviewed online in English. The sample includes 356 Republicans, 449 Democrats, and 126 independents.

Statistical margins of error are not applicable to online non-probability polls. All sample surveys and polls may be subject to other sources of error, including, but not limited to coverage error and measurement error. Where figures do not sum to 100, this is due to the effects of rounding. The precision of Ipsos online polls is measured using a credibility interval. In this case, the poll has a credibility interval of plus or minus 3.8 percentage points for all respondents. Ipsos calculates a design effect (DEFF) for each study based on the variation of the weights, following the formula of Kish (1965). This study had a credibility interval adjusted for design effect of the following (n=1,004, DEFF=1.5, adjusted Confidence Interval=+/-5.3 percentage points).

Ipsos is one of the largest market research and polling companies globally, present in 90 markets and employing more than 18,000 people