I binge-watched Ken Burns’s new documentary series Country Music over the last few weekends, and I can unequivocally say it is well worth the time. Like all his work, it is as interesting as it is profound (Country Music on PBS).

I was initially attracted to the series after reading a review by John Avlon (CNN), particularly his lead paragraph:

“We’re divided by culture as much as politics. The roots of red state vs. blue state tribalism reflect the different ways we live in rural and urban American. But while these divides run deep, they are also simplistic stereotypes that are reinforced by ignorance and insults”

As Avlon argues, Burns weaves a complex American tale showing country music’s development as an amalgamation of varied musical genres, races, religions, regions, urbanicities, and classes. Country music is, according to Avlon, a “shared American story”. After this review, I had to watch the series!

At one level, the review itself is a critique of elite America and its assumed biases. As Avlon puts it: country music is not “hillbilly” music. Here it is worth noting a vast majority of Americans today have a low opinion of elites or experts. They feel that elites collectively have failed them and a clear majority (65%) agree with the statement, “experts in this country don’t understand the lives of people like me” (Ipsos Populism Survey, 2019).

But for me, the review was a timely commentary on the state of our world for two reasons.

First, we live in highly tribal, partisan times, which makes any sort of compromise almost impossible. This dysfunctionality is here to stay, as it does not result from our momentary loss of sanity but from long-term social and technological trends (Ipsos: Our Age of Uncertainty).

There are examples of this all around us. Take the six-week government shutdown early this year, or the partisan divide on almost any issue today.

Republicans and Democrats seem to live in separate universes. A very timely and clear example of this is our ABC News/Ipsos poll, which we conducted last week on the seriousness of the accusations against President Trump on Ukraine. In this poll we found that 91% of Democrats believe this is a serious issue compared to only 32% of Republicans. 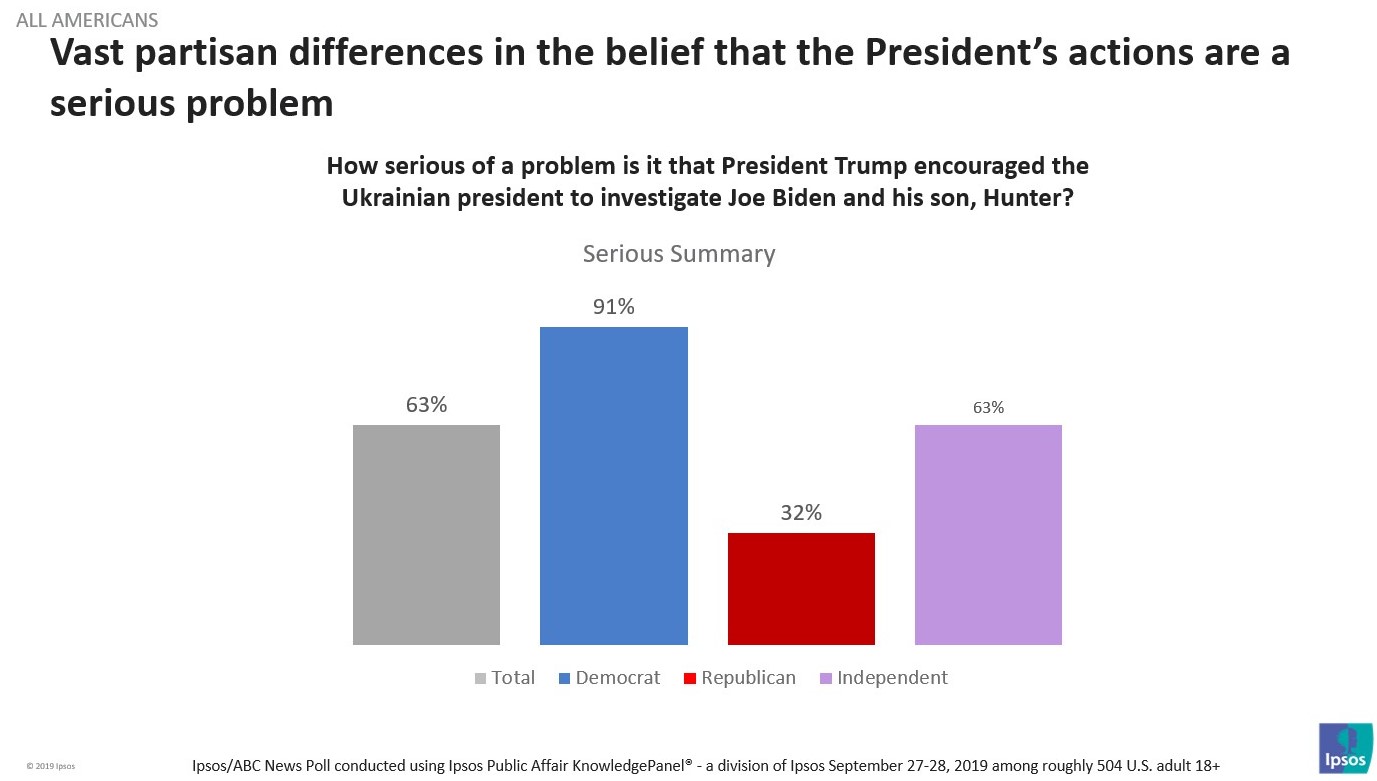 How is it possible that we as Americans see the issue so differently? This is tribalism at its core and the way it teaches us to rationalize and compartmentalize negative information for the good of the team.

Second, and perhaps more optimistically, Avlon’s message is that country music is an example of how we have more in common than we think. This is profound. Indeed, today, Americans sorely need things to bring us together rather than drive us apart. According to Avlon, country music is one of these places where a shared experience and history draw people together.

But after reading his review and watching Country Music, I asked myself: Is this true? Is country music more unifying than dividing? To test this, we ran a poll to gauge the degree of tribalism related to different media genres, including country music and musical artists.

What did we find? 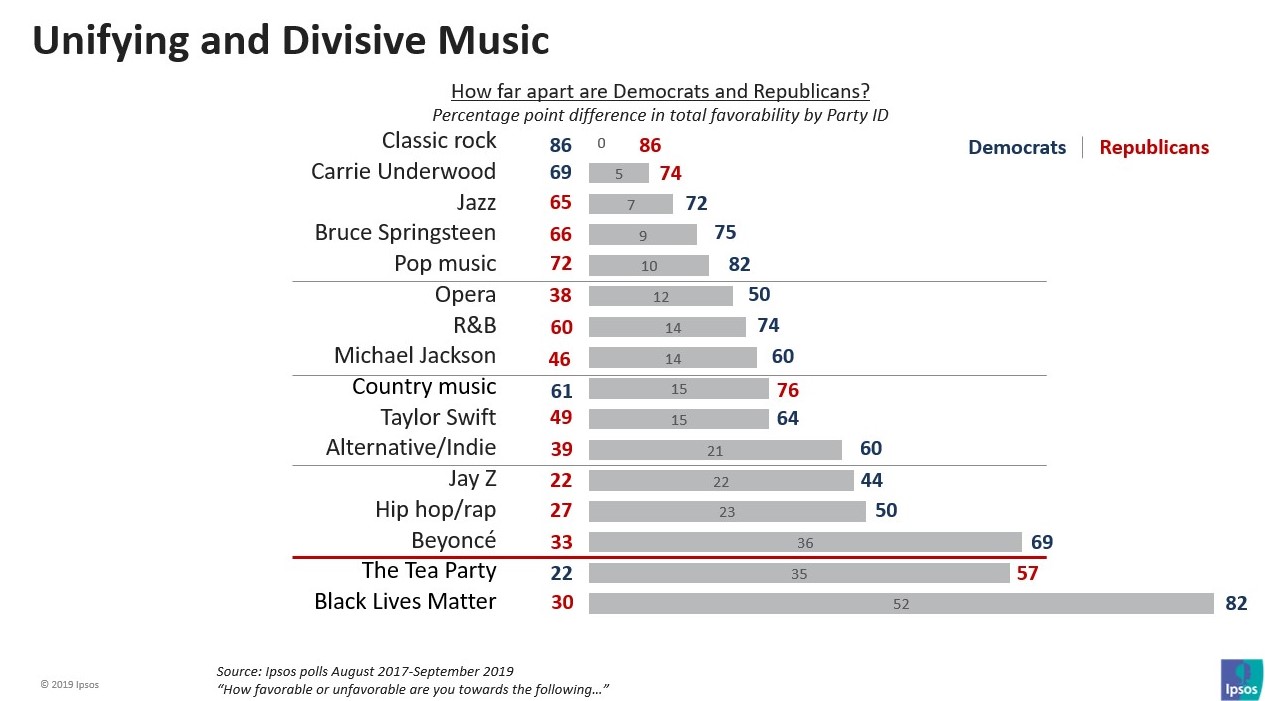 To measure tribalism, we used the most salient tribes in contemporary American society: Democrats and Republicans. We conducted a survey asking Americans if they felt favorable or unfavorable towards various genres of music and artists. Compared to truly divisive topics like Black Lives Matter (52 percentage point difference) or the Tea Party (35 percentage point difference), country music is a relatively shared value, but it is by no means the genre that most unifies American society.

Our survey found that classic rock is the most popular and the most unifying with no difference in total favorability between Democrats and Republicans. Country music, on the other hand, has a 15 percentage point partisan gap.

Stepping back, our data indicates that many cultural elements of American society are not as divisive as a casual perusal of cable news would indicate. The reality is that compared to polarizing political topics, what most Americans do with their day-to-day lives, and this includes the music they listen to, is more unifying than not. In the spirit of Avlon’s message, in these highly polarized times, it is incumbent on all of us to find those shared experiences that bind us. To wit, I know now that to keep the peace at this year’s Young family Thanksgiving dinner, I plan on talking music and not politics.