Washington, April 21, 2020 — A new Ipsos poll conducted in the United States and 13 other countries, finds that 71% of adults globally and 59% in the U.S. agree that, in the long term, climate change is as serious a crisis as Covid-19. The survey shows widespread support for government actions to prioritize climate change in the economic recovery after Covid-19, as 65% globally and 57% in the U.S. agree that it is important. The survey was conducted online among more than 28,000 adults, including 2,003 Americans, April 16-19, 2020.

Another Ipsos poll conducted in 29 countries finds that climate change ranks as the most important environmental issue globally and in the United States. Large majorities of those surveyed both across the world and in the U.S. agree that, if their government does not act now to combat climate change, it will be failing the people of their country. That survey was conducted online February 21- March 6, 2020 among more than 20,000 adults, including 1,000 Americans.

“Even during the coronavirus pandemic, most people throughout the globe, including here in the United States, continue seeing climate change as a major threat,” said Chris Jackson, Senior Vice President, U.S Public Affairs with Ipsos. “Indeed, when asking them directly whether it’s as serious a crisis as Covid-19, more than half of Americans say yes. Likewise, a solid majority call for the government to make climate change a priority in the economic recovery after Covid-19.” 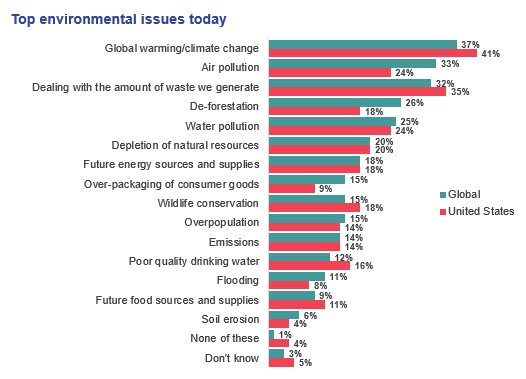 A majority of the public globally (68%) agree that if their governments do not act now to combat climate change, they will be failing their citizens.

Globally, nearly six in ten (57%) say they would be put off from voting for a political party whose policies do not take climate change seriously.

Majorities of citizens across the world feel they are likely to make changes to their own behavior to limit personal contribution to climate change. Actions that people globally are most likely to do in the next year:

Globally, the public is more divided when it comes to undertaking less comfortable and convenient lifestyle changes, and Americans are especially reluctant to do so:

The findings come from two surveys conducted by Ipsos on the Global Advisor online platform.

One is a 14-country survey conducted April 16-19, 2020 among 28,029 adults aged 18-74 in Canada and the United States and 16-74 in Australia, Brazil, China, France, Germany, Italy, India, Japan, Mexico, Russia, Spain and the United Kingdom. The sample consisted of approximately 2,000+ individuals in each of the 14 countries. This report for this survey is for subscriber use only and not for public release.

The samples in Argentina, Australia, Belgium, Canada, France, Germany, Great Britain/UK, Hungary, Italy, Japan, the Netherlands, New Zealand, Poland, South Korea, Spain, Sweden, and the U.S. can be taken as representative of these countries’ general adult population under the age of 75. The samples in Brazil, Chile, China (mainland), Colombia, India, Malaysia, Mexico, Peru, Russia, Saudi Arabia, South Africa and Turkey are more urban, more educated, and/or more affluent than the general population. The survey results for these markets should be viewed as reflecting the views of the more “connected” segment of these population.

The data is weighted so that each market’s sample composition best reflects the demographic profile of the adult population according to the most recent census data. Where results do not sum to 100 or the ‘difference’ appears to be +/-1 more/less than the actual, this may be due to rounding, multiple responses or the exclusion of don't knows or not stated responses. The precision of Ipsos online polls are calculated using a credibility interval with a poll of 1,000 accurate to +/- 3.5 percentage points and of 500 accurate to +/- 4.8 percentage points. For more information on the Ipsos use of credibility intervals, please visit the Ipsos website (www.Ipsos.com).