New York, NY, June 9, 2020 — Ipsos’ LGBT+ Pride 2021 Global Survey points to a wide generation gap around gender identity and sexual attraction. On average, across the 27 countries surveyed, those who identify as transgender, non-binary, non-conforming, gender-fluid, or other than male or female make up 4% of Gen Z (born since 1997) compared to 1% among all adults. Younger adults are also significantly more likely to identify differently from heterosexual and to say they are equally attracted to both sexes. 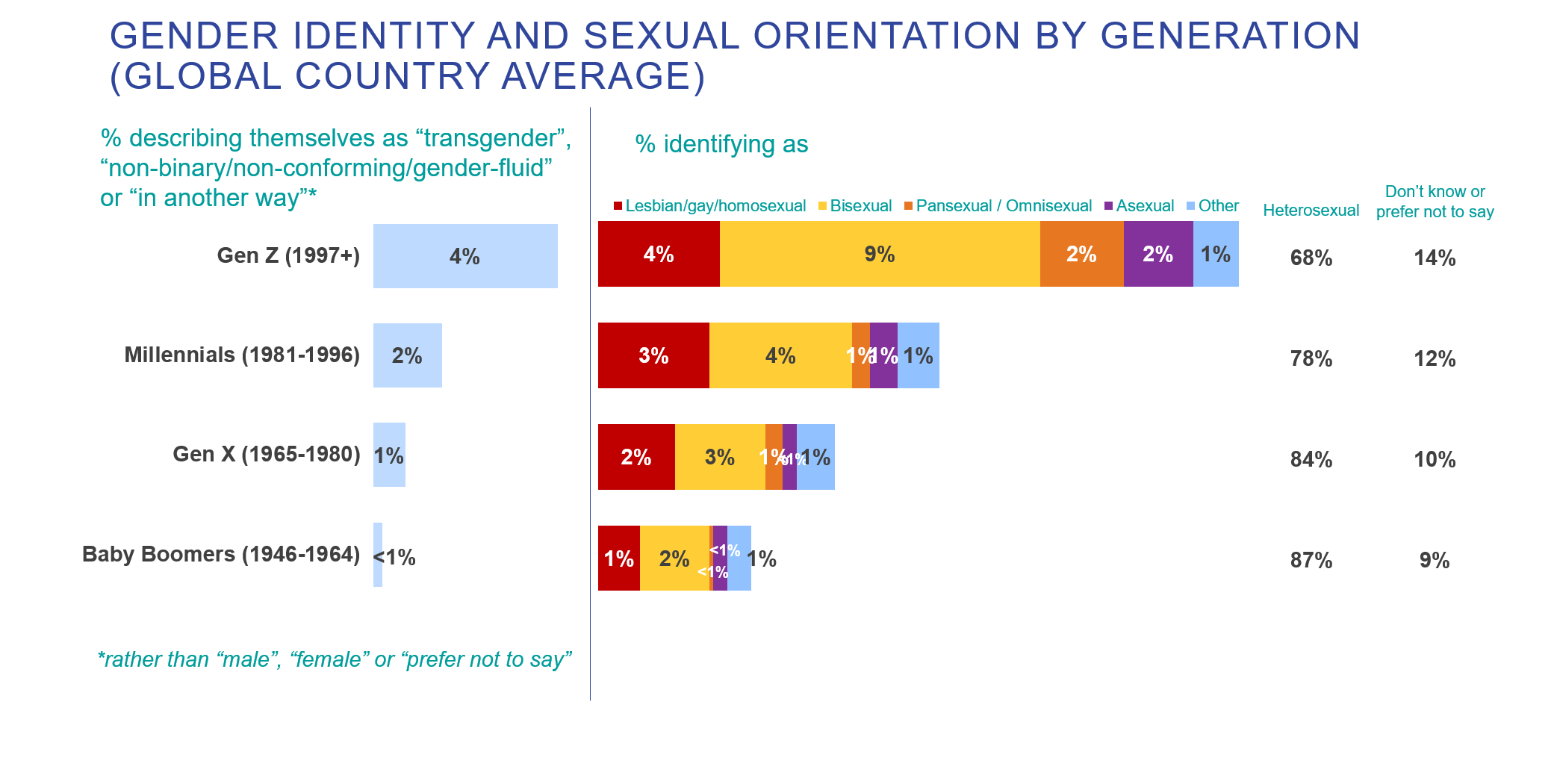 The survey, which was conducted on Ipsos’s Global Advisor online platform among more than 19,000 individuals aged 16 (or 18, depending on the country) to 74 between April 23 and May 7, 2021, shows how much exposure to LGBT+ people and engagement with the LGBT+ community varies across the world. For example, 66% in Brazil report having a gay or lesbian relative, friend or colleague vs. 7% in Japan and South Korea.

In the United States, 57% say they have a relative, friend or co-worker who is lesbian or gay, 30% one who is bisexual, 14% one who is transgender, and 14% one who is non-binary, non-conforming or gender-fluid.

Anti-discrimination laws and equal marriage and adoption rights for LGBT people are supported by majorities in most of the 27 countries, including the U.S., but are fiercely opposed in several countries. In the U.S.: 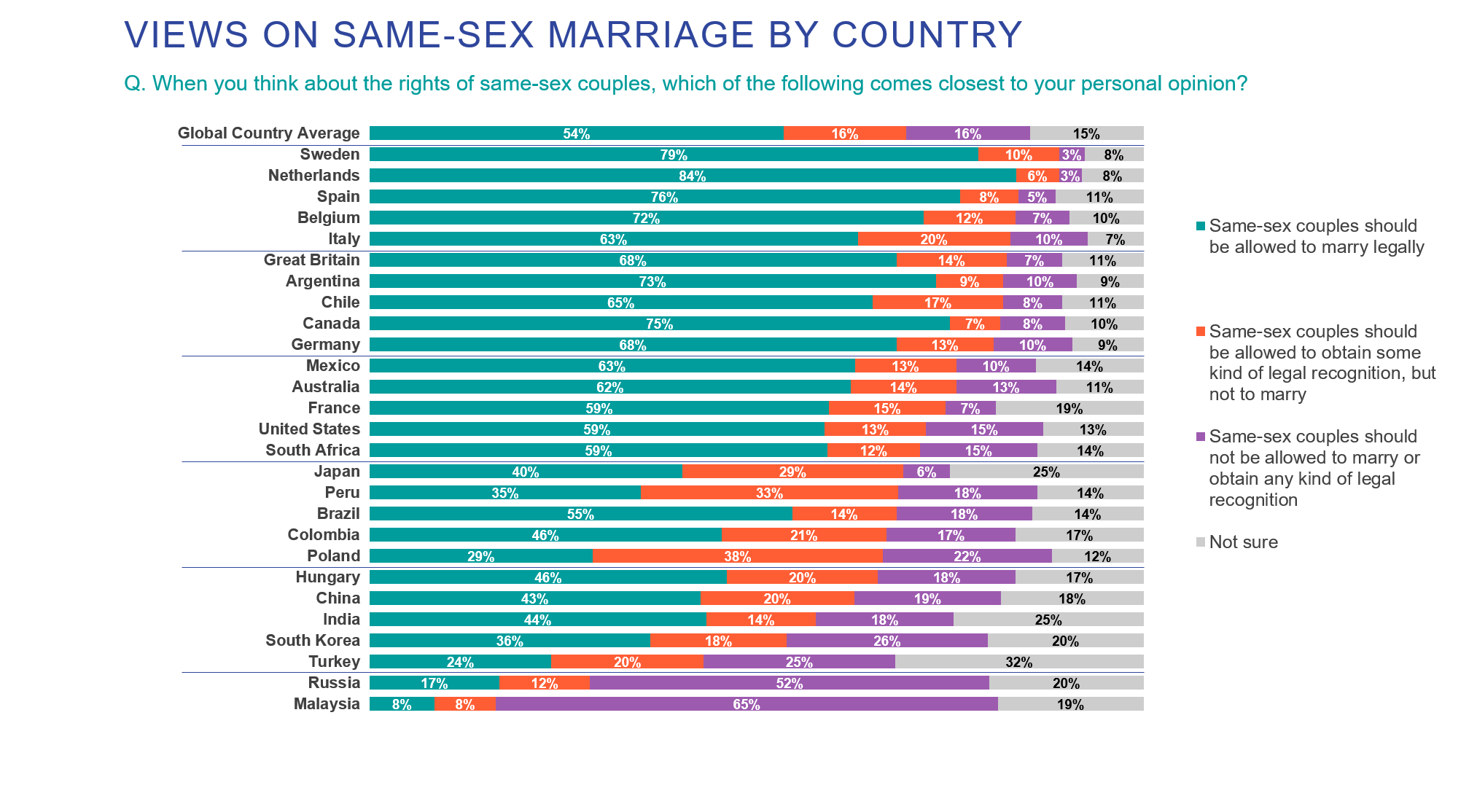 The survey also finds a lot more support than opposition toward corporate activism promoting equality – 47% support vs. 19% opposition on average globally, 48% vs. 20% in the U.S.

There is a great deal of support in most countries for lesbian, gay and bisexual athletes in sports teams being open about their orientation. On the other hand, when it comes to allowing transgender athletes to perform according to the gender they identify, public opinion is divided and varies widely across countries. On average globally, 32% support it, 32% oppose it and 36% are neutral. In the U.S., 27% support it, 45% oppose it, and 28% are neutral.

Americans’ opinion on whether to allow transgender athletes to perform based on the gender they identify with largely reflects their political party identification: more Democrats support it than oppose it (42% vs. 24%), while most Republicans oppose it (75% vs. 11% who support it). 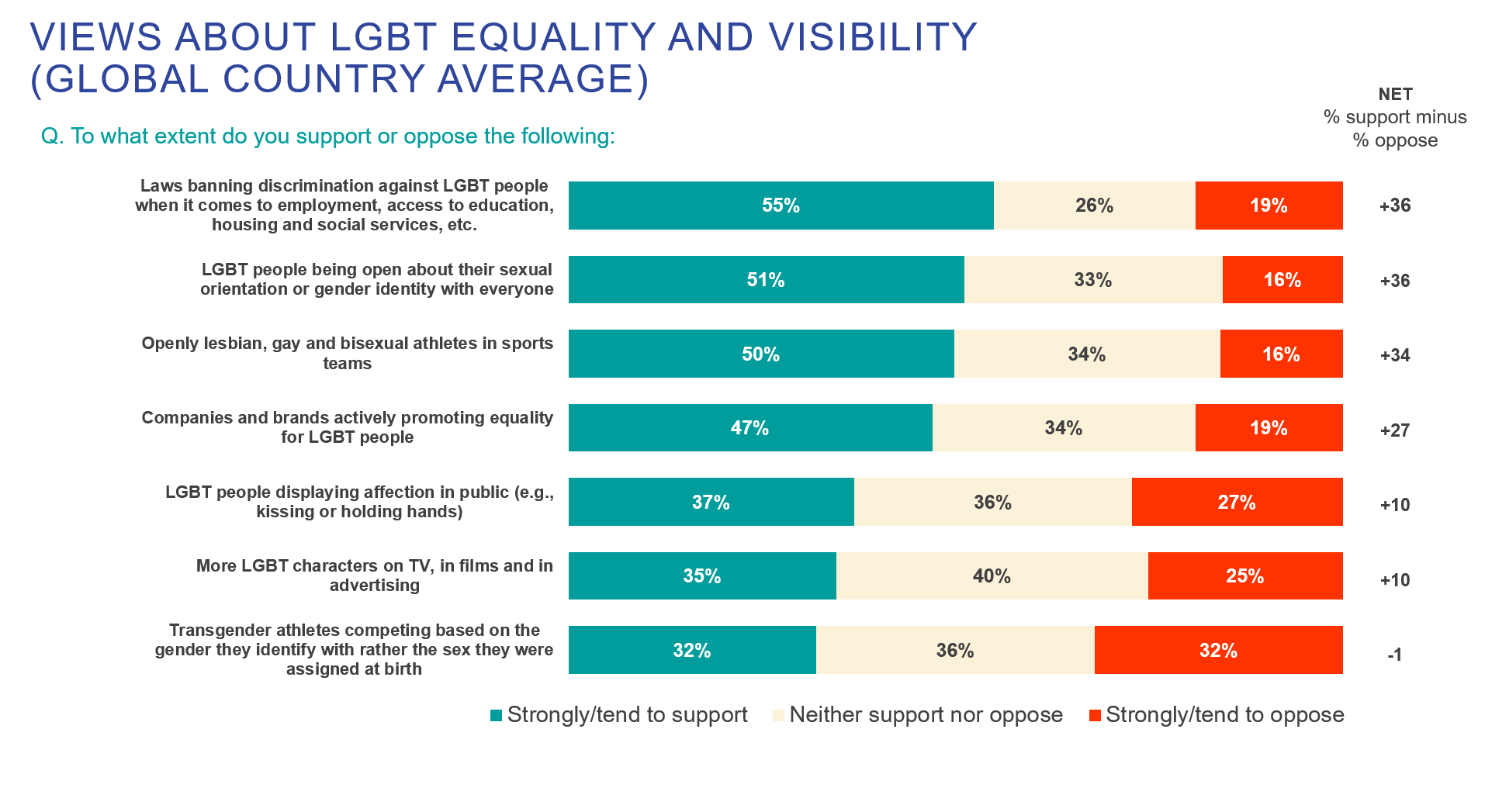 These are the results of a 27-market survey conducted by Ipsos on its Global Advisor online platform. Ipsos interviewed a total of 19,069 adults aged 18-74 in the United States, Canada, Malaysia, South Africa, and Turkey, and 16-74 in 23 other markets between April 23 and May 7, 2021.

The samples in Brazil, Chile, China (mainland), Colombia, India, Malaysia, Mexico, Peru, Russia, South Africa and Turkey are more urban, more educated, and/or more affluent than the general population. The survey results for these countries should be viewed as reflecting the views of the more “connected” segment of their population.

Where results do not sum to 100 or the ‘difference’ appears to be +/-1 more/less than the actual, this may be due to rounding, multiple responses or the exclusion of don't know or not stated responses.