Conducted by Ipsos among 12,400 people in 11 European countries, this wide-ranging survey provides an overview of the behaviour and perceptions of Europeans behind the wheel. It makes it possible to monitor the evolution of risky behaviours and good practices in order to better target prevention campaigns in France and other European countries. In the midst of the ongoing pandemic, it also looked at how attitudes towards the traffic code correlated with attitudes towards public health measures.

Traffic code and public health guidelines: bending the rules here and there is common 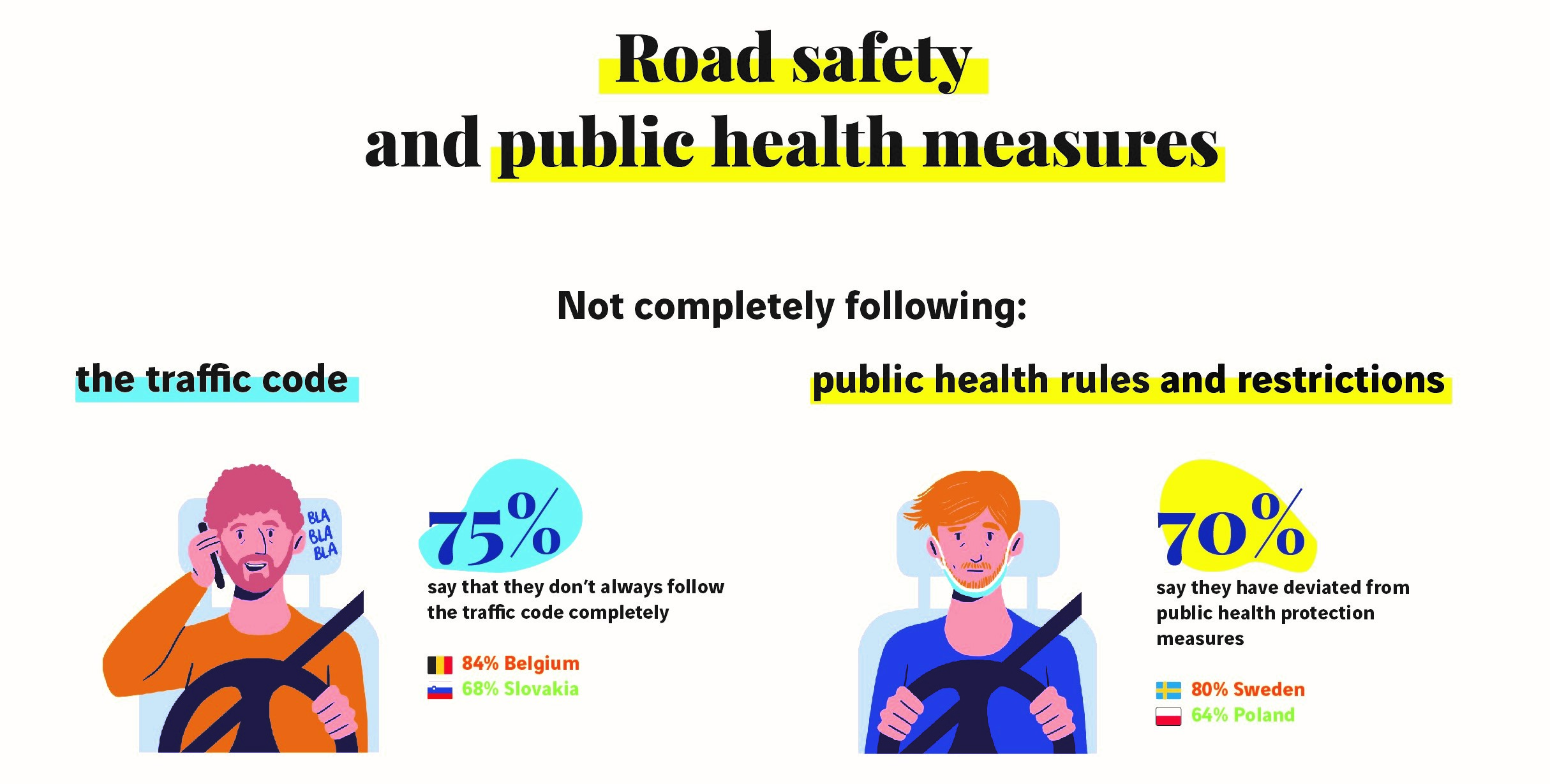 ⇒ 77% of European drivers who take liberties with the traffic code do the same with public health guidelines.

⇒11% have had or nearly had an accident because they were using their phone while driving.

Incivilities: despite some behavioural changes, there is still plenty of tension on the road

⇒ 84% have felt afraid of other drivers’ aggressive behaviour.

Drowsiness: risk-taking is still too widespread and some best practices are down

⇒ 12% have had or nearly had an accident due to falling asleep at the wheel.

Whether they are part of the traffic code or public health guidelines, rules are often seen more as constraints than as a form of protection. When drivers allow themselves to bend the rules a little, they are focusing on their immediate benefit and ignoring the potential risk of an accident, hoping that they are in enough control to avoid it. The vast majority of accidents, however, occur when people have not fully accounted for the risks of violating the traffic code.

Traffic code and public health guidelines: bending the rules here and there is common

People who say they follow the rules seem to be mostly motivated by the goals of these rules, namely avoiding the risk of having an accident or getting infected. In all cases, the fear of penalties was the least motivating factor. Thinking about others was a much more common justification for following health guidelines (mentioned by 45%) than it was for road safety (33%), especially when people were thinking about their friends and family (23% vs. 11% in Europe). While French people were the most concerned with their own safety on the road (33% vs. 28% for health guidelines), this motivation and preference were less prevalent in Europe and in the United Kingdom (26% for following the traffic code vs. 27% for following public health guidelines). Trust in the well-foundedness of the traffic code motivates 30% of European drivers vs. 17% for health guidelines. Fear of penalties was a weak motivator for rule-following (11% of European respondents for both the traffic code and health guidelines).
Because they are less aware of their own behaviour, fewer British people than the European average admit that they would probably be at least partly at fault in the case of an accident (34%) and to a lesser degree, they are also less likely to admit personal responsibility if they catch Covid-19 (40%).

...especially behind the wheel
A particularly high number of British drivers violate the traffic code:

Despite a slight decrease, drivers remain keenly aware of the dangers of inattentiveness: 54% of European drivers   identify it as one of the main causes of deadly accidents on the roads in general, compared to 40% for motorways in particular. Also, 11% of European drivers have already had, or almost had, an accident due to someone using their phone while driving.
However, more and more drivers are adopting dangerous behaviours around distractions:

Incivilities: despite some behavioural changes, there is still plenty of tension on the road

During these difficult times, European and British drivers have become a little less critical of their fellow drivers on the road: they see them as less stressed (32%, -6 points) and aggressive (26%, -2), and more attentive behind the wheel (18%). Still, these other drivers have not become blameless in their eyes. 79% (-4) used at least one negative adjective to describe them, most often calling them irresponsible (46%) and dangerous (26%, -2). Their judgement of themselves remained unchanged, with 97% using at least one positive adjective to describe their own driving and only 12% (-2) admitting to at least one error.

Some drivers, however, are aware that getting in the car can have a negative influence on their behaviour. In fact, 12% of European drivers say that they are not really the same person when they get behind the wheel, becoming more nervous, impulsive, or aggressive than normal. For 18% of these drivers, the protection of being in their car makes them feel like they are “in a bubble” so they pay less attention to other people. 13% of them even feel that on the road, “it’s every man for himself”.

Aggressive behaviour and incivilities behind the wheel are slightly down compared to 2020, but they remain all too common: 52% (-3) of European drivers say that they have insulted other drivers in the past, 47% (-4, 36%, -9) have honked their horn impatiently, 30% (-3) have deliberately tailgated a driver who’s annoying them, 30% (-4) have passed on the right on the motorway.
This change should be put into context, however, since 20% of European drivers don’t hesitate to get out of their car and explain themselves, while the number of drivers who say they have been afraid of the aggressive behaviour of another driver has remained at a high level (84%).

Drowsiness: risk-taking is still too widespread and some best practices are down

French people are more aware of the risk of drowsy driving on the motorway, listing drowsiness as their number 2 risk (38%, just after excessive speed, 39%) for the first time since 2014. Europeans in general placed drowsiness as the number 4 cause of deadly motorway accidents (20%). There were, however, many Europeans who reported that drowsiness had caused an accident or incident they had been involved in:

24% (-4) of European drivers, however, believe that they can still drive when tired and 35% (-16) will do so, even if they feel very tired, because they have no other choice.

On long trips, some practices that can lead to drowsy driving are down, but they are still too common:

At the same time, some good habits that are highly effective in preventing drowsiness are on the decline:
83% of drivers plan their departure time based on when they will be the least tired.

The amount of time that people drive before they take a break also decreased slightly: 3:02 (-4min) for European drivers. As for the recommendation that drivers take a break every two hours, 40% (-5) of European drivers do not follow it, despite it being known to 73% of them. Among those who do not follow this recommendation, 47% say that they only stop when they feel very tired and 18% think that this recommendation is too strict and not adapted to their situation. 8% say that they don’t have enough time to take a break every two hours.

Survey methodology:
To conduct the Responsible Driving Barometer survey, from 9 to 22 March 2021, Ipsos conducted an online survey of 12,400 people aged 16 and over, including 2,400 French people and at least 1,000 people in each of the 10 other countries surveyed (Germany, Spain, France, United Kingdom, Greece, Italy, Netherlands, Slovakia, Sweden). The representativeness of each sample is ensured by the quota method.

About the VINCI Autoroutes Foundation for Responsible Driving
Founded in February 2011, the VINCI Autoroutes Foundation for Responsible Driving is a laboratory, observatory and source of information specifically dedicated to changing driver behaviour.
Primarily focused on improving road safety, it aims to promote responsible road behaviour and, in 2018, it expanded its sphere of action to include environmental and educational measures (“responsible behaviour”).
Its work includes:
-    innovative scholarly research into certain areas of risky driver behaviour, into protecting the environment, and into the use of education and reading as a means to improve driver behaviour.
-    carrying out information campaigns to raise awareness of road risks.
-    funding initiatives by non-profit associations and citizen initiatives aimed at encouraging responsible driving.
http://fondation.vinci-autoroutes.com and Twitter account: @FondationVA, Facebook and Linkedin
http://roulons-autrement.com and Twitter account: @RoulonsA