Ipsos is proud to say that last night’s Ipsos / GfK NOP Exit Poll for BBC News / ITV News / Sky News is proving to be an excellent indicator of the final results at the polls, as it was for the 2010 general election, as the table below shows. 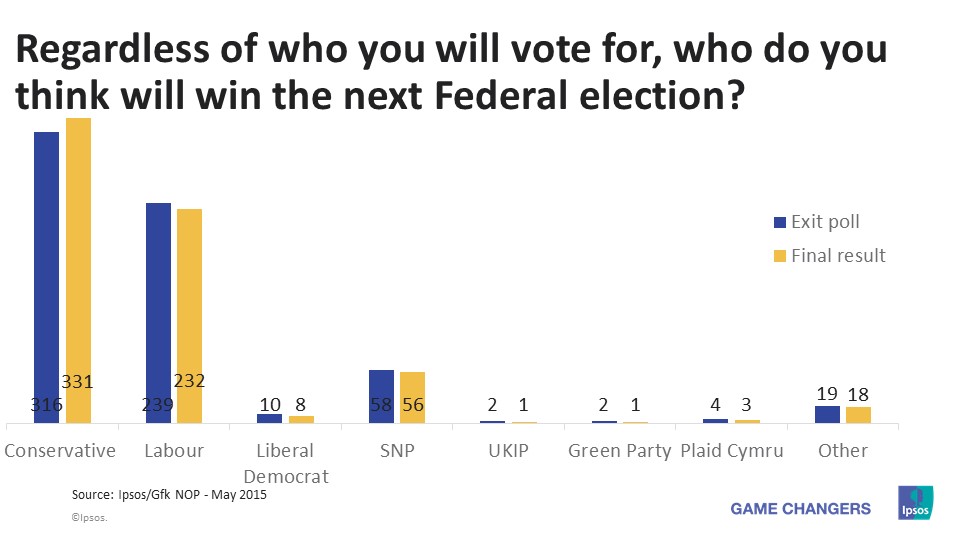 Focus was on difficulty of predicting "challenger parties" - but actually did pretty well on that, all with average error of less thon 1.5 percentage points: polls caught SNP and UKIP surge, Lib Dem collapse, Greens soft Problem was Conservative and Labour vote shares.

Our Scottish polling for STV was also the first to see the SNP surge there, with our last poll in Scotland predicting the huge swing to SNP that we have witnessed.

However this was not as successful an election for the polling industry as a whole as previous elections, and Ipsos supports the British Polling Council cross-industry review. This will help understand the performance of the polls, where they were less accurate, and lessons to be learnt. More positively, our polling in the last few weeks indicated a Conservative lead, and our vote share for the Conservatives in our final poll for the Evening Standard was most accurate.

We also correctly predicted the Lib Dem collapse, the dramatic increase in the UKIP vote and the failure of the Greens to do quite as well as many have expected, all well within the margin of error.

Most opinion polls have a margin of error of 3-4% and very small differences in vote share can lead to big differences in seat share. As the table below suggests our final results were within margin of error for all the parties except for Labour, who we overestimated. As we do after every election, we will be carrying out an internal review into our polling, how it can be improved and lessons that can be learnt, in order to become more accurate in the future.