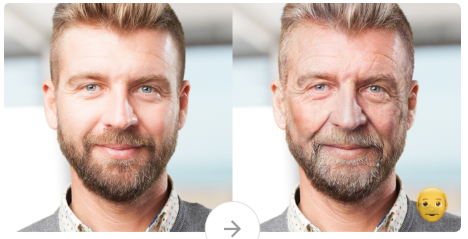 You’re probably seeing a lot of pictures of old people on social media as the latest craze over the “FaceApp Challenge” has children looking like seniors.

FaceApp allows you to “meet your future self” by dramatically aging digital images of people.

To say that it’s gone viral is an understatement. FaceApp is the top free app on both Apple’s App Store and Google Play -- where it’s been downloaded more than 100 million times.

In the last week, face-aging apps were four of the top five apps in the Apple store, and accounted for half of the top 10 apps on Google.

This latest obsession of aging yourself may seem like a cool thing to do, but how do people really feel about getting older?

In an Ipsos Global Advisor survey of over 20,000 people in 28 countries done between August and September last year, just one in three people (33%) said they were looking forward to old age.

Those who are looking forward to old age 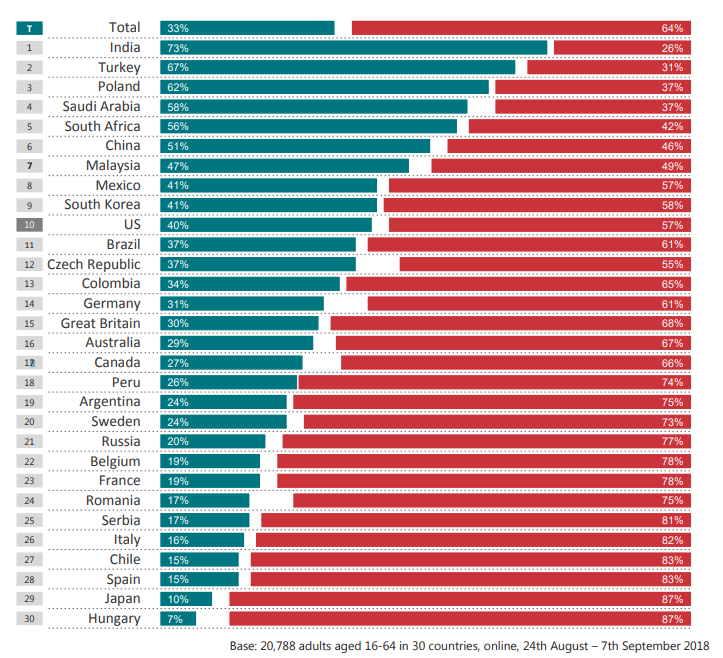 Key: Green – a great deal/fair amount; Red – not very much/not at all

Meanwhile, the global average for when people think old age begins is 66, but this number varies depending on the age group. Younger people believe old age happens earlier, while older ones think it happens later.

The authors of the report – Nicolas Boyon, Chris Jackson and Emily Chen – said although the results varied by countries and demographics, the study showed high levels of concern about aging.

More than half (52%) of the respondents said they were worried about getting old – with people in Brazil, China, Russia, Malaysia and Spain the most concerned -- while those in South Korea, Saudi Arabia, Belgium, India and France least worried.

“While people around the world recognize that there are positives to getting old, including having more time to spend with friends and family, more time for hobbies and leisure, more time for holidays and giving up work, they also identify a number of downsides,” the authors said.

“Globally, three in ten worry about not having enough to live on with a quarter worrying about losing mobility and losing memory.”

What’s best about getting old 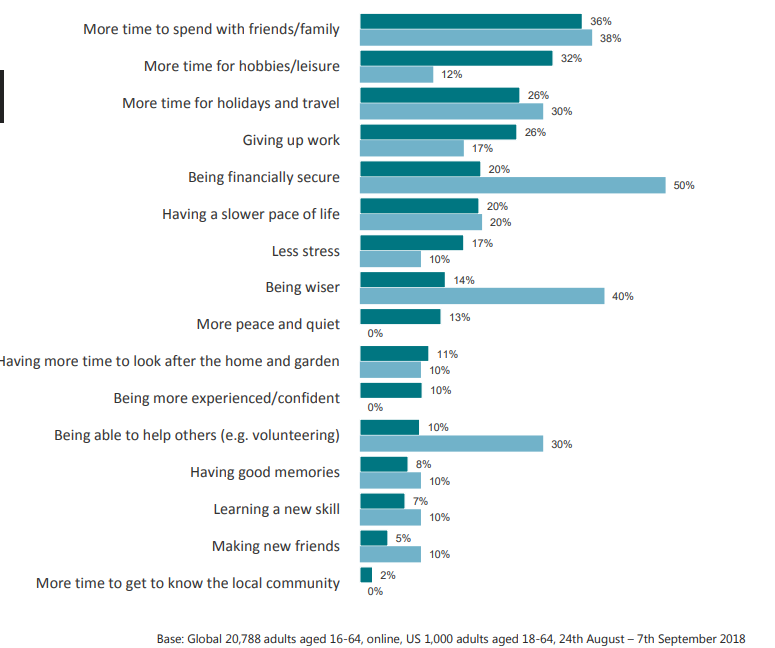 What’s the worst thing about getting old 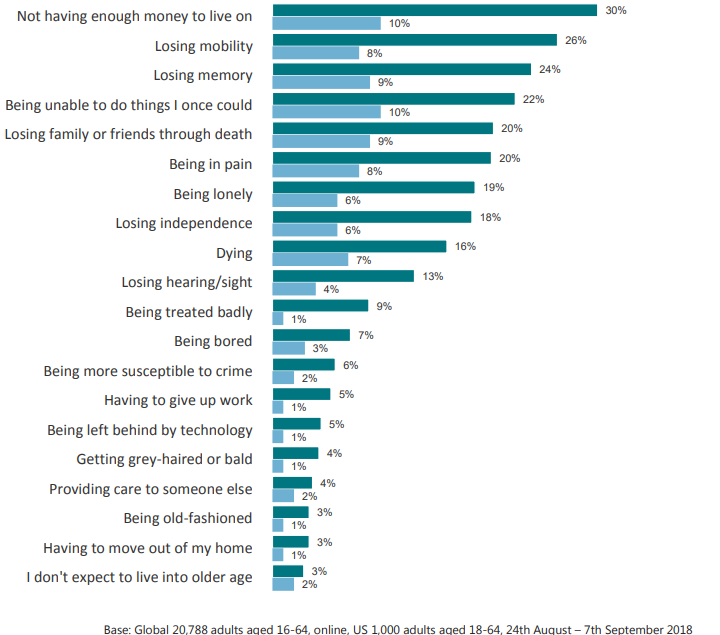 Despite the majority of those surveyed saying they expect to be fit and healthy in old age, many worried about losing an edge in other aspects of life.

More than half of the people (60%) around the world agreed that there was a lack of respect towards the elderly. Added to that, less than 30 per cent said elderly people have too much political influence.

“Younger people [are] more likely to think that old people do have too much influence politically,” the authors said. 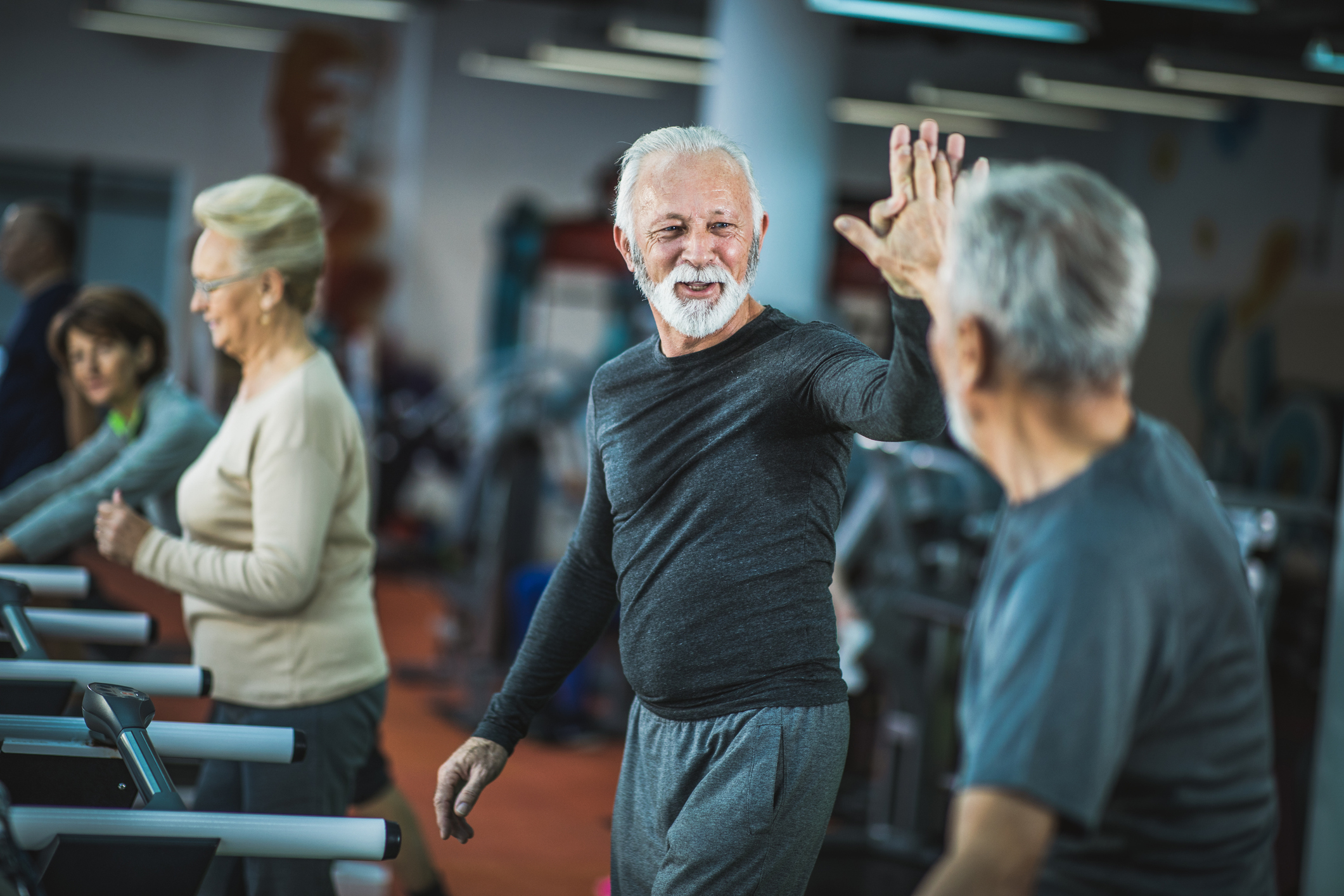 But even with the downsides associated with aging, nearly two-thirds of the respondents (64%) said it was possible to prepare for becoming old. Regularly exercising, eating healthy and saving money for retirement are considered the top ways to prepare yourself.

But the authors said there was a gap between what we know we should to do prepare for old age, and what we are doing.

“When asked what people are doing in order to prepare for old age, the most popular answer globally is avoiding smoking, mentioned by over two in five (45%),” the report said.

“Under three in ten (28%) mention saving enough money for an adequate pension.”