A majority of people in 14 major countries support the peaceful protests and demonstrations that have taken place across the United States after the death of George Floyd, according to the latest Ipsos poll.

In a survey of more than 15,000 people conducted on June 4 to 7, support for the action is highest in neighbouring Canada (81%), Germany and India (80%), the United Kingdom, South Africa and Mexico (79%). Russia is the only country among the 15 polled where almost a third (30%) of respondents oppose the peaceful protests. 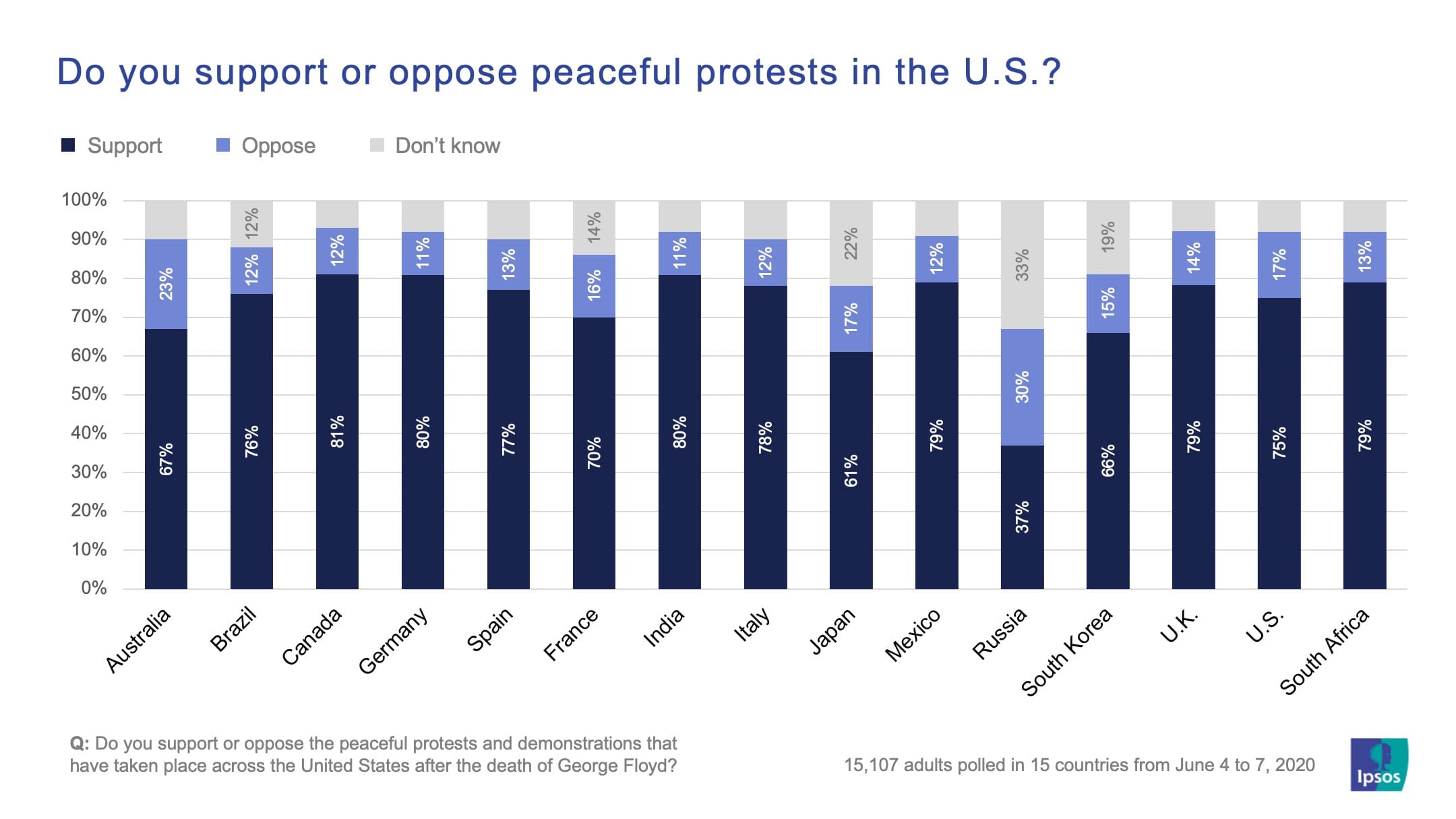 But added to this, a majority of people in all of the countries agreed that peaceful protests and demonstrations are an appropriate response to the killing of an unarmed man by police. Respondents in the U.S. (80%) are among the most likely to agree with this, along with those in Canada (82%), Germany (81%), and the U.K. (80%). Still, about a third of people in South Korea (33%) and Japan (30%) disagree.

On other end, a majority of people in 12 countries don’t think more violent protests and unrest are an appropriate response to the killing of an unarmed man by police. This sentiment is highest in Australia at (72%), followed by the U.S. and Canada (71%) and the U.K. (70%).

Only more people in India (50%) agree that more violent protests and unrest are an appropriate response, while those in Russia are most divided on this issue with only 3 percentage points separating those that agree and disagree, followed by Brazil (10 points). 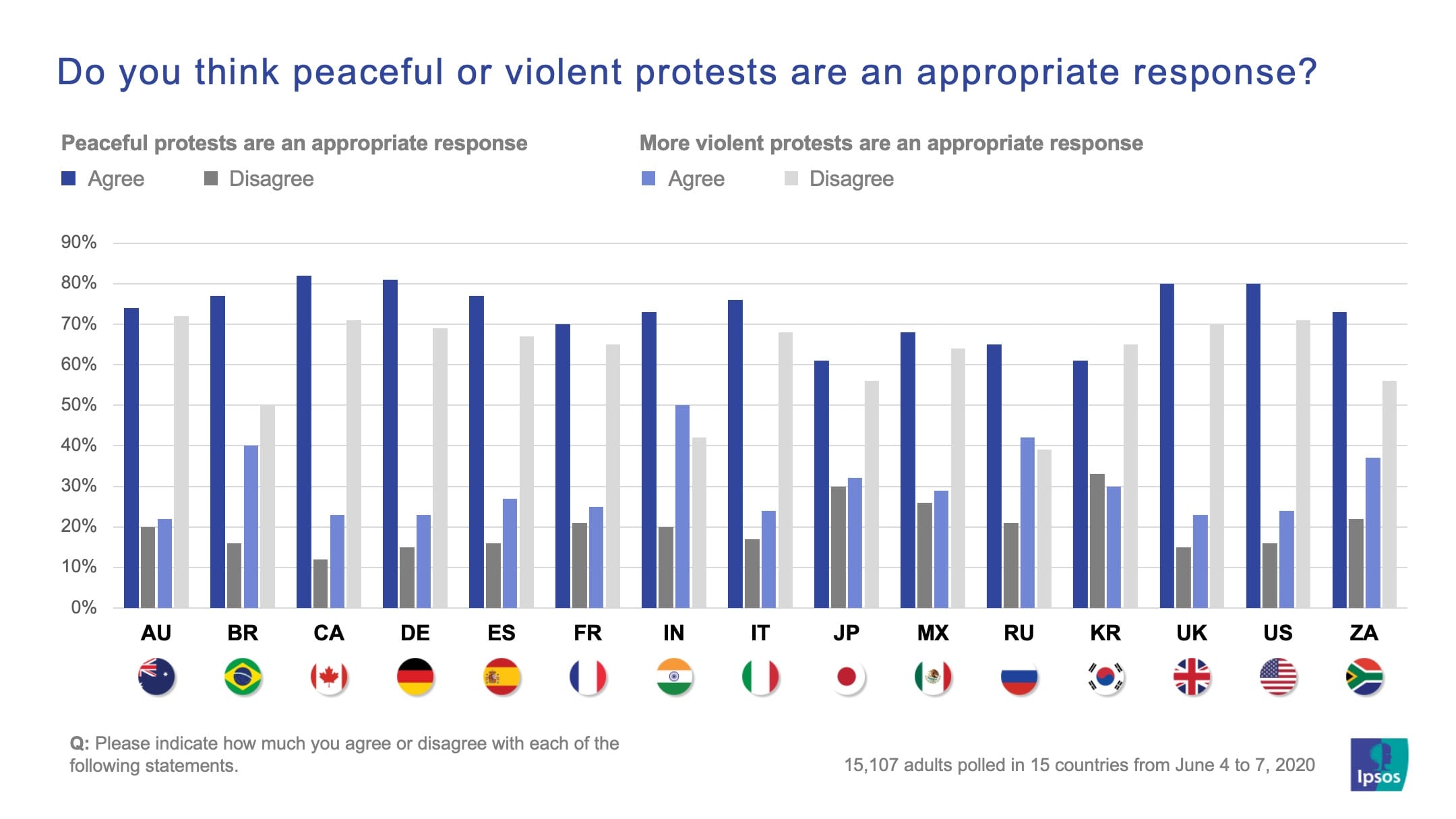 Overall, a majority of respondents in almost all countries are sympathetic to people who are out protesting right now with this sentiment lowest in Japan at (50%).

At the same time, a majority of people in all countries, except India, are not surprised that these protests happen in a country like the U.S. Four in five people in Canada and France (80%) feel this way, followed by the U.K. (78%), Germany (77%) and Spain (71%). India is the only country where a majority (71%) say they are surprised by such protests in the U.S., with this sentiment also high in other emerging markets of Mexico (43%) and South Africa (41%). 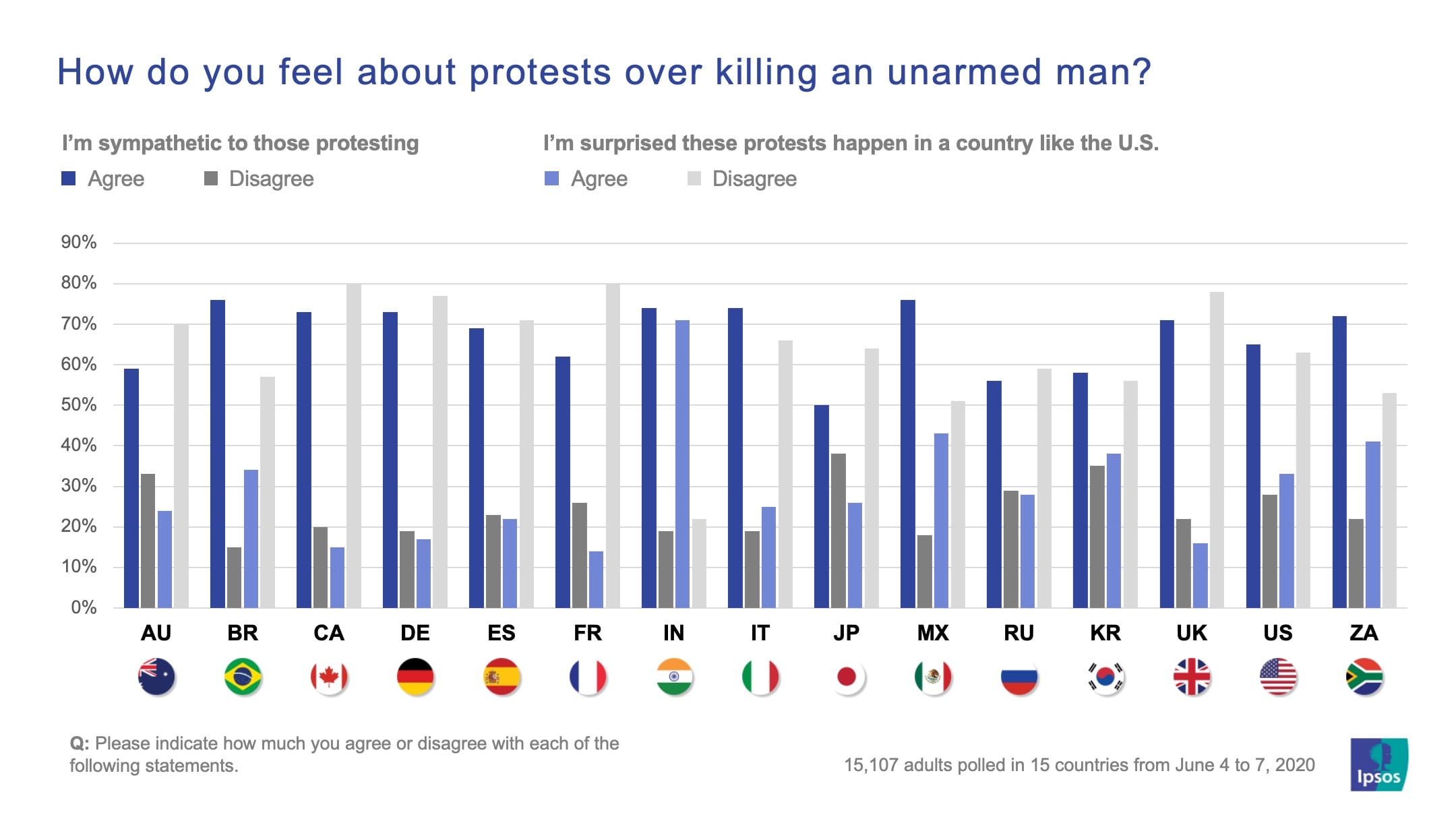 How people feel about Trump’s response

In terms of U.S. President Donald Trump’s response to the situation, a majority of people in 13 countries disapprove of how he has handled the recent protests and demonstrations. This sentiment is highest in developed countries of the U.K. (80%), Canada (76%), Spain (75%), Germany and Mexico (74%). In comparison, disapproval of the president’s actions among Americans is at 52%.

India is the only country where a majority of people (57%) approve of Trump’s response, followed by more than a third of people in the U.S. (38%). 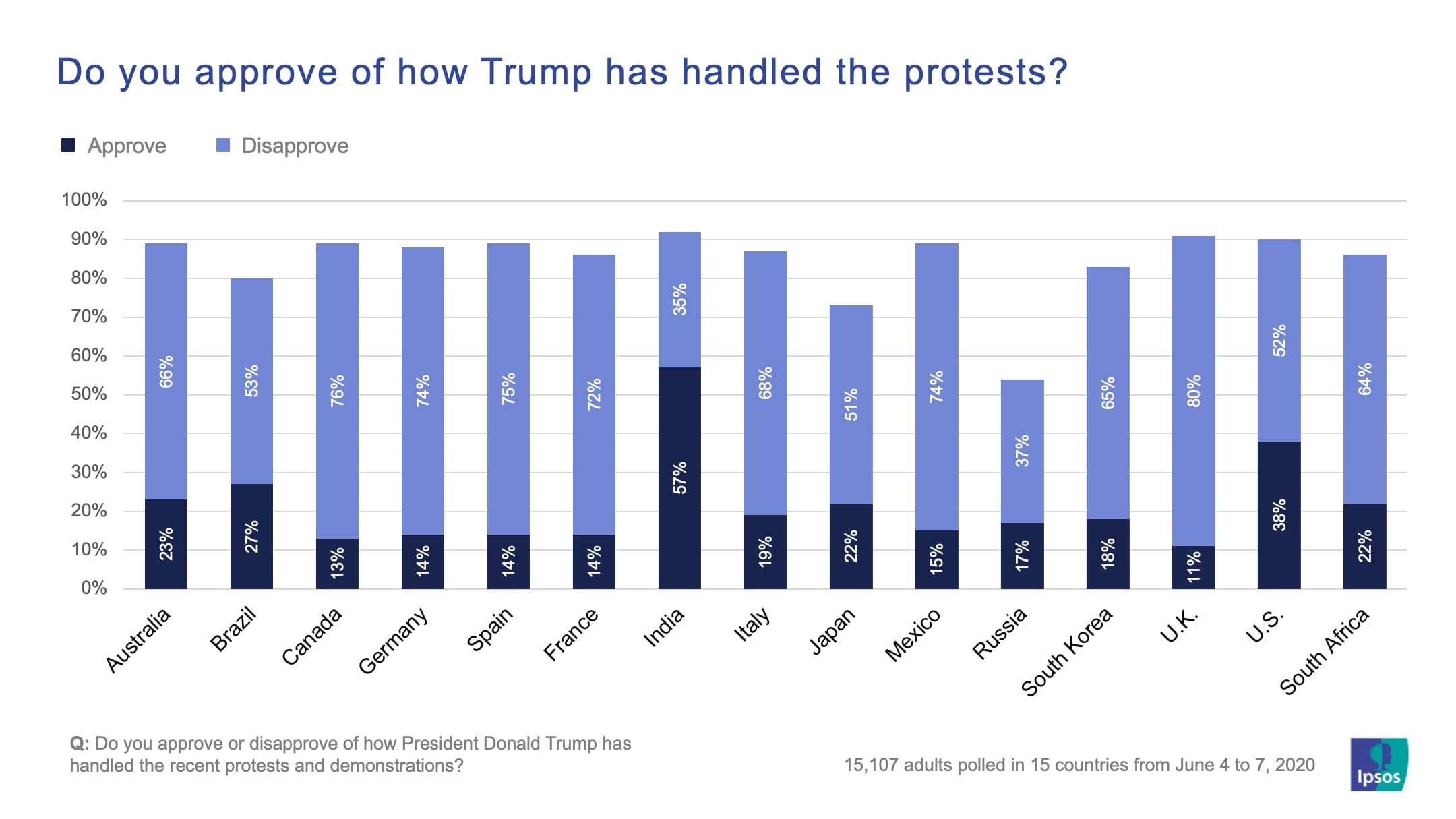 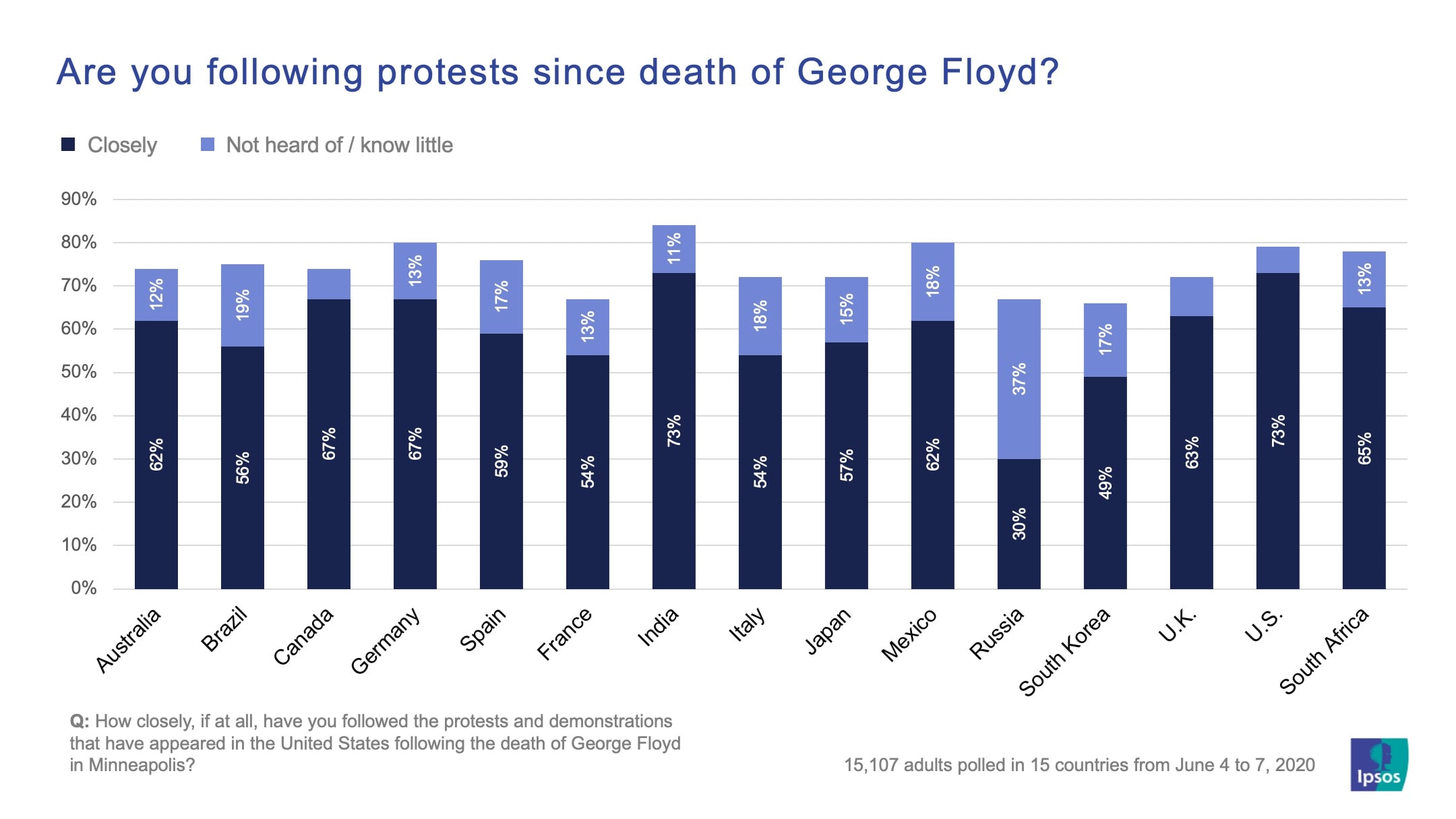 These are the results of an Ipsos survey conducted June 4th to 7th, 2020 on the Global Advisor online platform among 15,107 adults aged 18-74 in Canada and the United States and 16-74 in Australia, Brazil, France, Germany, Italy, Spain, India, Japan, Mexico, Russia, South Africa, South Korea and the United Kingdom. Where available, tracking results from previous studies conducted through March and April, as well as selected results from February, are referenced by date.