2021 is marked by overall more positive perceptions, and some top-10 NBI nations are benefiting from the movement, as the softening of Anholt-Ipsos Nation Brands IndexSM (NBI) scores across all countries witnessed in 2020 is reversed. Germany retains its top position in the 2021 Anholt-Ipsos Nation Brands IndexSM (NBI) for the fifth year in a row, but there have been some gains and losses among the top-10 rankings: 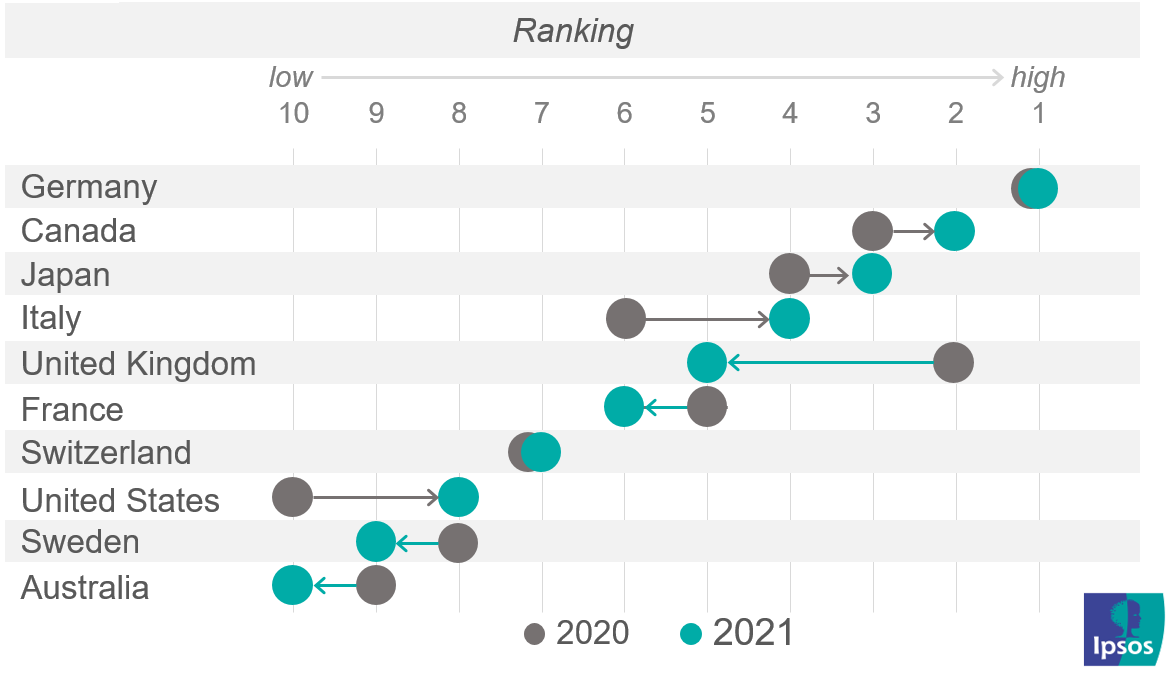 Germany ranks in first place out of 60 countries on the Nation Brands Index, for the seventh time overall and fifth year in a row. Germany is the highest ranked NBI nation in 2008, 2014, 2017, 2018, 2019, 2020, and 2021. With another first place ranking this year, Germany has now tied the United States’ record of seven years as the top NBI nation. Germany’s reputational strengths lie on the Exports, Immigration and Investment, Governance, and Culture categories. Global respondents feel particularly positive about buying German products, the appeal of investing in German businesses, the employability of German people, the German government’s work to fight poverty, and exceling in sports, placing Germany in the top-two in all five categories in 2021.

Canada’s top marks on governance, people, and immigration and investment

For the past couple of years, Canada has rounded out the top three, landing in third place. NBI 2021 is the first time that Canada has moved up to second place. First place rankings on the Governance, People, and Immigration and Investment indices, as well as relatively steady rankings on Exports, Tourism, and Culture contributed to Canada’s record ranking in 2021.

The United States had one of the most notable declines on overall NBI in 2020, dropping from sixth in 2019 to 10th. Its fall was triggered by sharp decreases on Governance, Tourism, and Immigration and Investment. A year later, despite the pandemic still being very much prevalent in the U.S., a wide political divide in society, and persistent vaccine hesitancy, the United States reputation has begun to rebound and improved on each of these categories.

Japan and Italy climb in ranking

Japan and Italy are two nations in the top 10 with noteworthy improvements on the overall NBI rank. Japan makes its debut in the top three for the first time since 2018 and has climbed from fourth in 2020 to third this year with positive perceptions on Exports, Tourism, Culture, and People. Italy advances from sixth to fourth place with strong opinions on its Culture, Tourism, and People.

All 60 NBI nations scores and rankings

For the first time in Nation Brands Index history, the full list of nations rankings and scores is published to provide sufficient context for potential movement with the addition of 10 new countries. The global sample size has expanded from 20,000 interviews per year to 60,000 interviews per year. Within each panel country, this corresponds to an increased sample from 1,000 interviews to 3,000 interviews. The number of measured nations has also expanded, with 60 nations being measured in 2021, up from 50 in previous years. Even with these improvements, we retained methodological consistency with previous years to allow for consistent trending capabilities, new opportunities for comparative assessments, and depth of analysis.

How did your country rank?

*2020 NBI Index Scores and Ranks reflect a correction to the scores released in the 2020 Anholt-Ipsos NBI press release.  2020 scores and ranks were erroneously calculated using 22 panel country results as opposed to 20 panel countries for consistency in tracking.  This correction results in minor score changes of less than 1 point, as well as select ranking adjustments.