The map comparing Italy in 2013 and today, shows the deep and, in our opinion, irreversible changes for the Country. Some commentators have labelled this ‘the 3 Italies’, but what we see is a new form of a bi-polar system. Centre-left powered by Lega and 5StarsMovement are the undisputed winners , while the Left taken as a whole has been ousted from the game. 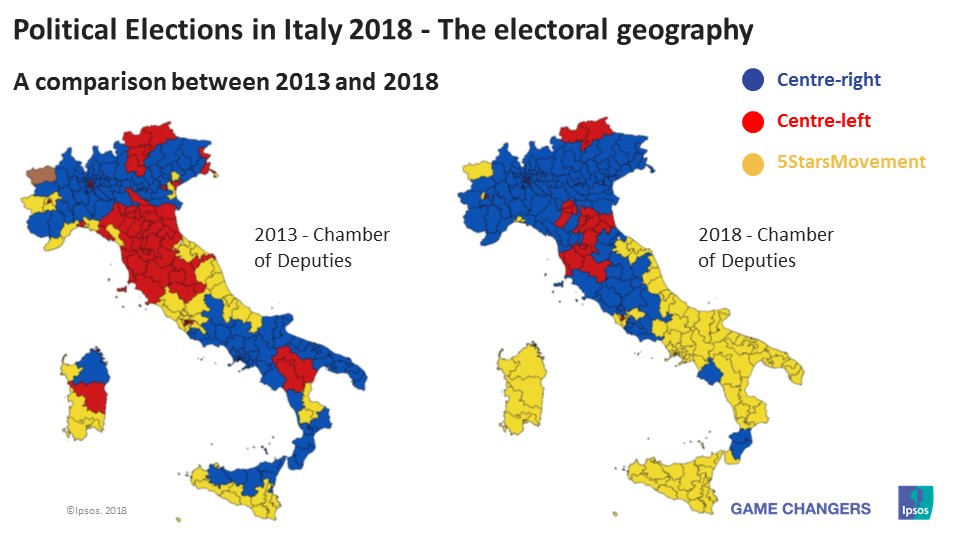 The analysis of the flows, show some interesting dynamics: first of all, the fact that more than one-fifth of the 2013 Centre-Left Coalition’s voters haven’t gone to the  polls this year. Our pre-electoral polls had clearly indicated this trend: many, among the PD former supporters were waiting for a message from the Secretary and the  executive committee, in the forms of  more participated decision making processes and the investiture of the Prime Minister, Gentiloni.  In the absence of such message, many have decided not to vote. Also, from this group, 14% have moved towards the 5StarsMovement and 7% towards LeU (Free and Equal). Therefore, less than half of the centre-left voters voted for PD, and just over one half confirm their voting choice.  A debacle, undoubtedly, which doesn’t find relief in the acquisition of formers voters of the Monti's 2013 coalition.

The Centre-Right comes out as a strongly united front: almost 90% of their past voters confirm their choice, although the news here is the transfer of votes from Forza Italia towards Lega. Very few the ‘betrayals’, essentially directed towards the 5StarsMovement (8%).
Lega is showing a strong attractive power, calling both those who didn’t go to vote in 2013, but also some electors from 5StarsMovement and from the Centre.

The same solidity features among the electors of 5Stars: more than 75% confirm their choice, and those who don’t either don’t vote (9%) or vote for Lega (6%). The power of attraction of 5StarsMovement goes far beyond their natural reach:  14% of voters come from Centre-Left, 13% from the Centre, more than 20% from smaller lists.

Among first-time voters 5StarsMovement prevails, then PD and Lega almost equally share the preferences. High level of no-show  (35%), which appears, once again, as a break away from PD. In previous research pieces we had noted that PD exerted a good level of appeal among young people, and especially among students. However, in the end, also this potential electors decided to stay at home.

A leaner PD sees its social base shrink, and appears to be able to resist mainly within the higher age cohorts and among pensioners.  The so-called ‘reflective middle class’ which used to be one of its pillars, is now abandoning PD. Part of it has moved towards the list headed by Emma Bonino  (former EU Parliament Member and former Italian Minister of Foreign Affairs), ‘Più Europa (More Europe)’ which has appealed essentially to students, higher education people, middle and higher classes. Più Europa is the choice for those who wanted to stay within the Centre-Left area without staying with PD. Anyway, this choice has not collected the entirety Dof the potential voters for the area.

Within Centre-Right, Lega appears to be the best performer in terms of voters diversity:  it gains among its traditional base self employed and blue collars , but also expands among the traditional Forza Italia electorate, the homemakers.

The 5StarsMovement obtains the best across-the-board performance ever:  difficult to find a group among which they appeal more than in others; a finer analysis can just highlight a relatively negative performance here and there: a bit less among the traditional PD supporters (older people, degree holders, pensioners). The only significant peak is to be seen among civil servants. In earlier times, this was the traditional basin for the Left, now they have finally moved away.

The analysis of social platforms activity  indicates that 3 forces have mobilized more than others: two among the winners, M5S and Lega, and the loser, PD.
Lega was powered by Salvini , the real driving force behind the consensus, while for 5StarsMovement the ‘brand’ is the winner, while the candidate(s) stayed behind the scenes. On the other hand, PD could count neither on a ‘Renzi effect’, nor on the strength of the ‘brand’.

These elections outcome offers a totally new world. The Italian Left is faced by the challenge of re-building a project and its social base, within a narrow route, shared among the left movements in many other European Countries. And this process will need time to succeed.
The 5StarsMovement will need to start a process of transformation to become an institution: this will be a challenge in that they will need to show their governing capabilities and, at the same time, to be able to maintain the consensus among their most ‘rebellious’ voters.
Lega will need to grow up its leadership abilities, to be able to consolidate the consensus which they have obtained in areas traditionally far from their original perimeter.

All this, of course, in the instance that a government is formed, even if only short lived.