A new UK study by King’s College London and Ipsos MORI finds that more people think the COVID-19 crisis has been handled badly than well in the UK, with political leaders receiving most of the blame.

Views of the response have also affected political and scientific trust, and while a majority think the UK is in decline, a bigger majority are optimistic that the pandemic can be a fresh start for the country.

The handling of the crisis 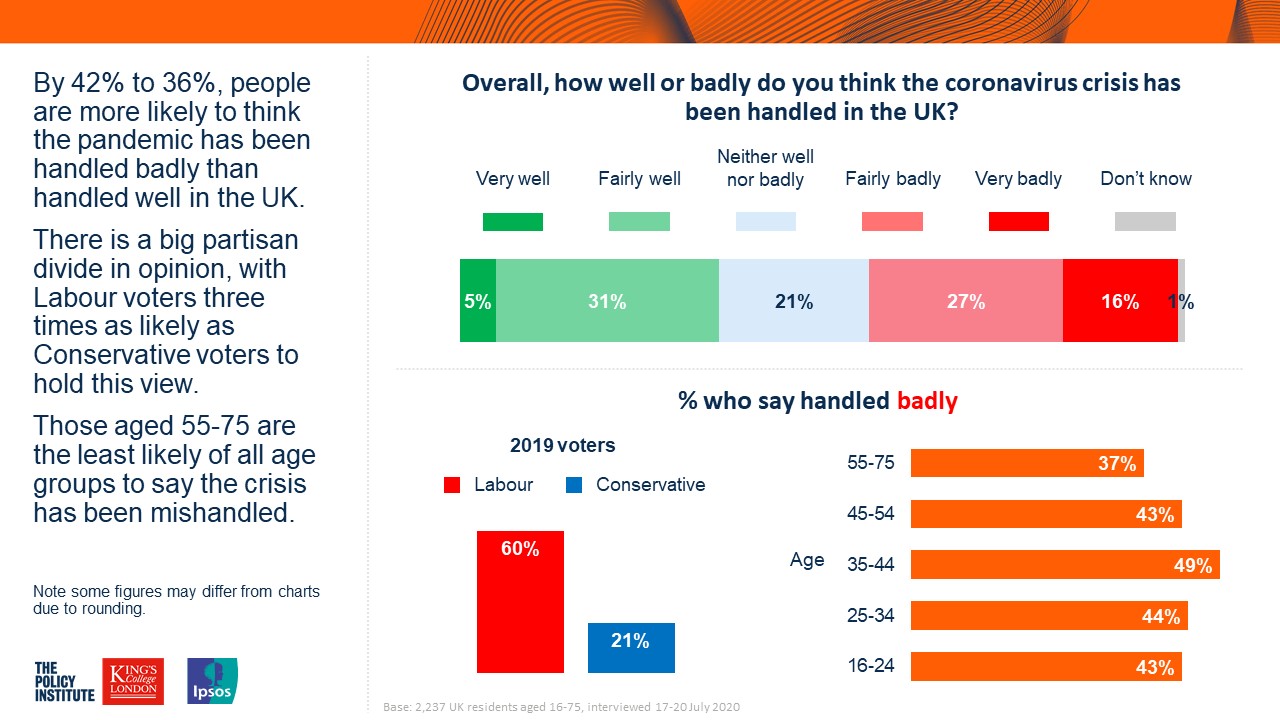 Who gets the blame?

The following groups are seen as among the three or four most responsible according to those who think the crisis has been handled badly:

Those who think the crisis has been handled badly are divided along party lines when it comes to who is most culpable:

Who gets the credit?

The following groups are seen as among the three or four most responsible according to those who think the crisis has been handled well:

Conservative voters who think the crisis has been handled well give more of the credit to the health service (74%), scientific advisers (53%) and rule-following members of the public (53%) than they do the government (43%), the Prime Minister (36%) or their party (18%).

How the crisis has affected political, economic and scientific trust

Despite the government’s response to COVID-19 not inspiring as much trust as scientists’ work, people appear to have grown less cynical about some aspects of politics:

The future of the UK

Views of the government’s response

The public have a more favourable view of the government’s economic response than they do of its approach to education during the pandemic:

Meanwhile, across a range of measures, views of the official response are virtually unchanged from the third week of May.

Views of other countries following their responses

More people think the coronavirus crisis has been handled badly than well in the UK – but there is not universal condemnation, with nearly four in 10 thinking it’s been handled at least fairly well. There are much clearer messages on who gets the blame and credit, however: the PM and the government are the focus of blame, while the NHS is most likely to get the credit. People see the UK public as a key reason it’s gone well – and a key reason it’s gone badly, showing how varied an image we have of how different people have followed the guidelines, or not.
There are more worrying signs for how the crisis has changed our view of the UK’s future, with over half of the public now thinking the UK is in decline, a significant increase since 2018.
But even with this concern about our trajectory, many also see the crisis as an opportunity: two-thirds of us think it provides a chance to build a better Britain. This is a crucial element of public opinion for the government to foster, in this period before the longer-term economic impacts start to be felt – encouraging a sense of confidence could be vital to how we do actually come back.
In contrast, our views of some other countries have tanked, particularly the US. Two in three people say they have a worse view of the US since the crisis began, which is a much more negative shift than seen in our view of China, and much more negative than our perceptions of the EU.”

It’s very much back to politics as usual when it comes to how Britons feel Covid-19 has been handled, with those who voted Labour in 2019 far likelier to say that the government or the Conservative party are at fault than those who voted Conservative in 2019. The ‘all in this together’ sentiment from the start of the crisis in March is well and truly over. What both sides of the partisan divide can agree on, though, is that the NHS has done best at handling COVID-19.
We also see that despite some concerns in the media about support for government measures falling, less than a third of people oppose the UK Government’s current approach to controlling coronavirus.

Ipsos MORI interviewed a sample of 2,237 adults aged 16-75 in the United Kingdom using its online i:omnibus between 17 and 20 July 2020. Data has been weighted to the known offline population proportions for age within gender, government office region, working status, social grade and education. All surveys are subject to a range of potential sources of error.