• Brexit remains the pre-eminent issue for the country, with 63% naming it as a concern

The January 2019 Issues Index confirms that Brexit remains the biggest issue facing Britain for a majority of the public. Sixty-three per cent name it as a worry – while this is a small drop from December (67%) it remains an historically high level of concern about this issue. Furthermore, the proportion naming Brexit and the EU as the single biggest issue for the country remains at the same level as December (54%).

The proportion who see the NHS as a big issue remains at the level recorded in December; 44% mention concerns related to the health service. 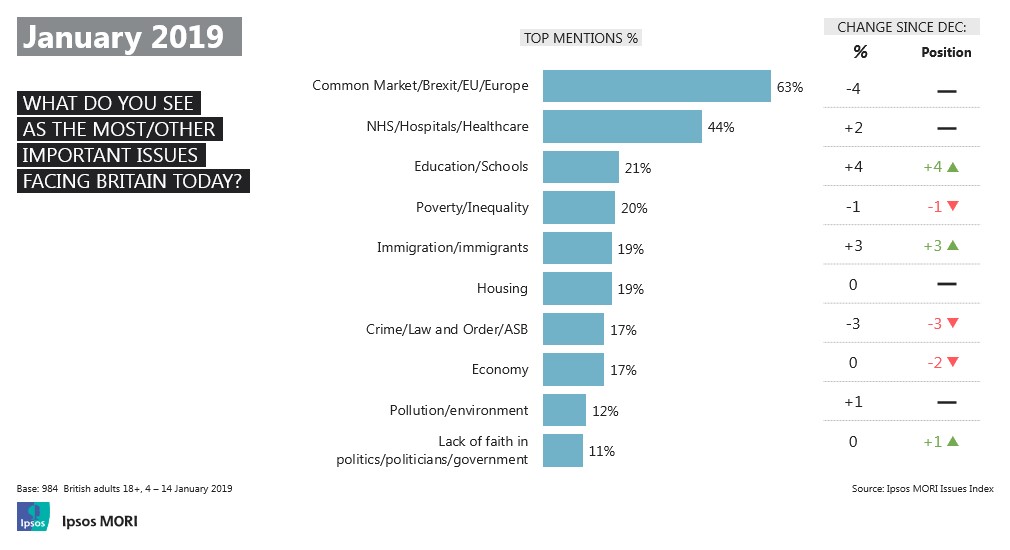 Concern about education and schools is strongly centred within some parts of the population. People from social grades AB are especially likely to mention it as a worry (36%), alongside public sector workers (33%), Labour party supporters (30%) and those living in rural parts of the country (31%).

Ipsos MORI's Issues Index is conducted monthly and provides an overview of the key issues concerning the country. Ipsos MORI interviewed a representative quota sample of 984 adults aged 18+ across Great Britain. The answers are spontaneous responses, and participants are not prompted with any answers.

Ipsos MORI's Capibus vehicle was used for this survey. Interviews were conducted face-to-face in-home between 4 and 14 January 2018 at 155 sampling points across Great Britain. Data are weighted to match the profile of the population.