Ahead of a major debate hosted by Ipsos MORI, King’s College London and the Media Standards Trust, new research reveals that the British public has an ambivalent attitude towards the impact of social media platforms such as Facebook and Twitter on political debate.

On the positive side, seven in ten Britons (71%) feel that social media platforms are giving a voice to people who would not normally take part in political debate. This is particularly the case for young people (88% of 18-34s, compared with 56% of those aged 55+). On balance, people also feel that social media platforms are breaking down the barriers between voters and politicians and political parties (by 50% to 28%). Again, young people are most positive (60% agree that social media are breaking down the barriers, compared to 39% of those aged 55+).

However, while social media may be broadening access, many Britons are worried that this is at the cost of the quality of political debate. Half (52%) say that social media platforms such as Facebook and Twitter are making political debate more divisive, while 50% also feel that they are making debate more superficial. And whilst users of social media are much more likely to be positive about the upsides of broadening access and breaking down barriers than non-users, they are also just as likely to recognise its disadvantages: 57% and 50% of social media users agree that it is making debate more divisive and superficial that it used to be. 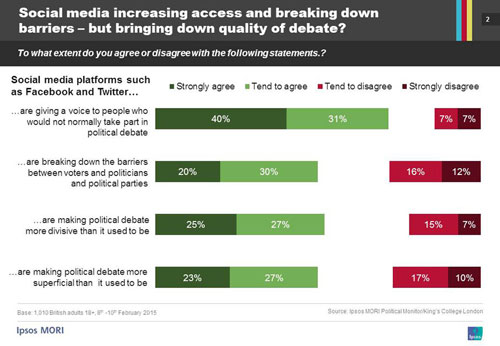 So while social media seems to be complementing and adding to traditional news media, it does not seem to be replacing it entirely. Only one in five Britons (19%) say they are more likely to trust political information they get from social media platforms than from newspapers, while 59% disagree. Even among social media users themselves, the proportions are similar, although 18-24 year olds are the most likely to trust social media more, at 32%.

Nevertheless, the potential importance of social media in this election for young people especially is confirmed by this research. When asked what might influence their vote in the upcoming elections, the putative TV debate between the leaders comes out top for Britons as a whole, mentioned by 40%, followed by newspapers at 20%. Something you read on social media is mentioned by 13%, just behind party election broadcasts (16%), and similar to political leaflets through the letterbox (12%). However, for 18-24 year olds social media has the potential to have much more impact. Among this group, 34% think something they read on social media will influence their vote, second only to the TV debates.

Spinning the Election: Who is setting the Agenda in the UK General Election 2015? from Ipsos MORI

“There have been claims for Britain’s first ‘social media election’ for some time now, but what this evidence suggests is that platforms such as Facebook and Twitter are becoming part of the natural fabric for the group both hardest to engage in politics and whose political opinions are least set in stone – young people. Modern users of social media are sophisticated enough to recognise its disadvantages – and don’t seem to be dropping other news sources entirely – but its potential to widen access to politics could be key in halting the decline in political engagement among younger generations.”

“It is heartening to learn that almost nine in ten young people think social media gives more of a voice in political debate to people otherwise left out. It's critical that questions of trust and superficiality don't erode this.”