In Ipsos MORI’s latest KnowledgePanel poll, two-thirds (67%) of home-schooling parents say learning at home went very or fairly well for their children over the latest lockdown, but 31% disagree.

Among the public as a whole, additional tutoring sessions and summer school sessions specifically for those who have fallen behind are seen as effective measures by 87% and 84% respectively, followed by increased wellbeing support (77%).  Parents themselves also believe these would be effective – especially additional tutoring (86%) and better support for children’s wellbeing (85%).

However, parents are less convinced than the public as a whole about the effectiveness of other measures.  Seven in ten (70%) among all British adults believe shorter summer holidays for all students would be effective, but this falls to six in ten among parents, and there is a similar gap when it comes to shorter half-term holidays (58% among all believe this would be effective., but only 48% among parents).  The same pattern applies to less favoured measures, such as repeating the current school year (46% of all adults think this would be effective, but 38% of parents), and longer school days for all students (43% vs 37%).

Given their experience of lockdown therefore, the most preferred options for more than half of British parents if their children needed to catch-up on any lost education are to receive increased wellbeing support (56%) and additional tutoring sessions outside of school hours (55%).  Although these two options are the top priorities for all groups, there are some differences of emphasis by income level.  Parents from lower income households place more well-being support as their number one choice, while for higher income parents it is additional tutoring. 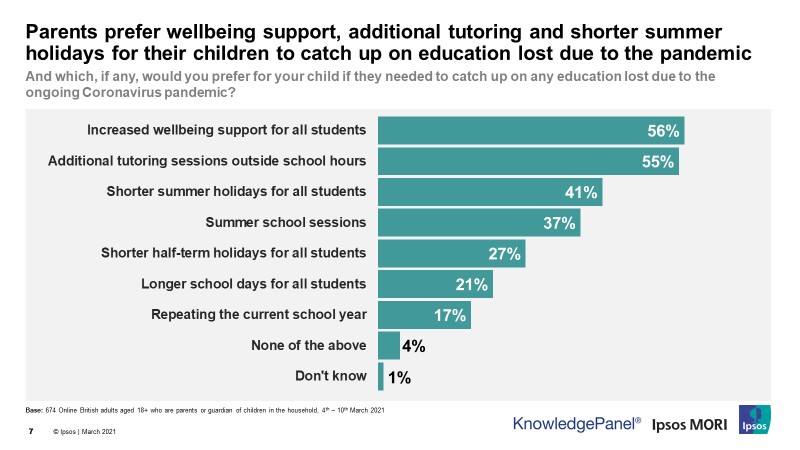 Two in five (41%) parents would prefer shorter school holidays for all students in order to catch up on any missed schooling while 37% would like their children to attend summer school sessions.

Around 1 in 5 would like to see the current school year repeated (17%) or have longer school days for all students (21%) in order to make up for time lost due to the coronavirus, and around 1 in 4 (27%) would prefer shorter half-term holidays (27%).

It's clear that while many parents have done their best with home-schooling during the latest lockdown, it’s been a challenge for a significant proportion, especially those living in more deprived areas.  It’s also clear that parents are thinking about their children’s mental and emotional well-being as well as the impact on their learning, with more support for well-being and extra tutoring tailored for those who are behind their top two priorities for catching up on what was lost during the pandemic.