New polling from Ipsos, done after Rishi Sunak and Sajid Javid announced their resignations, shows 7 in 10 (69%) Britons lack confidence in the UK Government’s ability to run the country with integrity while a similar proportion (64%) don’t believe it is running the country properly, competently or seriously. 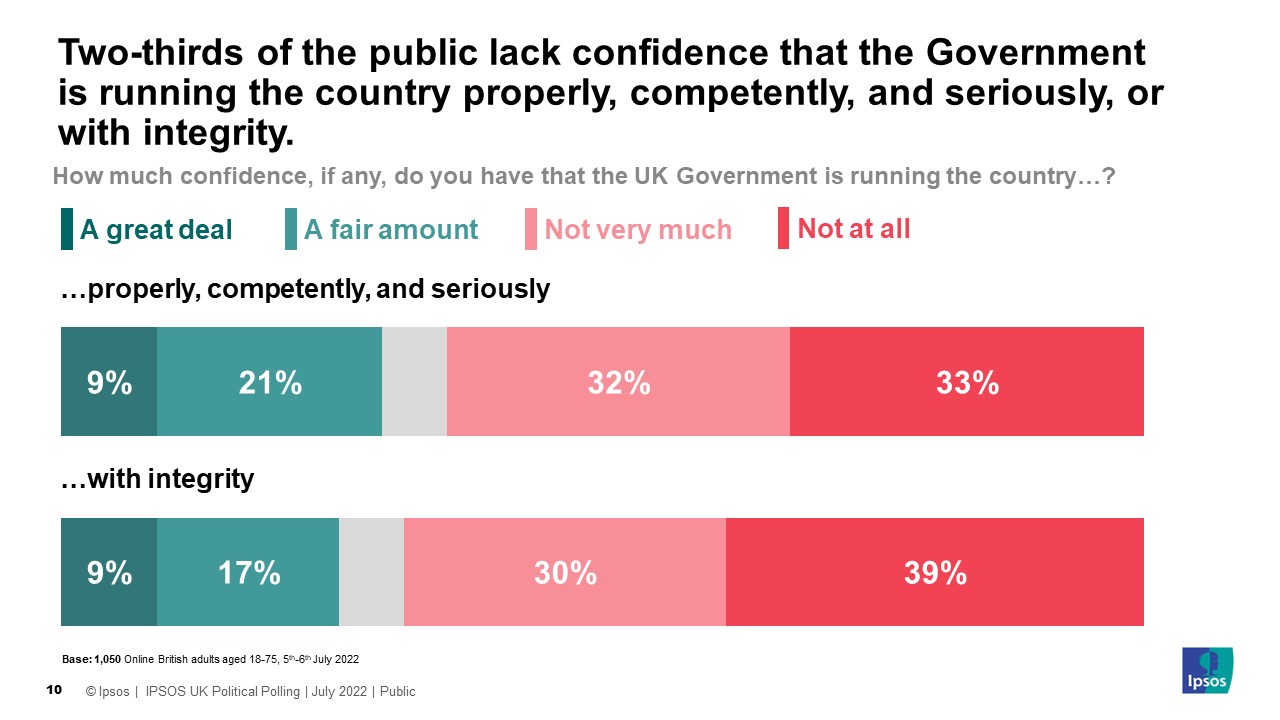 Even among their own 2019 Conservative voters, 62% lack confidence in the Government’s to lead with integrity.

Looking at the actions of the past couple of days, the majority of Britons believe Rishi Sunak and Sajid Javid were right to step down from their posts. Around 7 in 10 say the Chancellor of the Exchequer was right to resign (71%) while a similar proportion say the same for the Secretary of State for Health and Social Care (69%). Only 16% say either were wrong to step down.

Six in 10 (59%) Britons would now support Boris Johnson resigning as Prime Minister, up from 50% in June. Half (51%) of those who voted for the Conservatives in 2019 want Mr Johnson to resign, this increases to 71% of Labour voters. Among the public at large, only 22% would oppose Mr Johnson resigning from his position.  Similarly, when asked if they would support Boris Johnson appointing replacements and continuing as PM only 3 in 10 agree (the rest are split between neutral and oppose).

This reflects dissatisfaction with the way Boris Johnson is doing his job as Prime Minister, with only a quarter (26%) saying Boris Johnson has done a good job as Prime Minister while more than half think he is doing badly (56%, up from 49% in May). The public have just as negative a view of his Government with 59% saying it has done a bad job at running the country, up from 50% in June, while 22% think it has done well. Overall, 57% think the country is heading in the wrong direction.

Last night’s resignations reflect growing public dissatisfaction with the Prime Minister and the way his Government is running the country, with many Britons clearly sharing the doubts that his Government is conducting itself properly, competently and seriously, or with integrity.  Even many of his own 2019 voters are now becoming more critical.