New polling by Ipsos UK in partnership with the EU:UK Forum shows that the proportion of Britons who think the UK’s exit from the EU has made their daily life worse has risen from three in ten in June 2021 to 45% now. Seven in ten of those who voted Remain feel this is the case, up from half last year – and the proportion of Leave voters who say the same has doubled over the same period, from 10 to 22 per cent.

At the same time, the proportion of those who say that Brexit has made their daily lives better has also risen, although they remain a smaller group: seventeen per cent say this is true, up from one in ten in June 2021. Among Remain voters, one in ten now say Brexit has made daily life better (up from 5% in 2021) – while a quarter of Leave voters say the same, an increase from 17% a year ago.

The proportion who say it has made no difference has shrunk from half in 2021 to a third now. 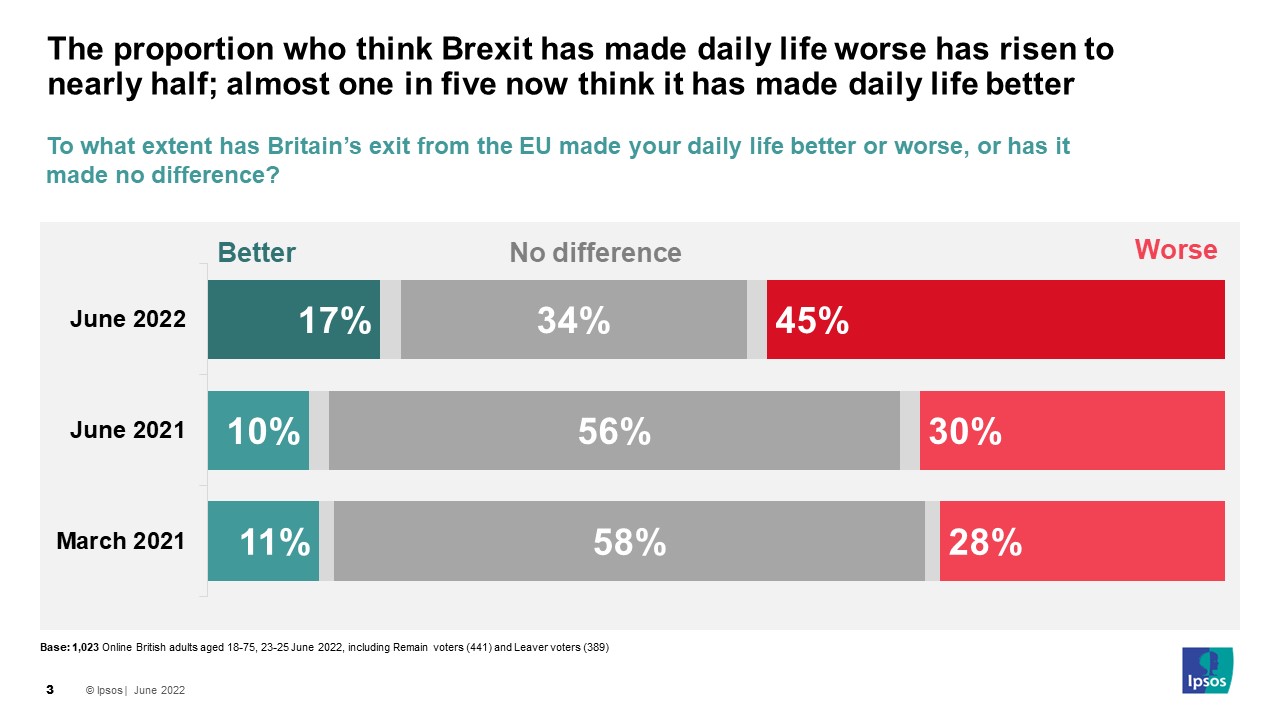 The poll also shows that Europe and the EU remains viewed as an important partner for the UK. Four in ten identify Europe as the most important relationship for Britain, ahead of the Commonwealth (23%) and United States (15%). Further, almost eight in ten say it is important for Britain to maintain a close relationship with the EU, including 72% of those who voted to leave the EU. Yet the public are less certain that the EU and UK will have a close relationship in reality: the proportion who think this is likely and those who think it is unlikely are evenly matched (45% each).

Yet the British public are split on whether the interests of the EU and UK are aligned. Just over a quarter of the public think that when it comes to their top priorities for the future relationship between Britain and the EU, the interests of the two are the same (28%), while one in five think they are at odds (20%). The largest proportion think there is a mix of interests that are partly at odds and partly the same (42%) – and this is true for both Remain and Leave voters (45% and 41% respectively).

Trade tops the list of public priorities for Britain’s relationship with the EU: 33% of the public list improving the trade agreement to make it easier to buy and sell goods and services as a top priority, followed by reducing illegal immigration into Britain and responding to the Russian invasion of Ukraine (both 22%). However, almost half (49%) of the public think it is unlikely that Britain and the EU will work together to achieve a satisfactory outcome on the priorities they think are most important, although 41% are more hopeful.

The public are especially negative on the level of agreement between the EU and UK on two issues: managing illegal immigration across the English Channel and managing border checks on goods travelling between Northern Ireland. On the former, just 22% think EU and UK interests are similar while 43% think they are at odds. For the latter, one quarter think interests are in sync and four in ten think they are misaligned. And despite it topping the list of public priorities, there is no clear consensus that EU and UK interests are close on increasing trade between the two – 32% think the interests of the two are broadly the same, but 26% think they are at odds – and another 34% a mix of the two.

However there is a far greater feeling of agreement on other big issues of the day. In particular, the public are likely to think the EU and UK share interests in preventing and detecting crime and terrorism (54%), dealing with Russia after its invasion of Ukraine (52%) and reducing carbon emissions to reach net zero targets (46%). 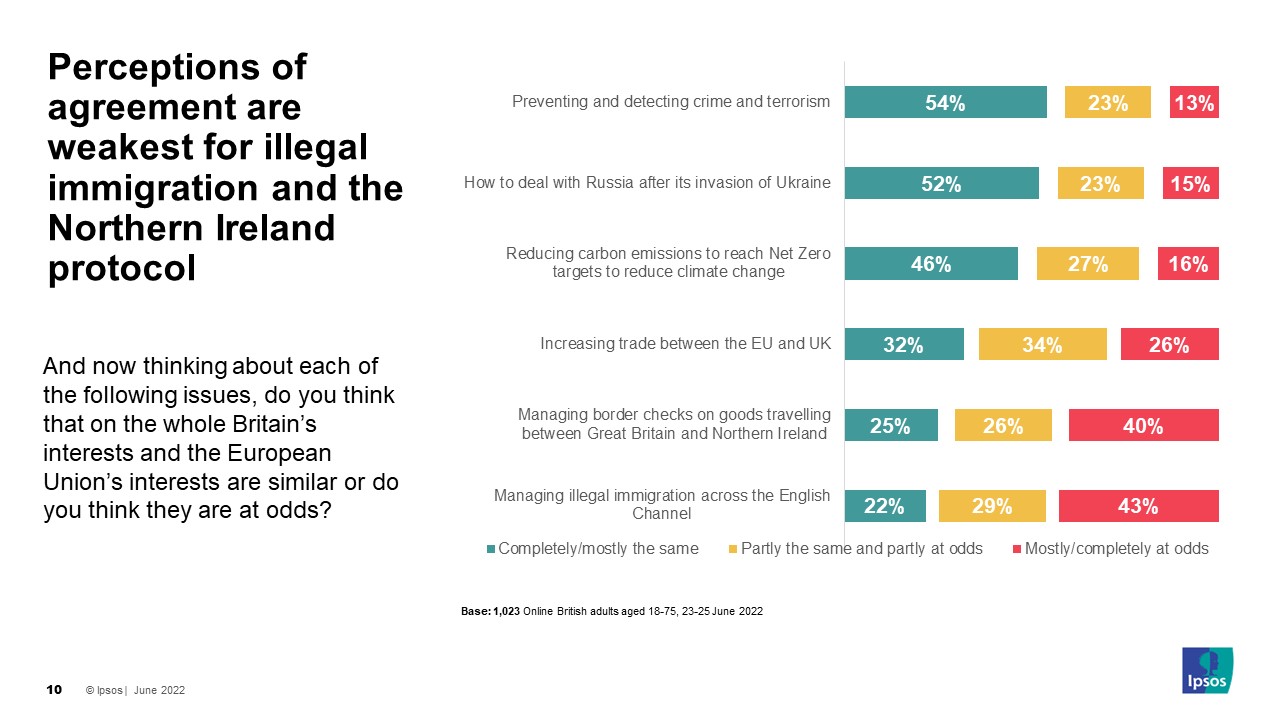 This polling highlights public uncertainty about the shape of the UK’s future relationship with Europe. However while they see potential flashpoints around the Northern Ireland border and illegal immigration they also see clear areas of agreement on supporting Ukraine, preventing crime and terrorism, and taking action to meet net zero pledges.
We have also seen a sharp increase in people thinking leaving the EU has had a negative effect on their daily lives. This echoes other polling and we may also be seeing an impact from broader concerns about the rising cost of living.