New research by Ipsos and the Policy Institute at King’s College London shows that the British public has become significantly more liberal on moral issues over the last 30 years. Society today is far more tolerant on issues including illegal drug use, homosexuality, abortion, depictions of violence and many aspects of sex in popular culture.

What were once pressing moral concerns have become simple facts of life for much of the public. In 1989, 40% of British adults believed that homosexual relationships were morally wrong, but today that number has fallen by two thirds to just 13%. Meanwhile, 64% now strongly agree that homosexuals should be treated ‘just like other people’, up from 23% (note – this statement was asked of an online sample of those aged 16-75 in 2019 and a face-to-face sample of all age groups in 1989 but the scale of change is such that it is unlikely to be a result of survey method).

Meanwhile, the proportion of the public who think abortion is immoral has halved in the last 30 years from 35% to 18%, while the number who describe the use of soft drugs like cannabis as immoral has also halved from 60% to 29%.

One of the big drivers of this shift in moral attitudes is more liberal older groups replacing the previous older cohort. Those aged 55 and above in the 1989 survey grew up in a more culturally conservative society before the Second World War than their equivalent ‘Baby Boomer’ group in the 2019 survey. This group was raised in the more permissive British society between 1944 and 1964 and today have more liberal attitudes reflecting this. For example, whilst those aged 55 and above are still the age group most likely to oppose homosexual relationships, disapproval has dramatically fallen from 54% to 18% amongst this age group and the gap in opinion between this cohort and other age categories has reduced by more than half. 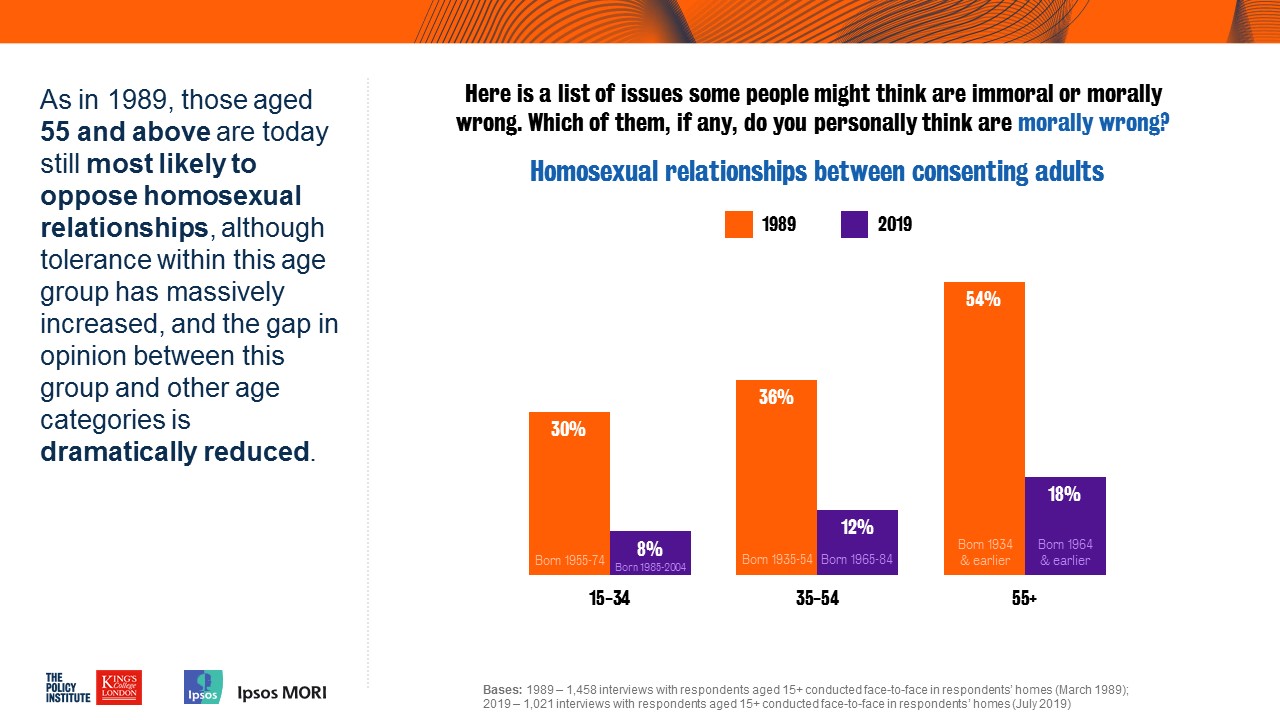 There are however significant differences in opinion between voters of the main political parties and by EU referendum vote. 76% of Remain voters strongly agree that homosexuals should be treated ‘just like other people’ compared to 51% of Leave voters, and there is a similar gap between Labour or Lib Dem supporters and supporters of the Conservative Party and Brexit Party.

Not all moral concerns are falling

Some moral concerns have also endured or even increased over time. Moral disapproval of capital punishment has increased since 1989, with a third or more in each age range now saying it is immoral. While attitudes to divorce and couples living together who are not married have continued to soften, a majority of Britons still consider having sexual relationships with someone who is married to someone else to be immoral with only a slight rise from 52% to 55% since 1989. Views on pornography in the cinema and on topless page 3 girls have also remained stable over time, with half and a fifth of the British public disapproving of these in both time periods respectively. 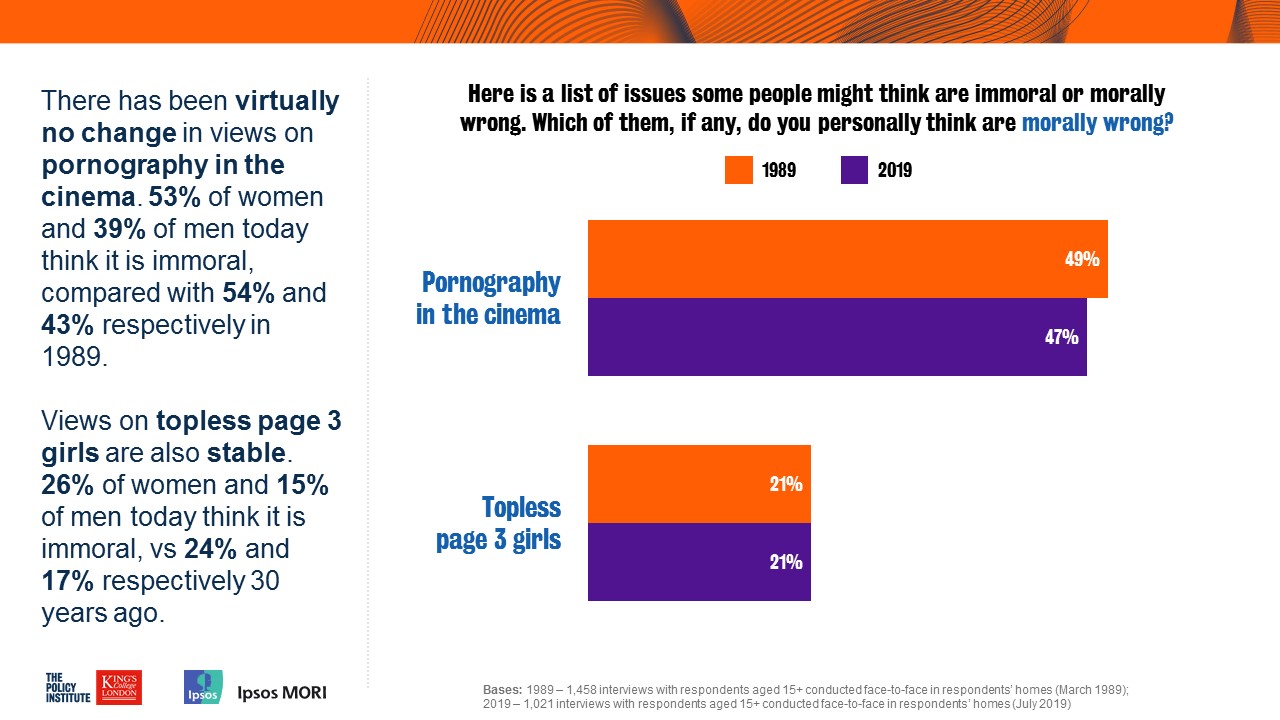 Finally, there is bad news for politicians in these findings. Half the population now disagree that they are good people, double the number 30 years ago. Here it should be noted that we are comparing an online survey in 2019 to a face-to-face survey in 1989 but the scale of change is such that it is unlikely to be a result of methodology.

These findings show Britain has become decisively more liberal on a range of moral issues in the last 30 years. That we’ve gone from being a country in which four in ten thought gay relationships were not just wrong but immoral, and in which only half thought gay people should be treated just like anyone else, to the society we see today, all in the space of a few decades, shows just how much attitudes can change.

On all sorts of issues, from full frontal male nudity and violence on TV, to drug use and abortion, we are much more relaxed as a nation.

One of the causes of this shift is that Baby Boomers – who grew up in more permissive times – have moved into older age, replacing a generation born before World War II, who had more conservative views.

The result is that what were once pressing moral concerns have become simple facts of life for much of the public. However, some moral concerns, such as having affairs, have endured across the decades, or have even increased, such as capital punishment.

This research shows the value in measuring long-term trends and demonstrates just how much public attitudes to questions of morality and other issues can change over time. What was once seen as the accepted conventional wisdom or social norm can change significantly in a matter of decades. It is worth asking ourselves, what are the accepted norms of today that may not be accepted by future generations?

1989 study: 1,458 interviews conducted face-to-face in respondents’ own homes across 251 sample points between 2 and 13 March 1989. Data are weighted to reflect the GB population profile.

2019 study on immoral behaviours: 1,021 interviews conducted face-to-face in respondents’ own homes between 27 June and 9 July 2019. Data are weighted to reflect the GB population profile.

2019 additional questions on “homosexuals should be treated just like other people” and “politicians are good people”: 1,124 interviews conducted online among respondents aged 16-75 between 31 May and 3 June 2019. Data are weighted to reflect the GB 16-75 population profile. Direct comparisons with the 1989 survey should therefore be treated with some caution, given the change in sample structure and mode of interview.