Andy Burnham leads the pack, but all Labour party leadership candidates yet to convince public and their own supporters they have what it takes to be a good Prime Minister.

With two months to go until the next leader of the Labour party is selected, Ipsos’s latest Political Monitor shows that the public are still to make up their mind about the contenders, and none have a net positive rating overall. Andy Burnham leads the pack with 27% agreeing he ‘has what it takes to be a good Prime Minister’, although equally another 27% take the opposite view. Yvette Cooper comes second with 22% thinking she has what it takes while one out of three (34%) do not. Jeremy Corbyn and Liz Kendall trail behind with 17% and 16% respectively saying they have what it takes to be a good PM. Three in 10 (30%) however don’t think Ms Kendall has what it takes while 36% are critical of Mr Corbyn. 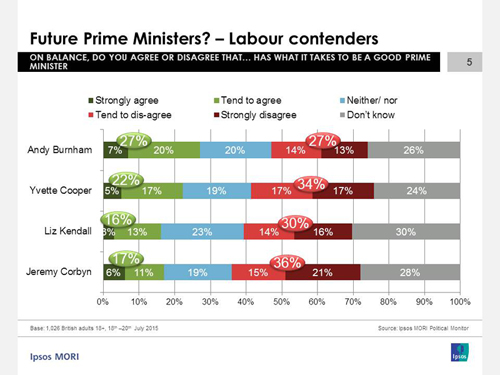 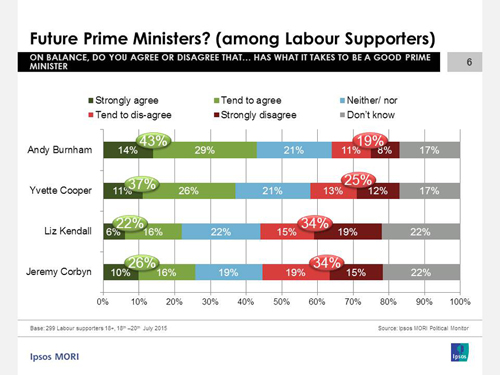 Meanwhile, two months into their new government, the Tories find themselves maintaining their lead over Labour as the opposition party moves to select their next leader. The Conservatives match their General Election result at 37% as Labour are on 31%. The Lib Dems stand at 10% immediately after electing their new leader, while UKIP are on 9% and the Greens on 8%.

“First impressions count, and this poll shows the next few months will be crucial for Labour’s leadership candidates to mould their image in the public’s mind, for better or for worse. For now, even though Andy Burnham has the advantage, none are starting from a high base.”

Ipsos interviewed a representative sample of 1,026 adults aged 18+ across Great Britain. Interviews were conducted by telephone 18-20 July 2015. Data are weighted to match the profile of the population. As an interim measure, and to preserve our long-term trends on voting intentions, our headline indicator is now changed to take into account past voting behaviour (do people always or usually vote in general elections, or say it depends) as well as stated likelihood to vote in an upcoming election (those who say they are at least 9 out of 10 certain to vote).