David Cameron is revealed as the most capable party leader in the eyes of the British public in the latest Ipsos Political Monitor. When asked about various attributes of each of the leaders more than half (53%) say the Prime Minister is a capable leader compared with 27% who say the same for Labour leader Jeremy Corbyn. Sixteen percent see Liberal Democrat leader Tim Farron as a capable and one in four (24%) say UKIP’s Nigel Farage is capable.

David Cameron also leads the field as being the most patriotic of the leaders with two in three (65%) associating this quality with him, just ahead of Nigel Farage (61%). Two in five (42%) say Jeremy Corbyn is patriotic while one in four (26%) say the same for Tim Farron.

David Cameron is well ahead of the Labour leader in other areas such as on being good in a crisis (48% compared with 19%), having a clear vision for Britain (52% compared with 39%), and having a lot of personality (41% compared with 28%) although Nigel Farage leads all four leaders on the latter quality (mentioned by 57%). Jeremy Corbyn however leads the Prime Minister on being more honest than most politicians (47% compared with 23%). 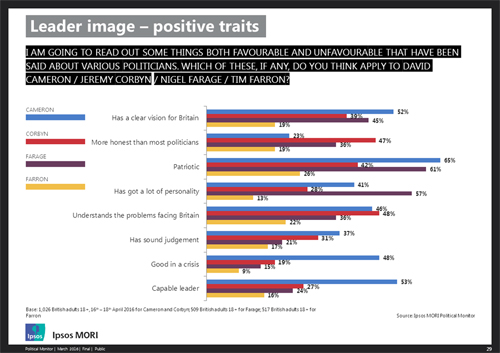 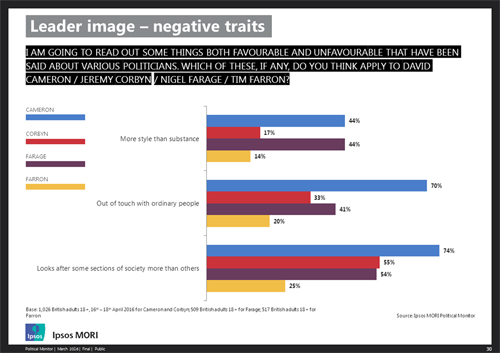 When it comes to leadership satisfaction from their own parties David Cameron and Jeremy Corbyn have similar ratings. Seven in ten (71%) of Conservative supporters are satisfied with David Cameron doing his job and one in four (24%) are dissatisfied. This compares to two in three (66%) Labour supporters satisfied with Jeremy Corbyn and one in four (24%) dissatisfied.

“David Cameron remains well ahead on some of the key attributes voters tell us they want to see in a Prime Minister, such as being capable and good in a crisis, despite rising numbers of people thinking he is out of touch and Jeremy Corbyn’s ratings as the most honest of the party leaders.”

Ipsos interviewed a representative sample of 1,026 adults aged 18+ across Great Britain. Interviews were conducted by telephone 16-18 April 2016. Data are weighted to match the profile of the population.