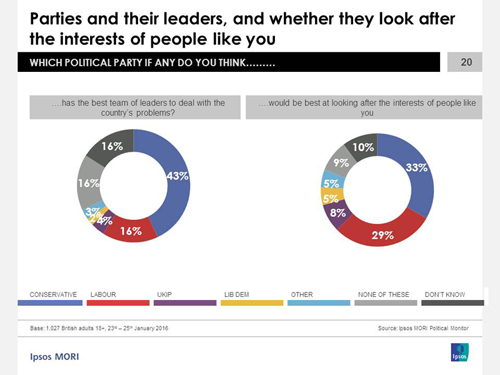 When it comes to being clear and united about their policies, one in three (33%, up 6 since June 2014) believe this best reflects the Conservative party compared to 13% who say Labour (down 4, and just two points higher than UKIP on 11%). Again this is the biggest Conservative lead since the question series started in 1991. When considering who has the best policies for the country as a whole the Conservatives also come on top mentioned by 35% (up 6 since April 2014), versus one in four (25%, down 2) saying Labour have the best policies. When asked who would be best at looking after the interests of people like you, one in three (33%, up 4 since April 2014) claim the Conservatives, leading Labour by four points (29% saying the party would best look after their interests, down 2). 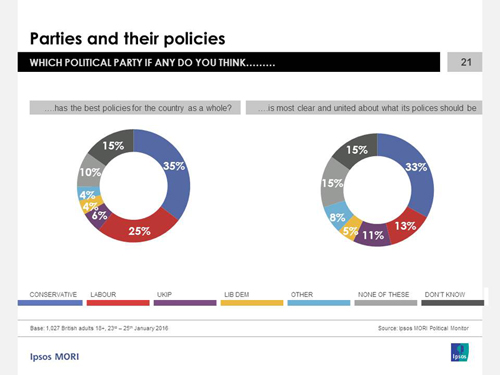 The past week saw much debate surrounding the future of Britain’s Trident nuclear submarines. The new poll reveals that the British public are just as opposed to unilateral nuclear disarmament now as they were in the 1980s. When asked if Britain should get rid of all its nuclear weapons, even if other countries keep theirs, seven in ten (70%) oppose the plan compared to one in four (24%) who support it. These are identical to figures seen in 1987, when the divide between those opposing disarmament and those supporting it also stood at 70% and 24%, and are also very similar to what our results in 1983. Labour voters are twice as likely to support the idea than Conservative voters (34% vs. 15% supporting the policy respectively), but even so a majority are against the idea. When unilateralism is not mentioned, support for disarmament among the public rises to 34%, but a majority (58%) are still opposed. 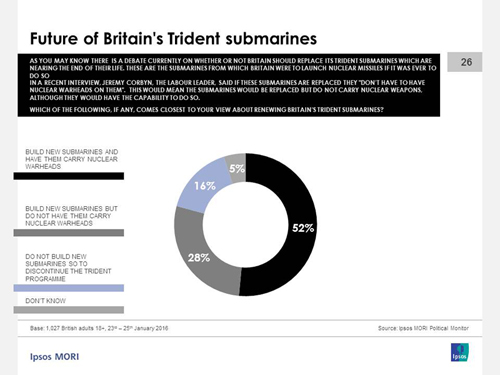 However other of Jeremy Corbyn’s policies prove more popular. Two in three (66%, 46% strongly) support his idea that companies should be banned from paying their shareholders dividends unless their staff earn the living wage (17% oppose it). While Labour supports are overwhelmingly in favour of the policy idea (75%), it even shows popularity amongst Conservatives with three in five (59%) supporting it. The overall figure however slightly drops to three in five (60%) when the question wording attributes the policy to Jeremy Corbyn – mainly among non-Labour supporters where support falls from 63% to 50%.

Ongoing vote intention figures still show the Conservative party with a lead over Labour. The Conservatives currently stand at 40% compared to Labour with 31%, UKIP at 11% and the Liberal Democrats at 7%.

“Labour starts 2016 with big challenges ahead, being the furthest behind the Conservatives on perceptions of unity and leadership team since we started asking the question. The last time one of the big two was this far behind was in May 2001, when William Hague’s Conservatives were trailing Tony Blair’s New Labour. Meanwhile, the British public are as opposed to unilateral disarmament today as they were when we were asking them 30 years ago.”

Ipsos interviewed a representative sample of 1,027 adults aged 18+ across Great Britain. Interviews were conducted by telephone 23-25 January 2016. Data are weighted to match the profile of the population.