The February Ipsos Political Monitor records the public’s economic optimism at its highest since May 1997 when Tony Blair and New Labour had just moved into Downing Street. Half (50%) of Britons believe the state of the economy will improve in the next year. One in four (24%) think the economy will get worse, giving an Economic Optimism Index score (% satisfied minus % dissatisfied) of +26, the highest since 1997.

This optimism appears to have fed into David Cameron’s ratings on the economy and unemployment. Four in ten (42%) now trust Mr Cameron more than the other party leaders to deal with managing the economy, compared to 20% trusting Mr Miliband, 5% Mr Clegg and 3% Mr Farage. This increases his lead over Mr Miliband to 22 points from 14 points in May last year.

Interestingly, associating the suggested tax levels with those who propose them (Ed Balls, George Osborne and Boris Johnson) makes no difference to the support for that rate of tax. 40% support Ed Balls’ policy of 50p in the pound, 28% support George Osborne’s policy of 45p and 26% support Boris Johnson’s policy of 40p. This may reflect that these policies are already closely associated with each party. (The question was asked as a split sample with half of respondents given just the 50p, 45p and 40p options, while the other half of respondents were told whose policy it is).

On the issue of immigration – now joint top in the Ipsos Issues Index - Mr Cameron is more trusted than the other leaders – but only slightly more, and more people are now saying “none of them” than last year. 23% trust Mr Cameron most to deal with immigration (down from 28% in May 2013), 20% trust Nigel Farage (down from 25%), 19% Mr Miliband and 8% Mr Clegg (both up 2 points). The increase for those saying “none” is 5 points to 18%.

After a number of weeks of negative stories about Liberal Democrat and UKIP politicians this poll finds that Nick Clegg and Nigel Farage are less trusted than David Cameron and Ed Miliband to look after the interests of women and handle disagreements within their party. Just 12% trust Nick Clegg the most to look after the interests of women and 3% trust Nigel Farage the most. Ed Miliband is seen as the most trustworthy on this issue with 28% and 21% chose David Cameron. Women are much more likely to say none of the above (21% compared to 9% of men).

Mr Cameron is the most trusted to handle disagreements within his party (29%), followed by 22% for Mr Miliband; but just 7% and 8% trust Messrs Clegg and Farage respectively, to sort out internal party disagreements.

The public’s voting intentions are little changed from January, with Labour holding a seven point lead over the Conservatives among those people who say they are certain to vote. 38% say they would vote for Labour, 31% for the Conservatives, 12% for the Liberal Democrats, UKIP (10%). 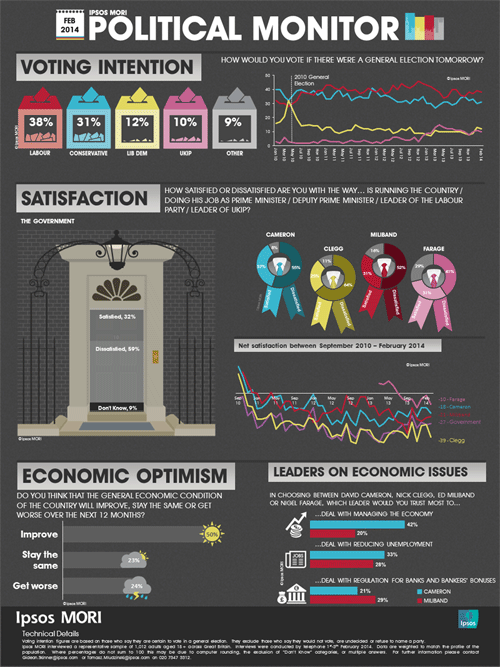 “Yet another surge in economic optimism to near-record levels has given David Cameron a personal boost for his stewardship of the economy, while after a difficult month for Nick Clegg his personal ratings have fallen (as have Nigel Farage’s).  And yet despite that, the party shares – and Labour’s lead – have remained steady.  How these different trends play out together - especially as other issues come to the fore - is going to be key as we get closer to an election.”

Ipsos interviewed a representative sample of 1,012 adults aged 18+ across Great Britain. Interviews were conducted by telephone 1st – 3rd February 2014. Data are weighted to match the profile of the population.