The Economist/ Ipsos March 2016 Issues Index – concern about the EU continues to rise, and the lowest level of concern about crime for 25 years

The March 2016 Economist/Ipsos Issues Index shows the prominence of the European Union as an issue facing Britain continuing to increase, with one quarter (23%) of the public now mentioning it as one of the most important issues facing Britain, compared to one fifth (20%) in February. Those most likely to mention the EU as an important issue are those living in south-east England excluding London (37%) and those who voted Conservative at the last election (42%), compared to those living in the Midlands (20%) and Labour voters (16%).

Despite this increase, the European Union remains the fourth-most mentioned issue facing Britain, behind immigration (46%), the NHS (34%) and the economy (25%). Fieldwork was conducted mostly before the attacks in Brussels on 22nd March. 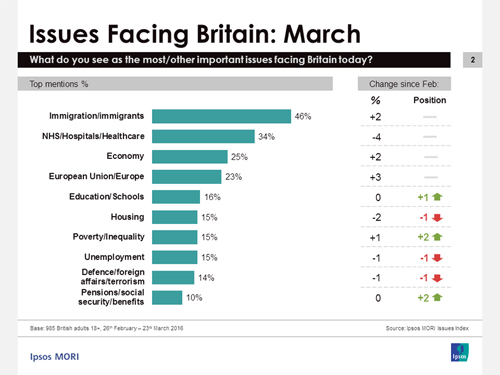 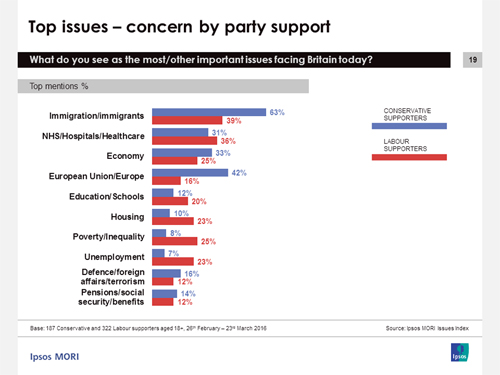 Ipsos's Issues Index is conducted monthly and provides an overview of the key issues concerning the country. Ipsos interviewed a representative quota sample of 985 adults aged 18+ across Great Britain. The questions are spontaneous - i.e. respondents are not prompted with any answers.  Ipsos's Capibus vehicle was used for this survey. Interviews were conducted face-to-face in-home between 26th February and 23rd March in 164 sampling points across Great Britain. Data are weighted to match the profile of the population.