The February Economist/Ipsos issues index shows that, after January’s dead heat between the economy and race/immigration concern about the latter has fallen by 7 percentage points to 34%, meaning that the economy is once again uncontested as the most important issue facing Britain today. 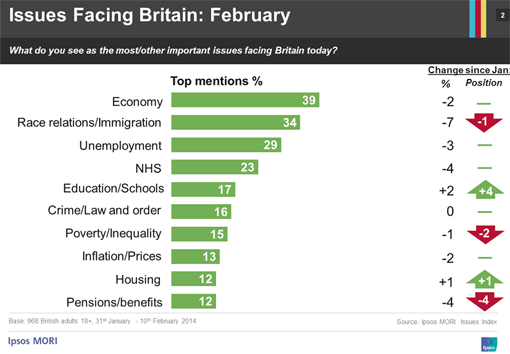 Two fifths (39%) mention the economy, though this score, matching that recorded in December last year, is the lowest since the start of the financial crisis. Concern is much lower amongst C2DEs (31%) and Londoners (27%), but much higher amongst those in the surrounding South East (55%) and ABC1s (46%), a pattern we saw consistently across 2013.

Three in ten (29%) are concerned about unemployment, with a quarter (23%) concerned about the NHS. This is the fourteenth consecutive month that there have been the same top four issues facing Britain.

One in six (17%) are concerned about education/schools, rising to a quarter (24%) of those in the north of England and Scotland, and a similar percentage (26%) of ABs.

Though it does not feature in the top 10 most important issues, following the wettest two months ever recorded for the south of England, one in ten (10%) are now concerned about pollution/environment, the highest level of concern in six years. Perhaps predictably, concern is highest in the South of England excluding London (17%). 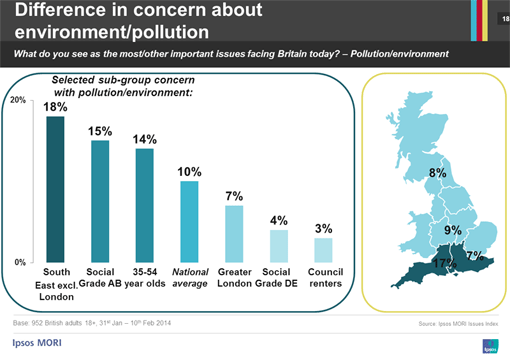 Ipsos's Issues Index is conducted monthly and provides an overview of the key issues concerning the country. Ipsos interviewed a representative quota sample of 968 adults aged 18+ across Great Britain. The questions are spontaneous - i.e. respondents are not prompted with any answers.  Ipsos's Capibus vehicle was used for this survey. Interviews were conducted face-to-face in-home between 31st Jan - 10th Feb in 172 sampling points across Great Britain. Data are weighted to match the profile of the population.