Constitutional affairs/Scottish independence rises to its highest ever score, though does not feature in the top ten list of concerns this month

This month marks the fortieth anniversary of our Issues Index, which was first asked in September 1974. This September Economist/Ipsos Issues Index shows a large increase in concern about defence/foreign affairs – approaching a quarter (23%) are concerned about this issue, the highest since November 2009, in the wake of the publicised murders of western hostages in the Middle East. This is an increase of nine percentage points since August, and this issue is now the fourth most important issue facing Britain.  Those who are more concerned with this issue include Conservative voters - approaching half (48%) are concerned, along with a third (32%) of those aged 55+. 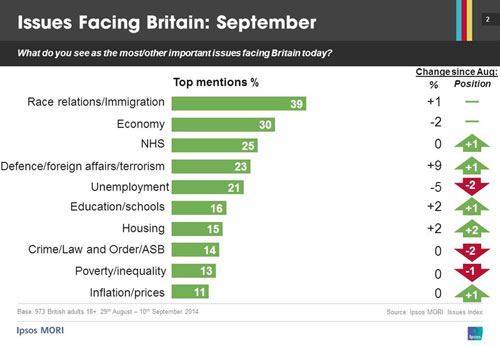 This coincides with a fall in those concerned about unemployment, a fifth (21%) mention this issue, a fall of five percentage points since August, and the lowest percentage to do so in over four year, as recent figures show the biggest drop in unemployment in 25 years.

Nevertheless race/immigration is still seen as the most important issue facing Britain today, mentioned by two fifths (39%).* This is followed by the economy, mentioned by three in ten (30%), though concern about this issue is continuing to fall, and this is the lowest level of concern since June 2008.

Elsewhere, just 7% are concerned about constitutional affairs/devolution/independence. This is just a three percent increase from last month, but it is still the highest we have ever recorded. It does rise to a third (32%) of Scots, though 36% of them cite the Economy as the key issue facing Britain. 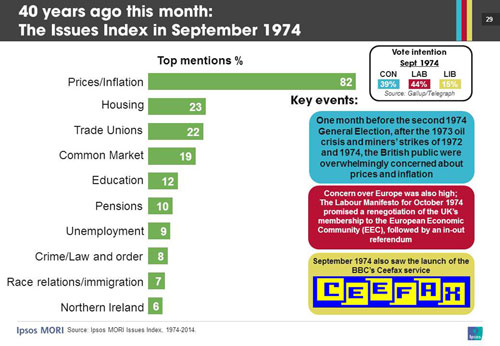 Ipsos's Issues Index is conducted monthly and provides an overview of the key issues concerning the country. Ipsos interviewed a representative quota sample of 973 adults aged 18+ across Great Britain. The questions are spontaneous - i.e. respondents are not prompted with any answers.  Ipsos's Capibus vehicle was used for this survey. Interviews were conducted face-to-face in-home between 29th August - 10th September in 185 sampling points across Great Britain. Data are weighted to match the profile of the population.