Half of Britons feel no benefit of economic growth

Conservatives most trusted on growing economy, Labour on reducing cost of living but neck-and-neck on ensuring people benefit from growth

The latest Ipsos Political Monitor shows that half of Britons feel the recent economic upturn has had no impact on their standard of living (48%). Just one in seven (14%) say it has had a great deal/fair amount of impact.

Expectations for their personal finances remain pessimistic, with fewer thinking their financial circumstances will get better (23%) than get worse (33%) over the next year. Four in ten (42%) believe their circumstances will stay the same over the next year. This is though an improvement on March 2011 when 48% expected their personal finances to get worse.

Further, three in four (77%) do not expect economic growth to have much impact on their standard of living over the next year; one in five believe it will impact them a fair amount/great deal (19%). This is in contrast with steady positivity regarding the economy at a national level, with our Economic Optimism Index remaining at +15, the same as last month with four in ten (42%) expecting the economy to improve in the next year and 27% expecting it to get worse.

The majority of Britons are concerned about the impact of government cuts over the next year, with six in ten (58%) very/fairly concerned. Four in ten (41%) are not very/not at all concerned. However, this is a fall in concern since February 2011 when it stood at 73% and two-thirds (66%) do not feel they have been affected by the cuts so far, with a third (32%) saying they have been affected a great deal/fair amount (little changed from February 2011).

The importance of the issue of household bills (such as fuel, energy bills and mortgages) on the cost of living agenda is underlined as two-thirds would prefer the government to take action to reduce household bills rather than reduce income tax (66% to 28%) to improve people’s financial situation.

Labour have re-established their lead over the Conservatives in terms of voting intentions, having been level in October.  Labour now hold a 6 point lead, on 38% to the Conservatives’ 32%; these shares are in line with the two parties’ average for 2013. UKIP, meanwhile, are now on their lowest level this year on 8%, tied with the Lib Dems (8%). The Green Party are now just one point behind these two on 7%. 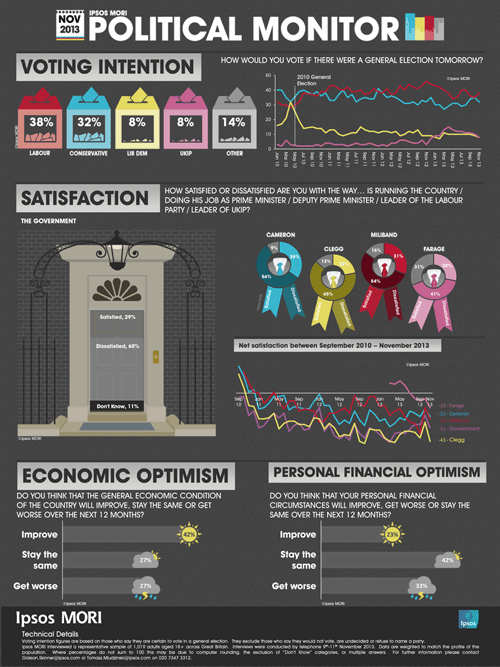 Satisfaction with all major party leaders has fallen after a post-conference boost last month:

“The feelgood factor still lags behind the official recovery, as this survey also shows the contested ground between the two main parties. The Conservatives’ natural territory is on growing the economy, Labour’s is on reducing the cost of living, but the two are neck-and-neck on being trusted to ensure people benefit from a growing economy.”

Ipsos interviewed a representative sample of 1,019 adults aged 18+ across Great Britain. Interviews were conducted by telephone 9th – 11th November 2013. Data are weighted to match the profile of the population.