One year on from the election of a Conservative majority in Westminster, Ipsos’s Political Monitor finds a fall in the public’s ratings on the government’s management of the economy. Just under half (47%) say the government has done a bad job over the past year compared with 42% who say they have done a good job. In March 2015, 56% said the Coalition government was doing a good job, and 37% were critical. Women, young people, the working classes and those in the public sector are more negative, while men, older people, the middle classes and private sector workers are more positive. 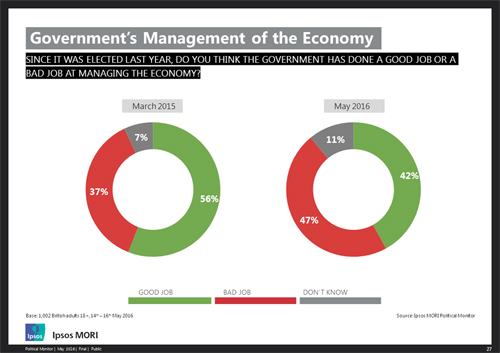 These figures come as the public’s optimism for the future of the economy declines from last month to its lowest since March 2013. Eighteen percent say they believe the economy will improve over the next twelve months compared with a quarter (25%) in April. Thirty-eight percent think that it will get worse compared with one in three (33%) last month, leaving an overall economic optimism index score of -20 (down 12 points).

Despite the falling ratings for the government’s management of the economy, the public still do not believe the Labour party or its leader Jeremy Corbyn are ready for government. Sixty-three percent disagree that Labour is ready to form the next government, compared with 27% who agree. This is slightly worse than Labour received in Ed Miliband’s first year in May 2011, when 31% believed Labour was ready for government and 57% disagreed. Three in five (60%) Labour voters however do feel that the party is ready to lead, while one in three (32%) disagree. Nor does Jeremy Corbyn fare well with the public when asked if he is ready to be Prime Minister. Two in three (65%) disagree that he is ready compared with 22% who agree (Labour supporters are also split, with 46% feeling he is ready against 43% who do not). These figures are slightly better than those of Ed Miliband in May 2011 when seven in ten (69%) disagreed that he was ready to be Prime Minister and 17% agreed. 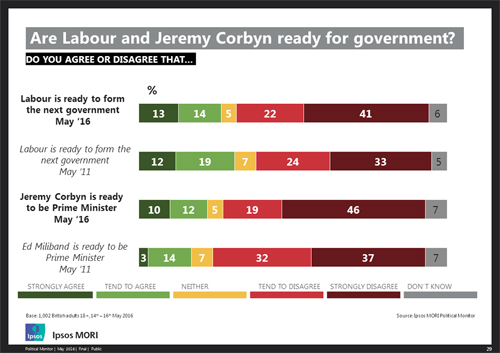 Ipsos Political Monitor: May 2016 from Ipsos

“The Conservatives have lost ground on some of the pillars of their 2015 success – the economy and David Cameron’s personal ratings, but Labour show little sign of improving the weaknesses that election exposed in their image, especially among older voters.”

Technical note Ipsos interviewed a representative sample of 1,002 adults aged 18+ across Great Britain. Interviews were conducted by telephone 14th – 16th May 2016. This month we have also updated our weighting profile to the latest ONS and LFS population estimates. We have tested this weighting and have found the new weights make minimal difference to the overall results