The latest polling from Ipsos’s Political Monitor reveals the majority of Britons think a hung parliament is bad for the country, both in regard to the 2010 result and looking forward to 2015. But despite this opposition to coalitions, half expect to see another coalition in 2015; 51% believe it is very/fairly likely, with 45% saying it is very/fairly unlikely.

This comes as Labour hold a nine point lead over the Conservatives. 39% of those certain to vote say they would support Labour, leading the Conservatives on 30%, with the Liberal Democrats on 13% and UKIP on 11%.

Satisfaction has remained steady for all the main party leaders:

Economic optimism is holding steady, with 45% believing the economy will improve over the next year and 26% believing it will get worse, giving an Ipsos Economic Optimism Index score (% satisfied minus % dissatisfied) of +19. 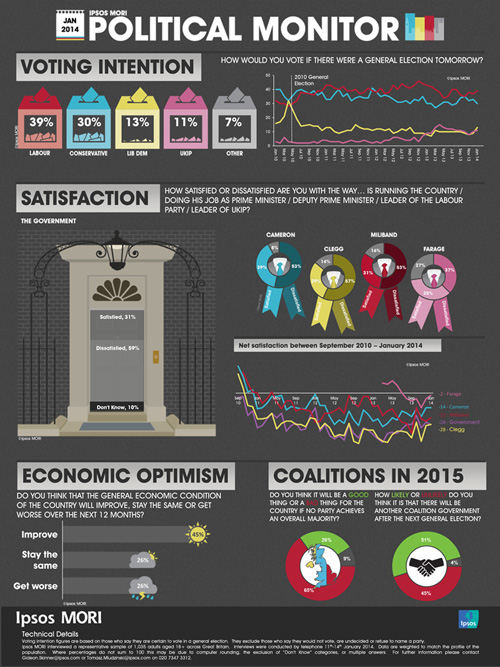 “The last few years haven't changed Britons' longstanding dislike of coalition governments, even as they half-expect to see another one in 2015. And yet many party supporters could see themselves putting up with another coalition, if it gave their party a majority - and their choice of partners might surprise some - although we should remember that some of those who might support a coalition with another party may have already switched their views (for example, some 2010 Conservative voters have already switched to UKIP, as have some 2010 LibDems to Labour).”

Ipsos interviewed a representative sample of 1,035 adults aged 18+ across Great Britain. Interviews were conducted by telephone 11th – 14th January 2014. Data are weighted to match the profile of the population.