Immigration is one of the key issues which will affect how people vote in the upcoming EU referendum, along with the effect on the economy and Britain’s sovereignty, a new Ipsos study published today finds.

The survey of c.4,000 British adults is the latest in a unique longitudinal study which looks to track how individuals’ views on immigration change over time. The latest survey finds that:

Immigration will be a big factor in how people decide to vote in the EU referendum, particularly for leavers and for undecided voters 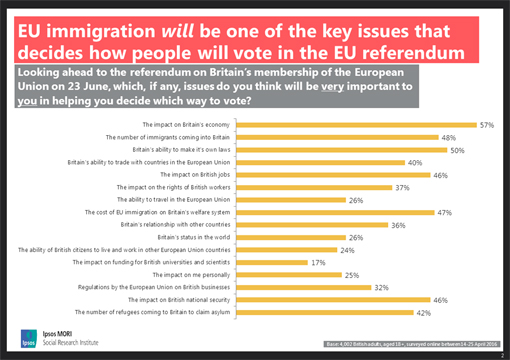 The majority (66%) think that EU immigration would decrease post-Brexit 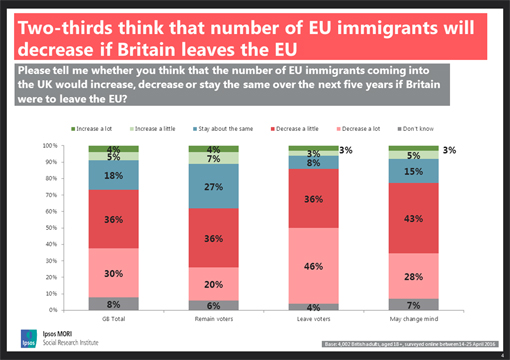 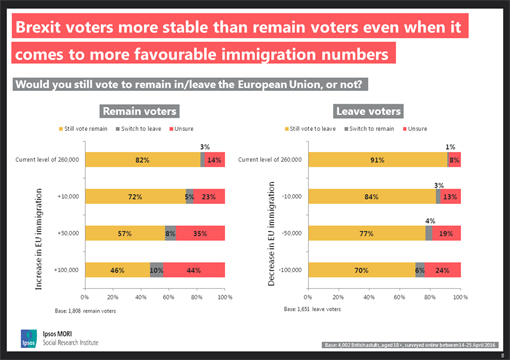 With an increased focused on the debate on immigration and the EU, more people now think that we’re getting the conversation about right

"Immigration remains a key issue in the public’s mind and will be one of the central issues that decide how people vote on 23rd June. It will be particularly important for those yet to decide which way to vote. This suggests that both campaigns will need to address the issue if they are to win over undecided voters. The survey also shows that immigration is more likely to have an impact on those voting to remain than those voting to leave; the latter group have fairly stable views on immigration whereas the former are more prone to change or uncertainty. Regardless of what happens in the EU referendum, it is unlikely that the issue of immigration will die down. The public still have a desire to see greater immigration controls and would want to see continued focus on restricting immigration."

Ipsos interviewed a representative sample of 4,002 British online adults aged 18+ between 14 -25 April 2016, with funding from Unbound Philanthropy. Interviews were conducted on Ipsos’ online panel and results have been weighted by demographic factors to represent the British population.