Ipsos’s final 2017 election poll for the Evening Standard indicates that Theresa May and the Conservatives are on course to win the 2017 General Election. Our headline estimate of voting intention is Conservative 44%, Labour 36%, Liberal Democrats 7%, UKIP 4%, and Greens 2%.   The age pattern seen throughout the election continues, with young people more likely to vote Labour than Conservative (by 49% to 28% among 18-34s), while the 65+ say they will vote Conservative by 60% to 23% for Labour.

One in five of voters (19%) say they might still change their mind before they vote (similar to our final poll in the 2015 election). Labour supporters are marginally more likely to say they could change their mind, one in five (19%) compared to 13% of Conservative voters (and 33% of Liberal Democrats).

Theresa May leads Jeremy Corbyn in the final days of the campaign when it comes to who the public think would be the most capable Prime Minister. Just under half think Mrs May would be the most capable (47% - down three points from last week) while over one in three choose Mr Corbyn (36% - little change).  Again, young people prefer Mr Corbyn (by 54% to 29% among 18-34s) while older voters still opt for Mrs May (by 65% to 21% among those aged 65+). 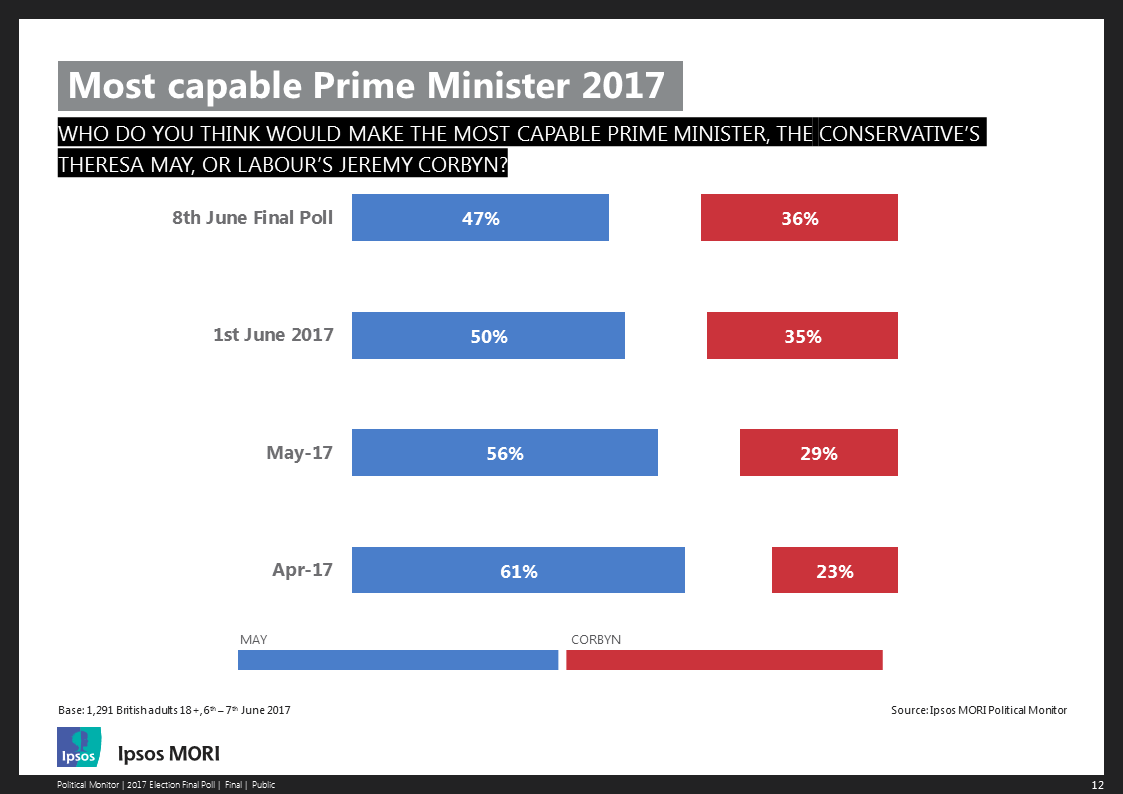 The Conservatives had a wobble last week, but have regained a clear lead in the last few days.  Theresa May’s advantage over Jeremy Corbyn is also lower than it was at the start of the campaign, but she and her party have kept their support among key voting groups such as older people.  Having said that, one in five voters say they might still change their mind, so there are still votes to fight for.

Ipsos interviewed a representative sample of 1,291 adults aged 18+ across Great Britain. Interviews were conducted by telephone 6th June – 7th June 2017.  Data are weighted to the profile of the population (by age, gender, region, work status/sector, social grade, car in household, child in household, tenure, education (updated) and newspaper readership), and voting intention figures are based on all registered, and an adjustment for turnout overclaim based on age, and now also including tenure.  As in all our final polls in recent general elections, we have reallocated refusals to the voting intention question on the basis of their newspaper readership.