Boost for UKIP and Nigel Farage after Europe Debates

Ipsos’s Political Monitor for April shows that it has been a good month for George Osborne, with satisfaction in his performance as Chancellor at its highest level since Gordon Brown in 2006, and the highest for a Conservative Chancellor since Geoffrey Howe in 1980. Just under half (47%) are satisfied in Mr Osborne’s performance, with 44% dissatisfied. This comes during a period of steady economic optimism, with 49% believing the economic condition of the country will improve over the next year and 24% believing it will get worse, giving an Ipsos Economic Optimism Index score (% get better minus % get worse) of +25. 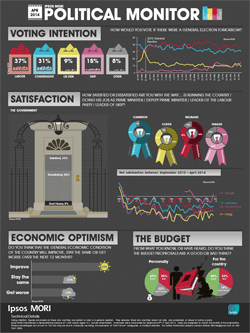 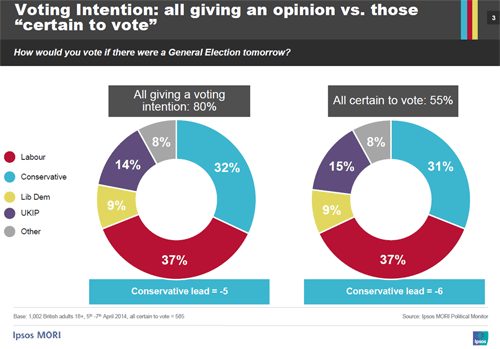 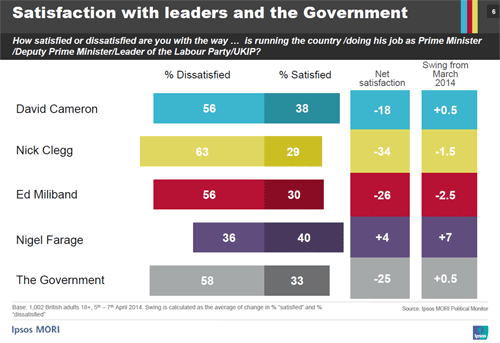 “This has been the best received Conservative Budget since Nigel Lawson’s 1987 pre-election Budget, yet it does not yet appear to have had a sustained impact on voting intentions. A number of factors are likely to be contributing to this: the widespread belief that there is a cost of living crisis, the rise of UKIP in the polls, and the Maria Miller expenses scandal over the weekend. Meanwhile, just as in February 2010, Labour and the Conservatives are seen as neck-and-neck as the party with the best policies for Britain.”

Technical note: Ipsos interviewed a representative sample of 1,002 adults aged 18+ across Great Britain. Interviews were conducted by telephone 5th – 7th April 2014. Data are weighted to match the profile of the population.