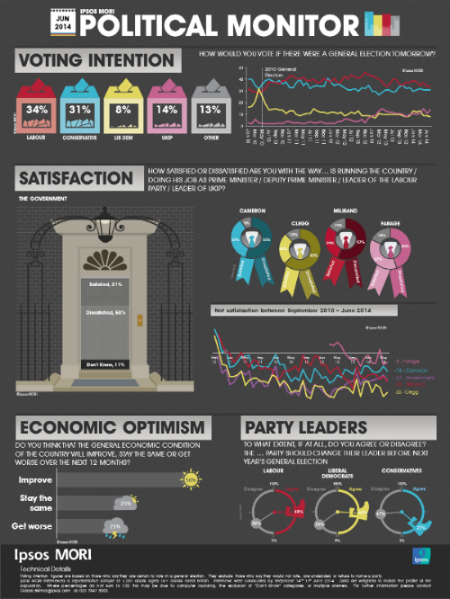 Appetite for a change in leadership appears to come more from general dissatisfaction than with a specific alternative in mind, however; over half of those desiring a change of leader for each party do not know who they would want instead (54% for Labour, 59% for the Liberal Democrats and 62% for the Conservatives). Asked unprompted, the most mentioned alternative for Labour is David Miliband on 15%, with frontbenchers Ed Balls and Yvette Cooper behind on 3%. For the Liberal Democrats the leading alternative is Vince Cable on 16%, ahead of Danny Alexander on 2%; for the Conservatives Theresa May is mentioned by 5%, with of Boris Johnson and William Hague both on 4%.

Ed Miliband is also not yet seen as being ready to be Prime Minister by the majority of Britons. Just under a quarter (22%) think the Labour leader is ready for premiership, with 65% disagreeing, showing little change from when last asked in April 2013. On the other hand, an increasing number think Labour as a whole is ready to form the next government, though the majority still disagree; 35% now think Labour are ready for government, with 52% disagreeing, compared with 29% agreeing and 58% disagreeing last year.

The Conservatives lead Labour in being seen as having the best team of leaders to deal with the countries problems (34% to 23%, with UKIP on 5% and the Liberal Democrats on 2%) and as the most clear and united about what its policies should be (27% to 17%). Labour are slightly behind UKIP in terms of clarity and unity on policies (Labour on 17% to UKIP’s 19%, with the Liberal Democrats on 3%).

Voting intention has shown little change from last month, with Labour and the Conservatives unchanged on 34% and 31% respectively. After the European elections, UKIP are up three percentage points to 14%, with the Liberal Democrats down one percentage point on 8%.

Economic optimism is down slightly on last month’s record score, but is still high, with 50% expecting the general economic condition of the country to improve, 25% expecting it to stay the same and 21% expecting it to get worse, giving an Ipsos Economic Optimism Index score (% improve minus % get worse) of +29.

Satisfaction ratings for the main party leaders and government have remained broadly stable since last month, with slight falls for Mr Cameron and Mr Miliband, and small increases for Mr Clegg and Mr Farage:

“All the leaders have been facing questions about their leadership, but in the eyes of the public it is Ed Miliband and Nick Clegg who have most to worry about. But there is no obvious alternative in the public’s mind, which could help them - most of those who want a change say ‘don’t know’ when we ask them who they would prefer.”

Ipsos interviewed a representative sample of 1,001 adults aged 18+ across Great Britain. Interviews were conducted by telephone 14th – 17th June 2014.  Data are weighted to match the profile of the population.