In a poll taken before the EHRC’s report into anti-Semitism in the Labour Party and before Jeremy Corbyn’s suspension, Labour leads the Conservatives by 5 points. Labour 42 (+5 from September), Conservatives 37 (-3) Lib Dems 8 (nc) Green 5 (nc) Others 9% (nc). This is the first Labour lead with Ipsos of Johnson’s premiership. 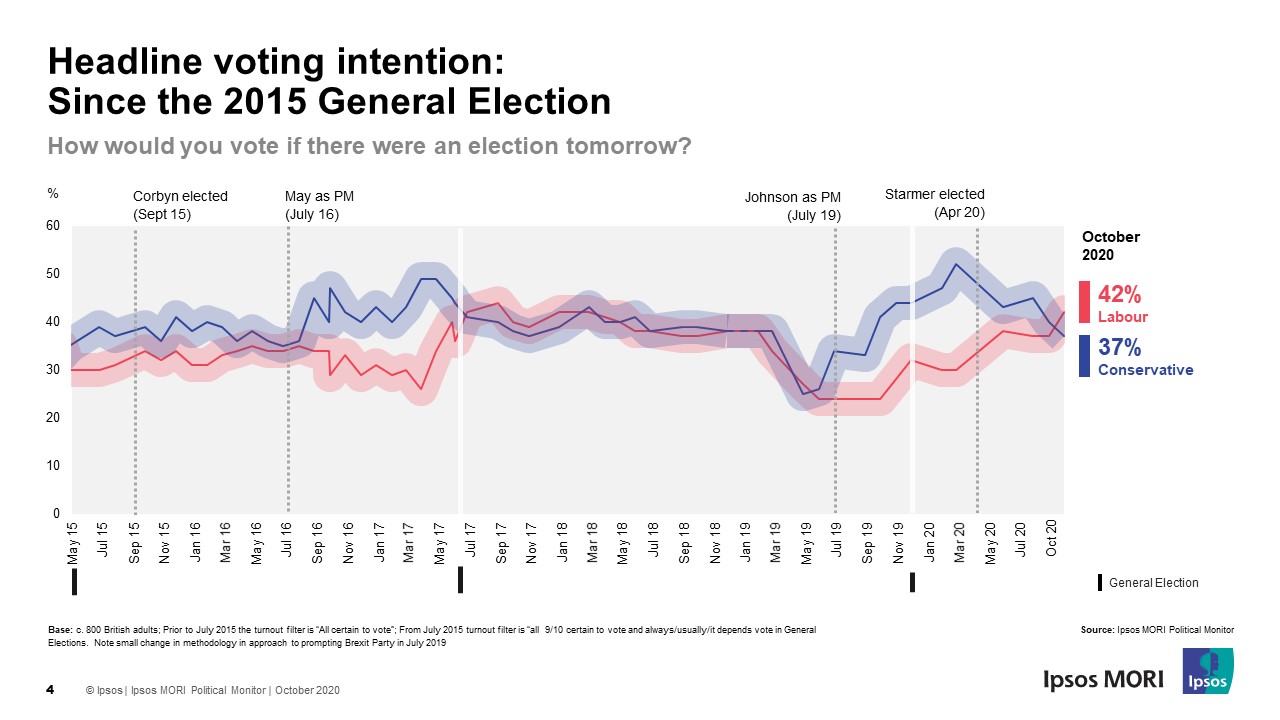 There's falling approval with how key players are handling coronavirus compared to August / September. Compared to September – when only satisfaction with government was asked:

Compared to August when satisfaction with all players was asked:

40% trust Boris Johnson ‘a great deal’ or ‘a fair amount’ to get the balance right between ‘protecting people's health and protecting the economy in the response to the coronavirus’. This compares to 45% for Keir Starmer, 57% for Rishi Sunak and 56% for Chris Whitty. 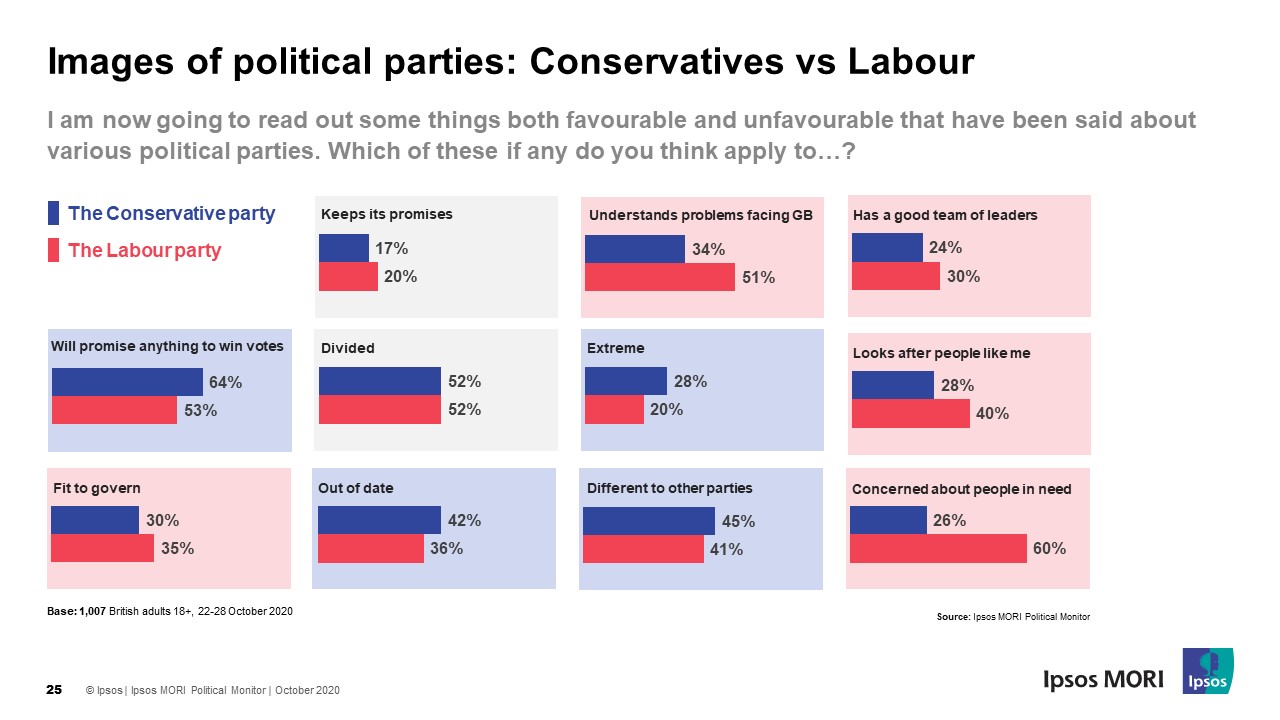 It is possible that Labour’s lead could be temporary as the Conservatives still lead Labour overall as being seen as having the best policies in certain areas. 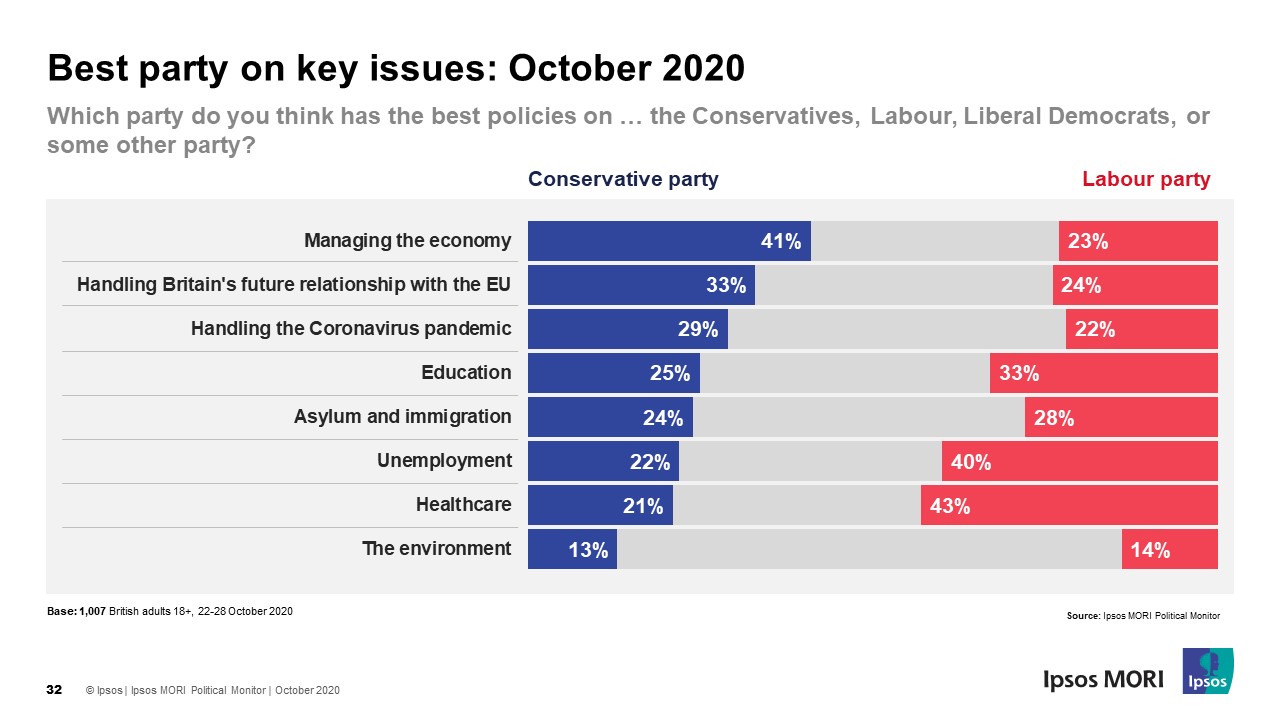 The Conservatives lead Labour on:

Meanwhile Labour leads the Conservatives on:

Both are neck and neck on handling the environment (Con 13%; Lab 14%) while the Greens have the advantage with 32%.

Ipsos Director of Politics, Keiran Pedley said of the findings:

With the government facing challenges on multiple fronts, it is perhaps unsurprising to see Labour take the lead. Labour will be encouraged that leader Keir Starmer continues to post net positive satisfaction ratings and that the party is seen as less divided and extreme than it was before the last General Election and more fit to govern. However, with the Conservatives still leading Labour on being seen to have the best policies on handling the coronavirus pandemic, Britain’s relationship with the EU and managing the economy, it remains to be seen whether Labour’s lead will last, or prove short lived.

Ipsos interviewed a representative sample of 1,007 adults aged 18+ across Great Britain. Interviews were conducted by telephone 22nd October – 28th October 2020. Data are weighted to the profile of the population. All polls are subject to a wide range of potential sources of error. On the basis of the historical record of the polls at recent general elections, there is a 9 in 10 chance that the true value of a party’s support lies within 4 points of the estimates provided by this poll, and a 2 in 3 chance that they lie within 2 points.