Majority of Britons believe the government has done a good job for the rich, but a bad job for their own standard of living 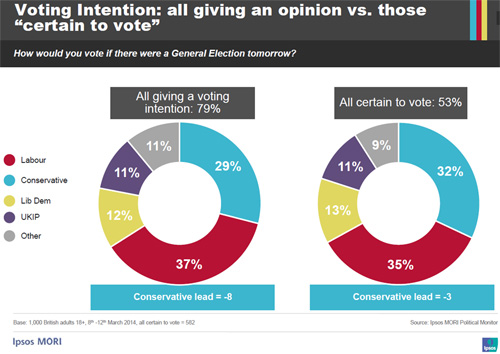 The public still think George Osborne would make a more capable Chancellor than Ed Balls, although the gap between them has narrowed since we last asked this question in December 2013. Mr Osborne now has a five percentage point lead over Mr Balls, backed by 38% to Mr Balls’ 33%. This is down from an eleven point advantage for Mr Osborne in December.

However, this does represent a significant improvement for the government’s ratings since October 2011. The proportion thinking they have done a good job managing the economy has increased from 36% to 47%, and those thinking they have done a good job keeping unemployment down have increased from 15% to 44% (ratings on taxation and public expenditure have only increased slightly from 32% to 35%). All, though, are still below the heights Labour achieved when it was in power.

Credit for economic growth in the UK is split between factors outside of party politics and the coalition government and its component parties. The state of the global economy is seen as deserving the most credit, with 37% citing this factor, while a quarter (25%) think the Bank of England deserves most credit. The coalition government overall is credited by 20%, with the Conservatives on 15%. Just four percent of the public credit the Liberal Democrats for economic recovery, behind both the European Union and the previous Labour government (both on seven percent). When those crediting the coalition government overall, the Conservatives and the Liberal Democrats are combined, they come to 37% (it should be noted that respondents could select up to two answers in any combination for this question).

The Liberal Democrats do gain the credit for raising income tax allowances to £10,000 from this April, however. Despite recent debates about the matter, 45% credit the Liberal Democrats – although a third (33%) say the Conservatives deserve most credit. 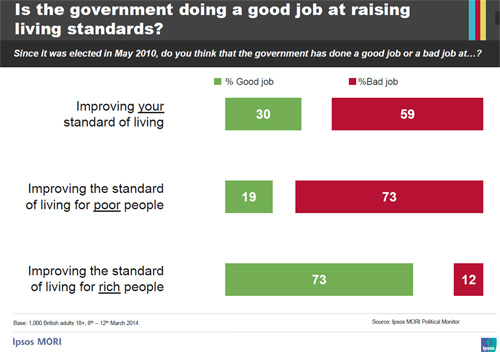 Regarding their own standard of living, six in ten (59%) believe the government has done a bad job since it was elected, with 30% saying they have done a good job. People in social classes AB, C1 and C2 are all equally critical, and those in social class DE even more so, with only a quarter (24%) feeling the government has done a good job improving their standard of living.

People’s voting intentions are little changed from last month, with the exception of Labour who are down three percentage points to 35%. The Conservatives (32%), Liberal Democrats (13%) and UKIP (11%) are all up one percentage point each.

Economic optimism remains high. Nearly half (48%) think the general economic condition of the country will improve over the next 12 months, while 25% think it will get worse, and 24% stay the same. This gives an Ipsos Economic Optimism Index (% get better minus % get worse) of +23. 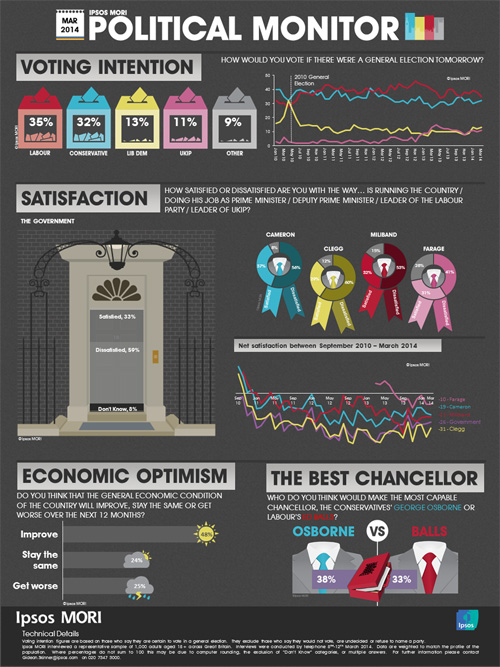 “The Conservatives still hold the lead on the economy, as economic conditions improve, which may help explain why they are not losing many votes to Labour (who have been picking up more from the Liberal Democrats). But people do not think the government has improved their own personal standard of living, which may be partly why the Conservatives aren't increasing their vote share either.”

Ipsos interviewed a representative sample of 1,000 adults aged 18+ across Great Britain. Interviews were conducted by telephone 8th-12th March 2014. Data are weighted to match the profile of the population.