New polling by Ipsos for the Sunday Express shows Britons are split when considering how well Rishi Sunak is performing as Prime Minister. Now, 28% say he is doing a good job, up from 21% at the start of the month, while around a quarter (24%) believe he is performing badly (down 6 points). 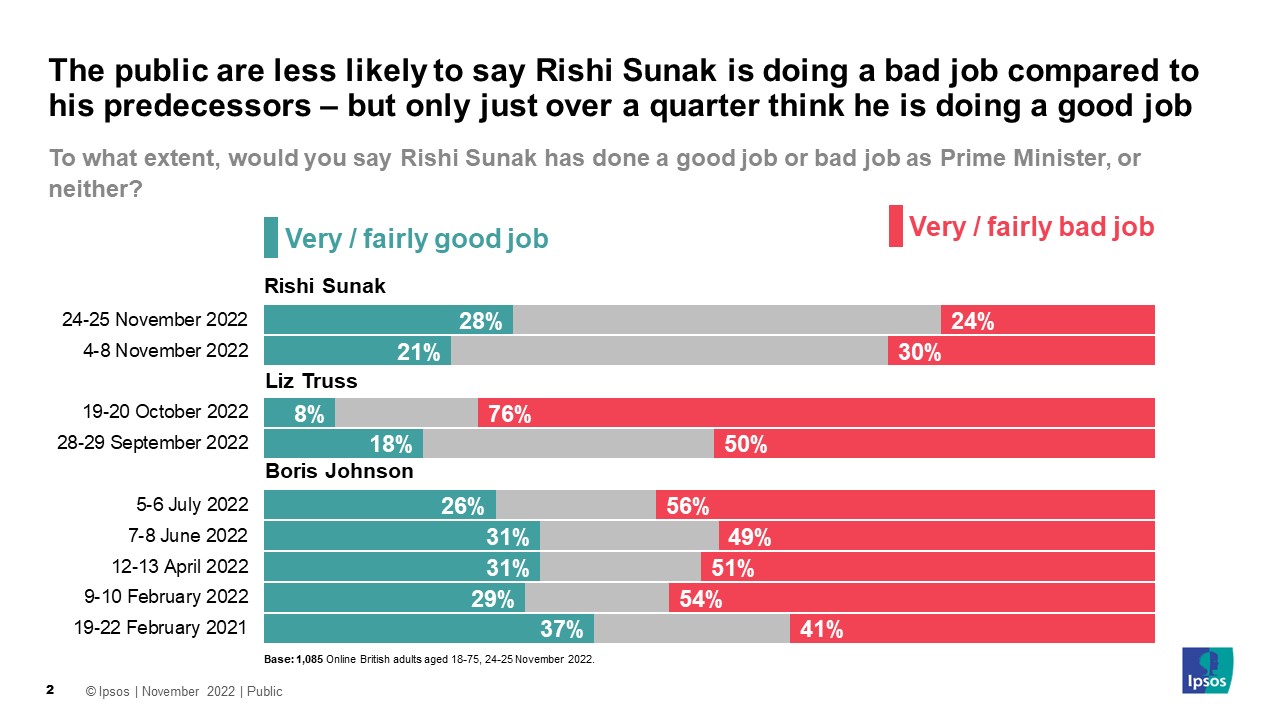 Compared to his predecessors, Sunak is doing far better than Liz Truss, only 8% said she was doing a good job in late-October (76% said bad), while a similar proportion said Boris Johnson was performing well at the start of July (26%). However, far more said Mr Johnson was doing a bad job (56%) at the time than Sunak today. Sunak trails Starmer slightly, 35% say Keir Starmer would do a good job as Prime Minister, while 25% expect him to perform poorly.

Looking towards the next general election, few believe Rishi Sunak will win the next General Election. While 28% think it is likely that Sunak will win, more than half think it unlikely (55%). 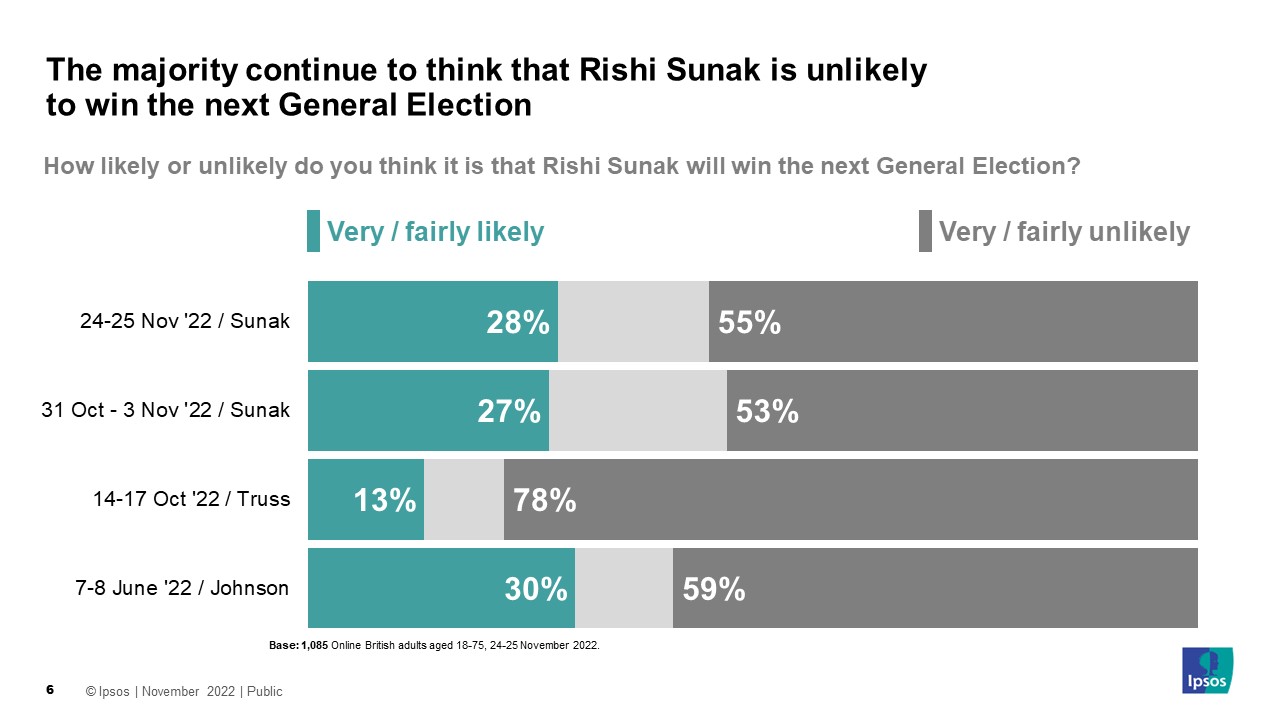 This remains steady in comparison to the start of the month (27% likely, 53% unlikely).  Again, Sunak registers better numbers than Liz Truss. Just 13% thought she was likely to win the next election in October, 78% disagreed.

Looking to the opposition, around half say Keir Starmer is ready to be Prime Minister (49%), including a third (32%) of 2019 Conservative voters. Meanwhile, a similar proportion say he is likely to become PM one day (50%), 1 in 3 think this is unlikely (33%). 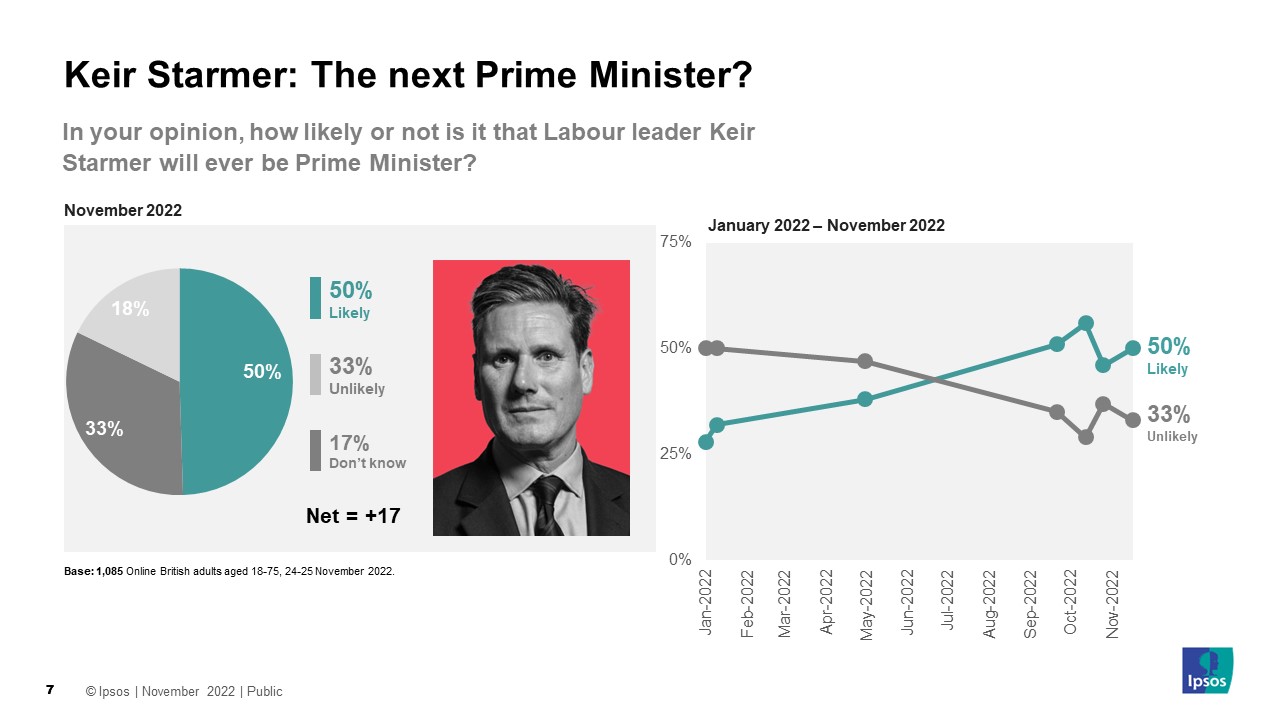 Whilst Rishi Sunak cannot be described as particularly unpopular with the British public, there is a prevailing sense that they expect him to lose the next General Election and Keir Starmer to be Prime Minister. One reason for this is an overwhelming sense of pessimism about the economy and a sense that Conservative policies over 12 years are a significant contributing factor. Sunak will hope he can change such perceptions between now and the next General Elections and reverse the Conservatives' ailing political fortunes.

Ipsos surveyed a representative quota sample of 1,085 adults aged 18-75 in Great Britain. Surveys took place on the online Omnibus 24th-25th November 2022. Data has been weighted to the known offline population proportions. All polls are subject to a wide range of potential sources of error.