Labour up five points but still neck-and-neck with Conservatives

Ipsos MORI’s first Political Monitor of 2015 shows that the Conservatives and Labour are neck-and-neck, with Labour’s vote share increasing five points (from 29% in December 2014) to 34%. The other parties are holding steady though, with the Conservatives up one point on 33% and the Liberal Democrats down one point on 8%, joined by the Greens who are also on 8%. UKIP are down two points on 11%. 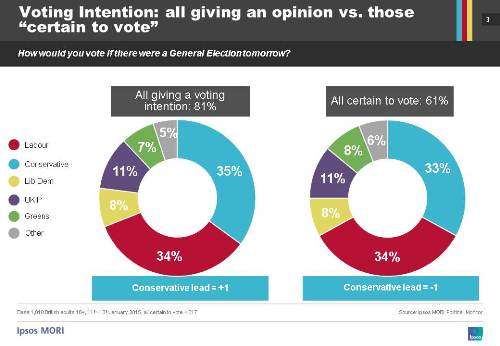 Healthcare-related issues have emerged as the dominant issue behind Britons’ choice of party. Over four in ten (46%) say this is a very important issue for them when weighing up their ballot choice. This is up 17 points since September 2014, when 29% cited this issue. Managing the economy is second on 33% (from 31% in September). Asylum and immigration is the third-most cited issue, with just over a quarter (27%) mentioning this area (down from 30% in September 2014). One in five (20%) mention education as a top election issue, with nine percent each mentioning the EU and unemployment. 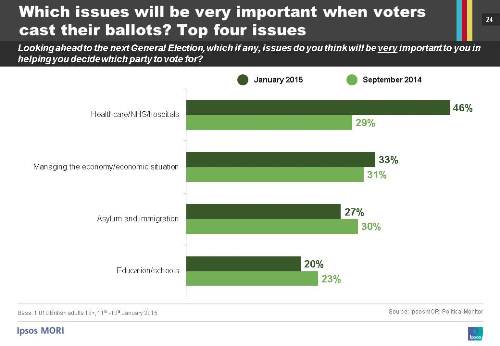 Nigel Farage’s net satisfaction rating has also recovered somewhat since last month’s lowest ever score of -20; this month’s figure is -13. Ed Miliband and Nick Clegg continue to lag behind Messrs Farage and Cameron in the ratings: 26% are satisfied and 61% are dissatisfied with Mr Miliband, giving a net rating of     -35 (although up from -38 last month), while 25% are satisfied and 64% are dissatisfied with Mr Clegg, giving a net satisfaction rating of -39 (roughly the same as last month's -40). 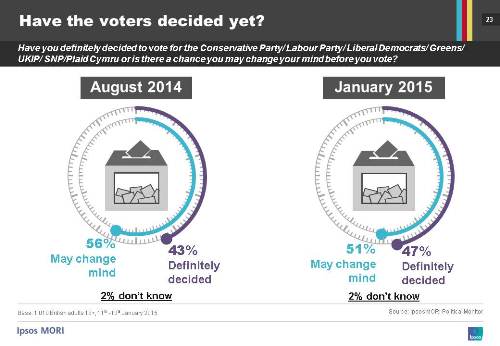 "The first skirmishes of the campaign have been to Labour's advantage, with their strongest card of the NHS taking a clear top spot in the public's concerns. But despite the dominance of the NHS and Labour's rise the two main parties are still only neck-and-neck, and with half of voters saying they may change their minds there is a long way to go.”

Ipsos interviewed a representative sample of 1,010 adults aged 18+ across Great Britain. Interviews were conducted by telephone 11-13 January 2015.  Data are weighted to match the profile of the population.