Corbyn and Cameron’s satisfaction ratings fall to their lowest ever

Ipsos’s July Political Monitor reveals that over half (55%) believe that Theresa May has what it takes to be a good Prime Minister, up from 28% in July 2015. Her ratings are particularly high among Conservative voters, among whom 81% think she has what it takes. 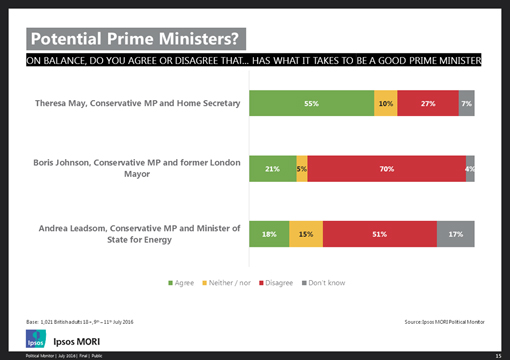 May’s ratings are well ahead of those for Andrea Leadsom and Boris Johnson. One in five (18%) think that Andrea Leadsom has what it takes to be a good PM (20% among Conservative voters), and 21% say the same about Boris Johnson (23% among Conservative voters). Johnson’s ratings have fallen since last year – now 70% disagree he has what it takes, up from 52% last July. Fieldwork was conducted 9-11 July, with the vast majority carried out before Andrea Leadsom retired from the race.

On his final day in office, David Cameron’s satisfaction ratings as Prime Minister have fallen to his lowest ever. Twenty-eight percent are satisfied with the way he is doing his job (down seven points in the month), and 66% dissatisfied (up eight points). His net rating of -38 is comparable with public views of Gordon Brown in 2009.

With Labour heading into their own leadership battle, Jeremy Corbyn’s ratings have also fallen to their lowest since he was elected. Twenty-four percent are satisfied with the way he is doing his job as Labour leader (down three points in the month), while 65% are dissatisfied (up 13 points), giving him a net rating of -41. His rating among Labour voters has also fallen (45% satisfied and 48% dissatisfied).

Meanwhile, Tim Farron still has to build a profile with the British public. One in five (21%) are satisfied with his job as Liberal Democrat leader, 37% are dissatisfied and 42% say they don’t know.

Voting intentions are little changed over the month, with headline figures of the Conservatives at 36%, Labour 35%, the Liberal Democrats at 11% and the UK Independence Party at 8%.

“Theresa May’s honeymoon seems to have started even before she is officially announced as PM. Conservative voters in particular have very few doubts about her. Labour supporters meanwhile are less positive about their own leader, as Jeremy Corbyn’s overall ratings fall to the lowest for a Labour leader since Ed Miliband in 2014. ”

Ipsos Political Monitor July 2016 from Ipsos
Technical note Ipsos interviewed a representative sample of 1,021 adults aged 18+ across Great Britain. Interviews were conducted by telephone 9th-11th July 2016. Data are weighted to the profile of the population.