Despite progress to close the gender divide, careers in Science, Technology, Engineering and Mathematics (STEM) field remain male-dominated. New research by Ipsos for the Department for Education illustrates a continued gender imbalance among school pupils and their parents/carers when considering STEM jobs.

Ipsos carried out the fifth wave of the Department for Education’s Pupils and their Parents/Carers omnibus survey in July/August 2018. 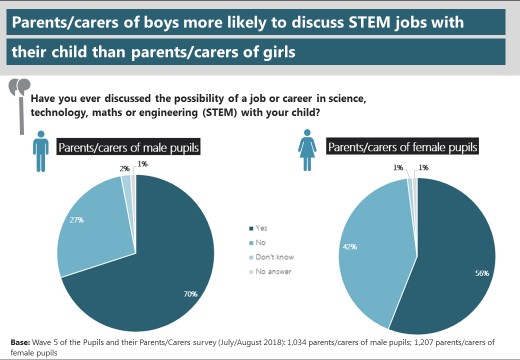 Overall, around half of school pupils (54%) reported considering a job or career in STEM when they leave education. But within this data, more boys than girls recorded they had contemplated this option: 61% of schoolboys said they have considered a STEM job or career, compared with 48% of schoolgirls. 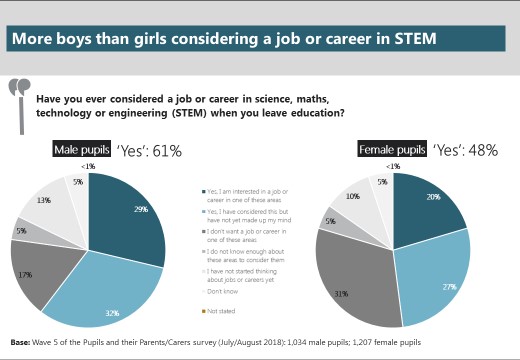 The Department for Education published a new careers strategy in December 2017, which included proposals for promoting gender equality by increasing young people’s contact with employers, especially in relation to STEM subjects. This resonates with these research findings, which show that school pupils were most likely to report finding ‘meeting employers from these sorts of jobs’ very or somewhat helpful (83%) in terms of understanding more about STEM careers.

DfE have also committed to increasing female participation in STEM subjects at school and have outlined several initiatives to encourage more young women into STEM careers. The Department’s proposal to improve STEM careers advice in schools  reflects the research finding that ‘information offered in careers education’ within the school environment is beneficial, with the majority of school pupils saying this had been very or somewhat helpful (82%) in contributing to an increased knowledge about STEM jobs.

This fifth wave of the omnibus survey of pupils and their parents/carers surveyed a nationally representative sample of young people at secondary schools and colleges in England. A postal push-to-web approach was used, using the National Pupil Database (NPD) as a sampling frame for secondary school pupils (at state-funded schools), and the Individualised Learner Records (ILR) as a sampling frame for college students. In each household, two separate questionnaires were administered: one to the school pupil or college student, and one to their parent/carer. All respondents self-completed the questionnaire. Wave 5 was soft-launched to a subset of the sample on Monday 2nd July 2018. The main fieldwork began on Monday 9th July 2018, and closed for all respondents on Tuesday 28th August 2018.