The November Ipsos Political Monitor, taken 9-16 November (before the Autumn Statement), shows Rishi Sunak starts his premiership relatively liked by Britons, and overtaking Keir Starmer in their views of having what it takes to be good PM. However, the proportion saying they like the Conservative party has fallen further since June to its lowest level since Ipsos started asking the question in 2007, while the proportion who like the Labour Party slightly rises.

Labour and Keir Starmer are also both more trusted on reducing the cost of living and improving public services, while those who do not trust the Conservatives on the economy blame their record over the last 12 years, even slightly more than the Liz Truss mini-budget, and nine in ten of them think it unlikely the Conservatives will be able to win back their confidence before the next election.

How liked are the parties and their leaders?

Nearly half (47%) say they like Rishi Sunak, against two in five (41%) who dislike him. This makes Mr Sunak more liked than Boris Johnson earlier this year (39% liked him in September 2021, 27% in June 2022 – previous to that Mr Johnson was about as liked as Mr Sunak, but with more dislikes).

However, just one in four (26%) say they like the Conservative party, which is their worst rating since June 2007 when they scored 29% under David Cameron. With 62% saying they dislike them, the party’s current net likeability rating of -36 also beats their previous low of -30 under Boris Jonson this June.

The narrative is reversed for the Opposition, as the Labour party is more popular than its leader, Keir Starmer. Two in five (39%) say they like Sir Keir, against nearly half (49%) who say the opposite (both little changed since June). Whereas half (49%, +5) like the Labour party, versus two in five (39%, -5) who dislike them. These are the party’s best scores since 2019. 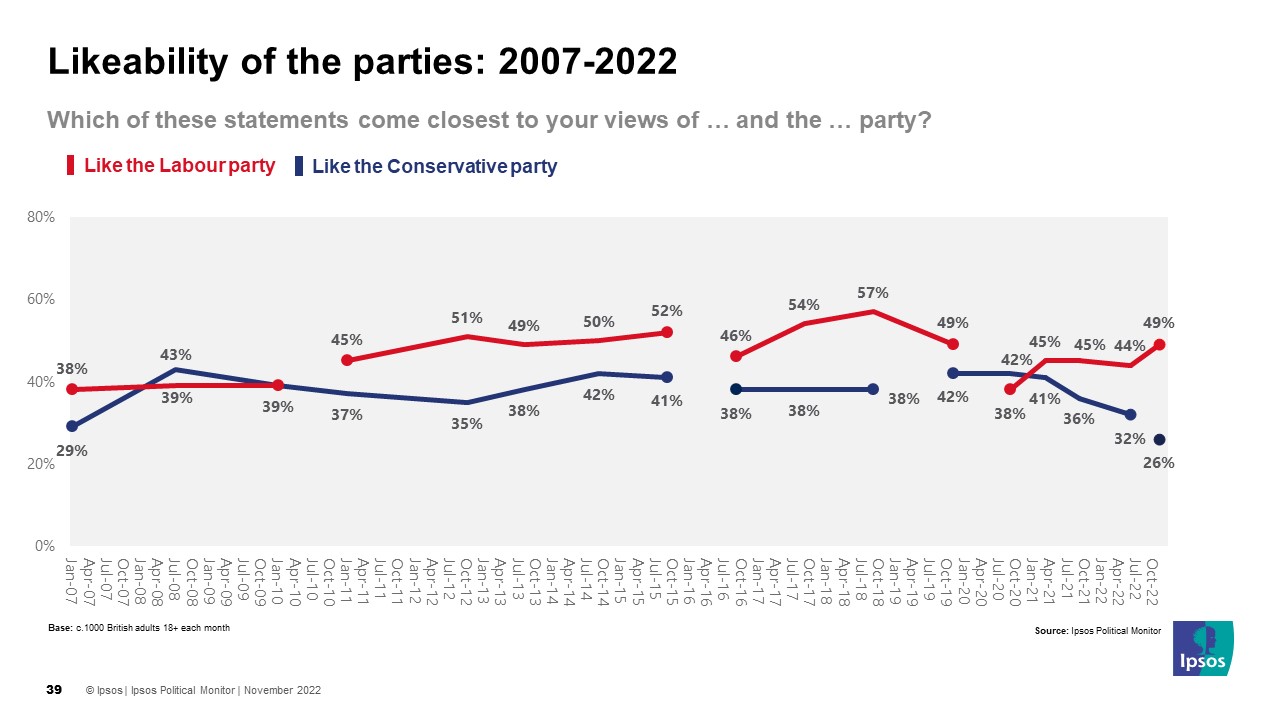 Perceptions of Rishi Sunak have received a small boost since entering Number 10. Two in five (42%) agree he has what it takes to be a good Prime Minister (+7 since the Conservative leadership race in July), against a third who disagree (34%, down 9). His numbers are much higher among Conservative supporters where over three in five agree (78%, +29 since July).

This puts him slightly ahead of Keir Starmer where opinion is more divided (35% agree he has what it takes, 37% disagree), although again he performs better among his own party supporters where two in three (65%) agree.

Similarly, Mr Sunak has a small lead over Keir Starmer in a head-to-head on would be the most capable Prime Minister – 41% opt for the Conservative leader, compared to 35% for Labour’s. This is the first time Sir Keir has been ahead on this since September 2021, having led against Boris Johnson and Liz Truss since then.

How trusted are both parties and their leaders on the economy? 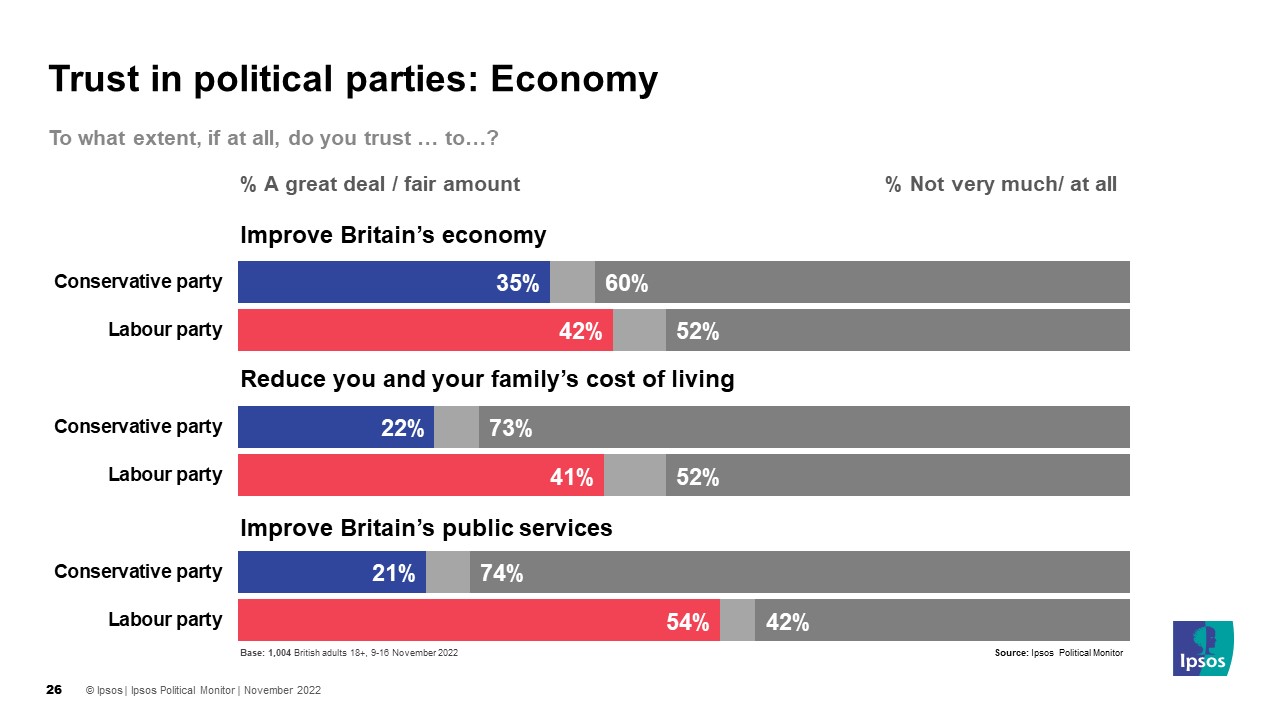 Rishi Sunak performs marginally better than his party against Keir Starmer and is very slightly more trusted to improve Britain’s economy than the Labour leader (43% for Sunak vs. 39% for Starmer). However, Sir Keir retains large leads on reducing people’s cost of living (26% for Sunak vs. 40% for Starmer) and improving Britain’s public services (27% vs. 50%).

When this group is asked how likely it is the Conservatives will regain their trust on the economy before the next General Election, nine in ten (90%) say it’s unlikely, although 2019 Conservatives in this group would be more open to persuasion (33% likely vs. 67% unlikely).

In his first satisfaction rating as Prime Minister, three in ten (29%) say they are satisfied with Rishi Sunak’s job performance, against two in five (37%) dissatisfied and a third (34%) who don’t know. This is better than Liz Truss’ final ratings (16% satisfied, 67% dissatisfied), but means Mr Sunak starts with a negative net satisfaction rating (-8), as did Liz Truss (-2) and Boris Johnson (-7) in their first months, although this is worse than other Prime Ministers who took office mid-Parliament, such as Theresa May (+35), Gordon Brown (+16) and John Major (+15). His ratings are better among Conservative supporters (66% satisfied vs. 12% dissatisfied). 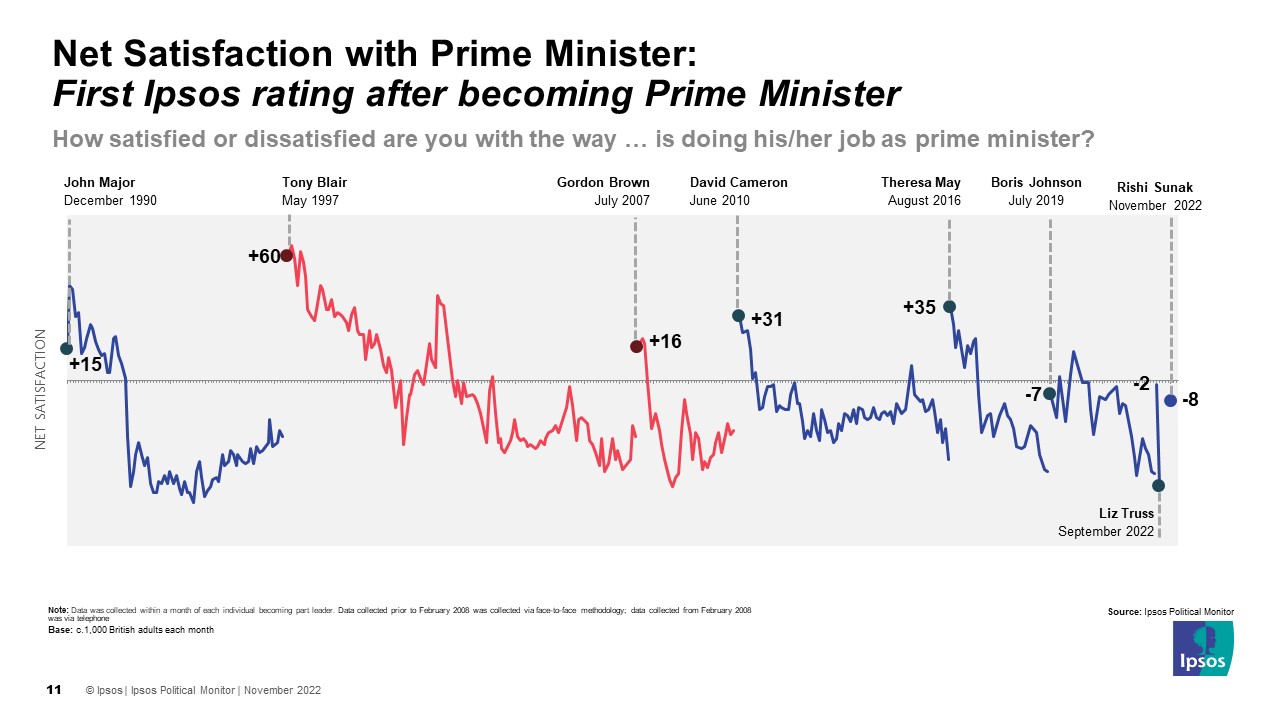 This reflects poor satisfaction figures for the Government in general. Three in four (76%) are dissatisfied with the Government, against 16% satisfied, giving a net satisfaction of -60. Again, these scores are similar to those received by Truss’ government (-50) and Johnson’s (-57) in their first outing, but behind those achieved by May’s (-4), Brown’s (-17) and Major’s (-31) when they took over mid-Parliament.

Keir Starmer’s ratings are relatively unchanged since last month, with 36% satisfied (-2) and 42% dissatisfied (+3), giving a net satisfaction rating of -6.

Rishi Sunak is personally fairly well-liked, relatively trusted on the economy, and is posing warning signs for Labour in the way he has overtaken Keir Starmer’s lukewarm scores as Prime Ministerial material. But so far, he has not been able to bring much of a honeymoon to the Conservative party brand, which remains as unpopular under him as at any time over the last 15 years. Looking ahead, delivery on substantive issues in the face of a sceptical public will be key, as satisfaction with government performance remains well below the historical average and with Labour and Keir Starmer both much more trusted on the cost of living and improving public services.

Ipsos interviewed a representative sample of 1,004 adults aged 18+ across Great Britain. Interviews were conducted by telephone: 9th to 16th November 2022. Data are weighted to match the profile of the population. All polls are subject to a wide range of potential sources of error. On the basis of the historical record of the polls at recent general elections, there is a 9 in 10 chance that the true value of a party’s support lies within 4 points of the estimates provided by this poll, and a 2 in 3 chance that they lie within 2 points. This is especially important to keep in mind when calculating party lead figures.