Which members of the Royal Family are liked the most?

A new global Ipsos survey, carried out in 28 countries in the run up to the upcoming Royal Wedding between Prince Harry and Meghan Markle, has examined the level of interest in the Royal event, as well as wider feelings towards the Royal Family.  The survey, carried out online among adults aged under 65, finds that the Queen and Prince Harry are the most liked members of the Royal Family overall around the world, each picked by 23% on average.  Next come the Duke and Duchess of Cambridge, chosen by 17% and 18% respectively, and their children George and Charlotte (picked by 10% and 9%), the same as Prince Charles, the first in line to the throne (with 8%). 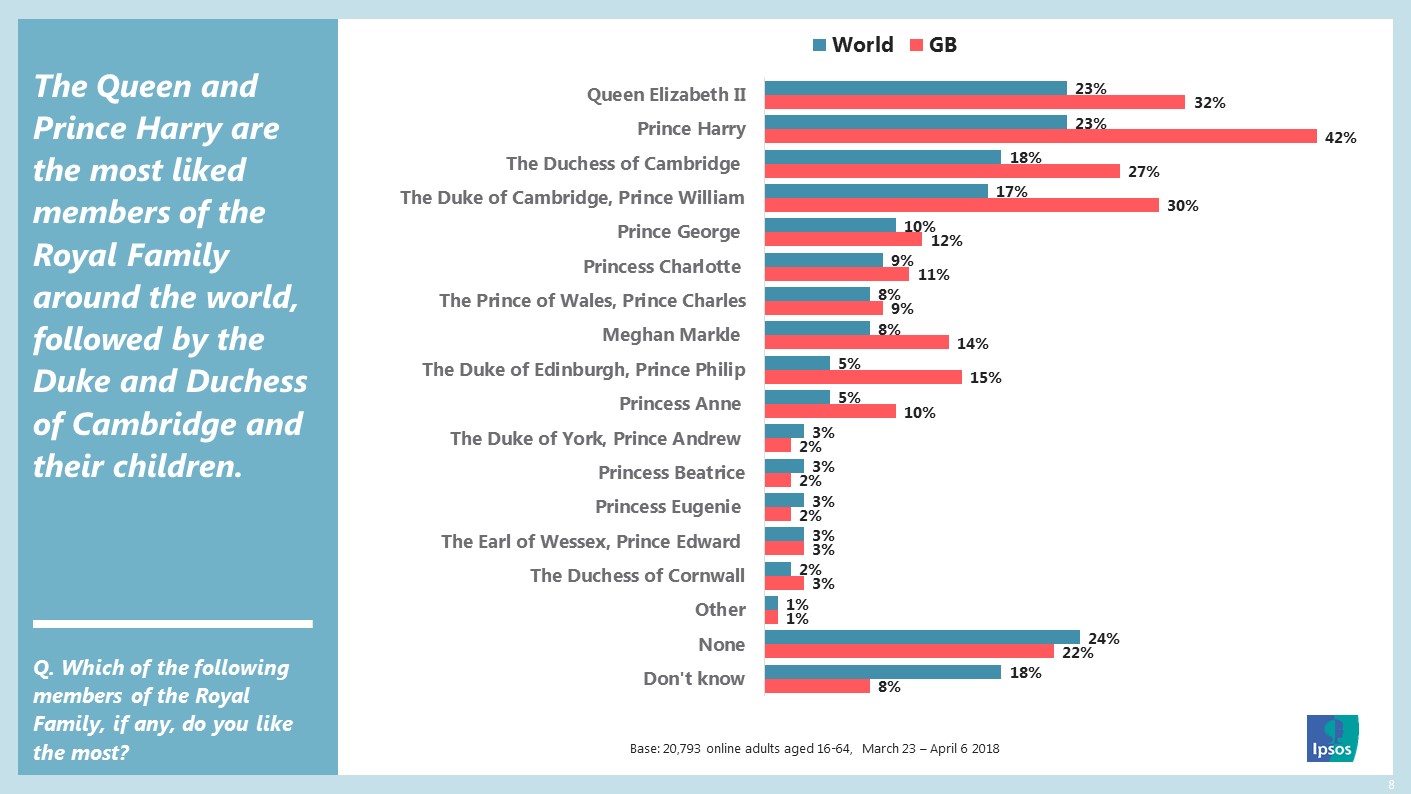 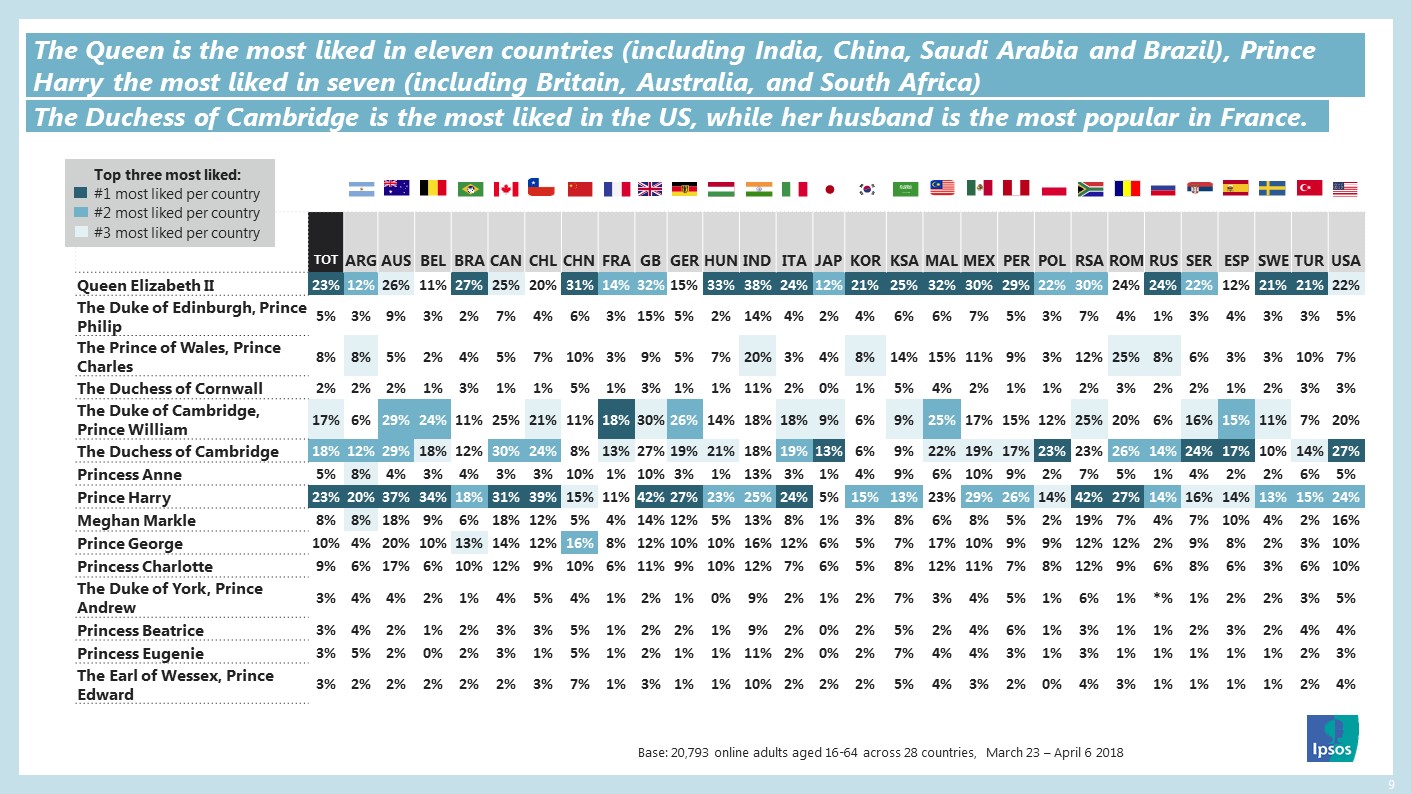 Individual members of the Royal Family tend to be viewed more favourably – notably the Queen (42% favourable on average), Prince William and Catherine (43% and 39% respectively), and Prince Harry (41%).  Prince Charles receives the lowest favourability scores (24% favourable, the same as those who are unfavourable), though again just over half are either neutral or don’t know. 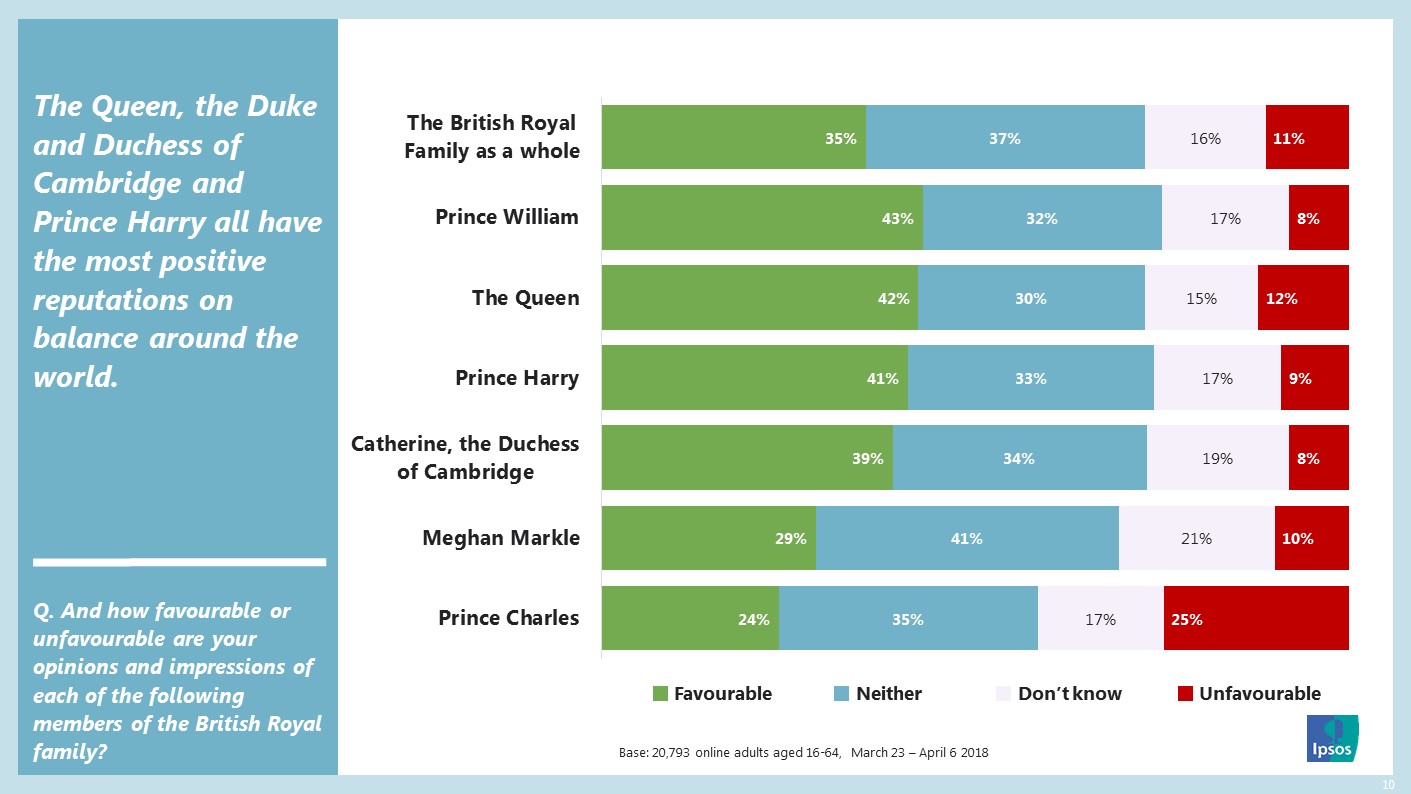 Meghan Markle, whose wedding to Prince Harry is on May 19th, is also starting from a positive base, albeit with the lowest profile of all, with 29% feeling favourable towards her, just 10% unfavourable, and six in ten either neutral (41%) or who say they don’t know (21%).  In every country people are more favourable than unfavourable, and she receives her highest scores in her native US, where 43% say they have a favourable opinion towards her. 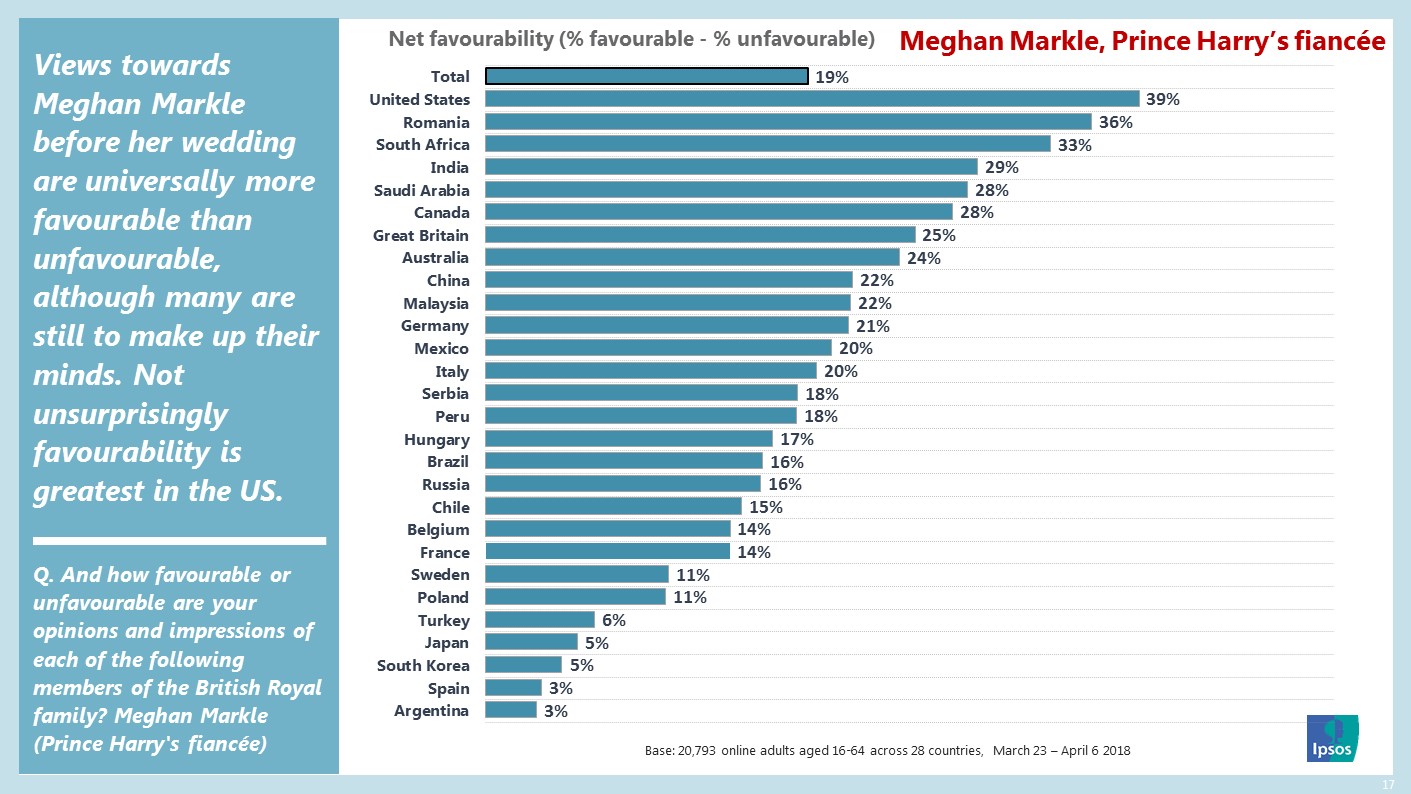 What impact does the Royal Family have on the image of the UK?

When asked what impact the Royal Family has on their views of Britain, around half on average (51%) say it makes no difference.  Amongst those who do have an opinion, though, the Royal Family does have a net beneficial effect, by 23% to 11%.  In 22 of the countries surveyed, the impact on Britain’s reputation is more positive than negative – especially in Romania, with a net positive impact score (positive impact minus negative impact) of +33, India (+27), Malaysia (+26), Saudi Arabia (+25) and Brazil (+24).  Views in France are finely balanced, while in four countries the Royals have a net negative impact on views of Britain: Chile (-4), Spain (-5), Turkey (-6) and most notably Argentina (-10). 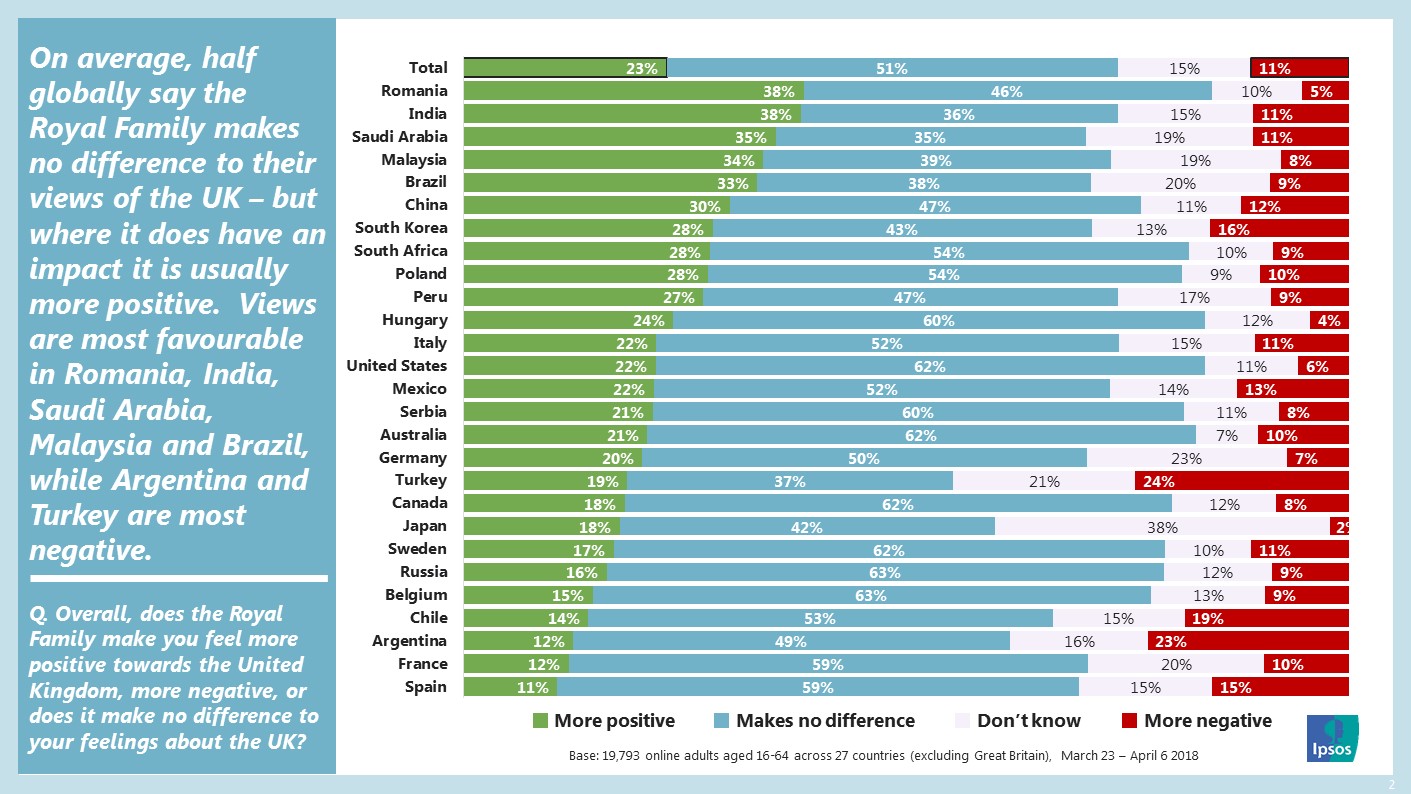 Having said that, the Royal Family does tend to reinforce perceptions of the UK as a traditional country.  When asked to pick from a list which attributes they associate with the UK because of the Royal Family, “traditional” is picked most, by 48% on average – only 9% choose “modern”.  This is followed by two more positive associations – “powerful”, picked by 22%, and “self-confident”, picked by 17%.  Fifteen per cent say the Royal Family makes them think the UK is “an unequal society” – higher in countries with a more negative attitude such as Argentina, Chile and Turkey. 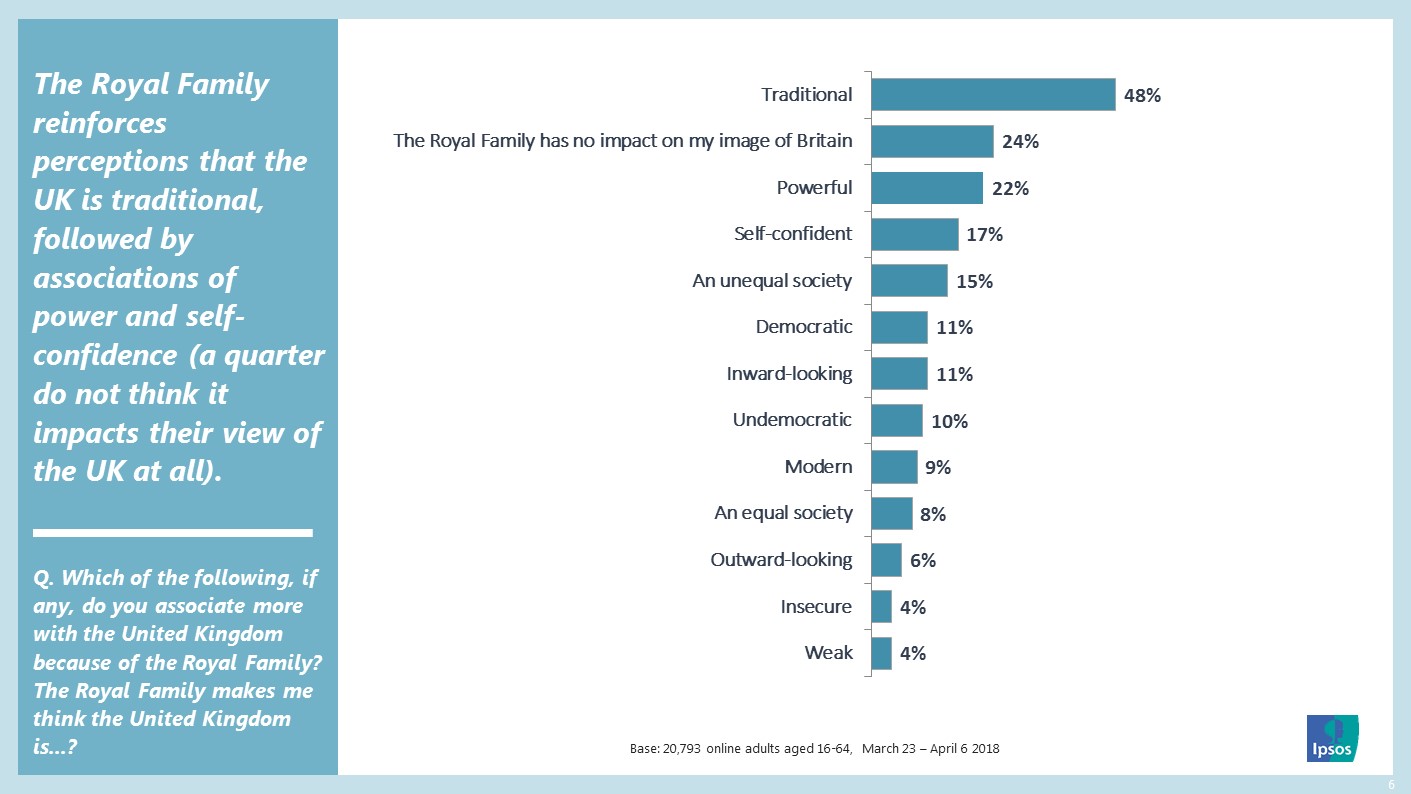 When it comes to their own constitutions, and attitudes to a monarchy more generally, there is little appetite around the world for changing the status quo.  Around half in Canada and Australia, where the Queen is currently head of state, think that abolishing the monarchy would make no difference to their country’s future, and only 15% in each think it would make things better.  Relatively few in other countries with a monarchy also think that abolishing their monarchy would make things better – only 4% in Japan, 17% in Belgium, 18% in Malaysia, and 23% in Sweden.  Spain has the highest proportion in favour of a change, at 37%, but still shy of a majority. 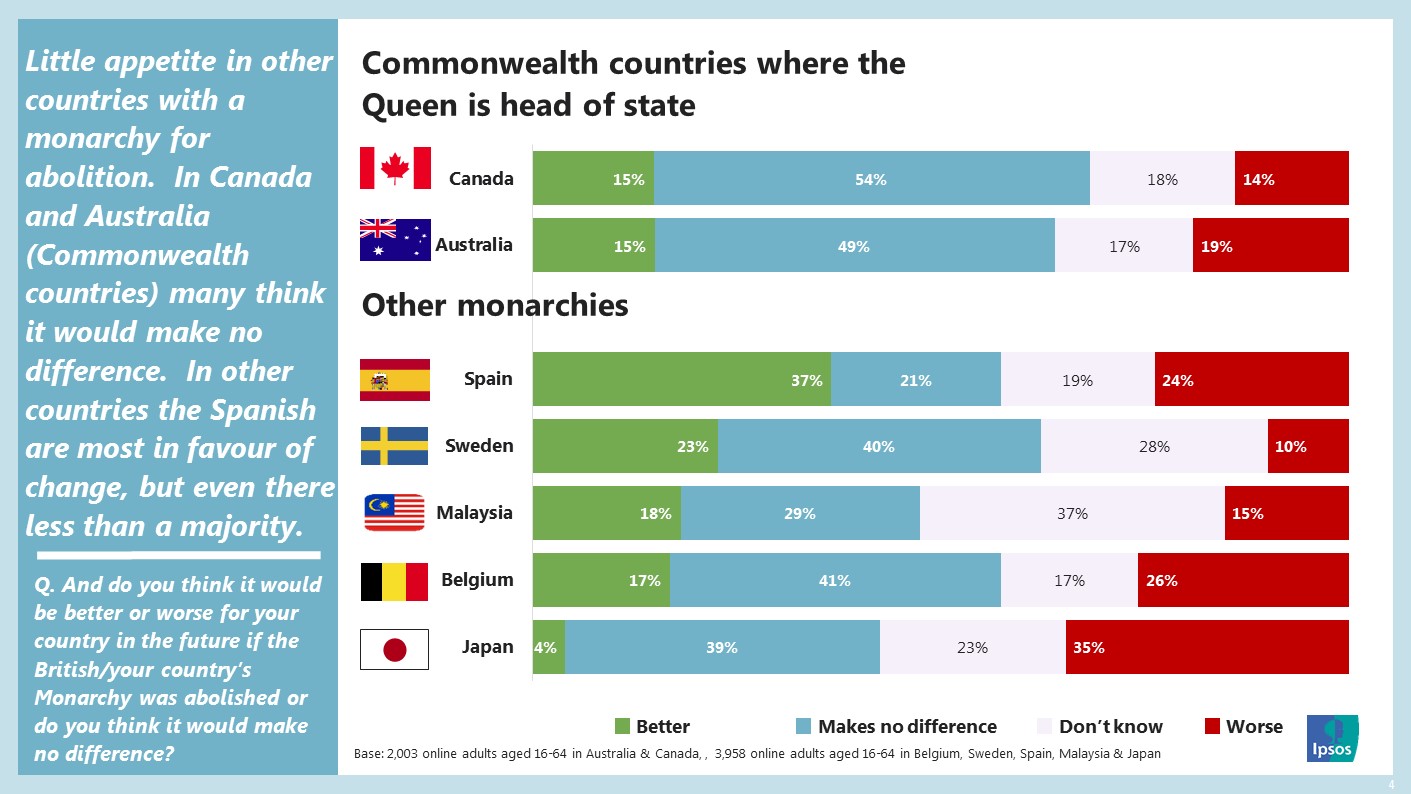 Similarly, among the 17 countries that are republics, on average only 16% think having a constitutional monarchy instead of an elected head of state would be better for their future – 36% think it would be worse, and around half that it would make no difference (28%) or don’t know (20%).  Opinions are more split in India, where 31% think replacing their elected head of state with a monarchy like Britain’s would be better, and 29% worse.

The Royal Family’s international reputation is bolstered by the popularity of both the Queen and members of the younger generation, which gives it a solid foundation for the future, and reflects the growing profile they have around the world – although Prince Charles’ ratings, currently at least, are not as high.  Newer members are also contributing – the Duchess of Cambridge is just as liked as her husband, and even though Meghan Markle’s profile is lower for the moment, that will change, and it is starting from a positive place.
The Royal Family also seems to have a beneficial impact on Britain’s reputation abroad overall (with some exceptions) – albeit for many it makes little difference, and few countries without a monarchy say they want one of their own.  Having said that, there might be a danger that it promotes a traditional rather than modern image of Britain, although it increases associations of Britain as powerful and self-confident too.