Ipsos’s final Scottish referendum poll shows the No campaign with a very narrow lead, in line with other polls in recent days. Among those certain to vote, 50% say they will vote No, with 45% saying they will vote Yes and 4% still undecided. Excluding those undecided, 53% of certain voters say they intend to vote No, with 47% to vote Yes.

Some 95% of Scots say they are certain to vote today, including 90% of those aged 16-24.Both sides, though, include supporters for whom this is their first time registered to vote: 13% of Yes supporters and 10% of No voters. 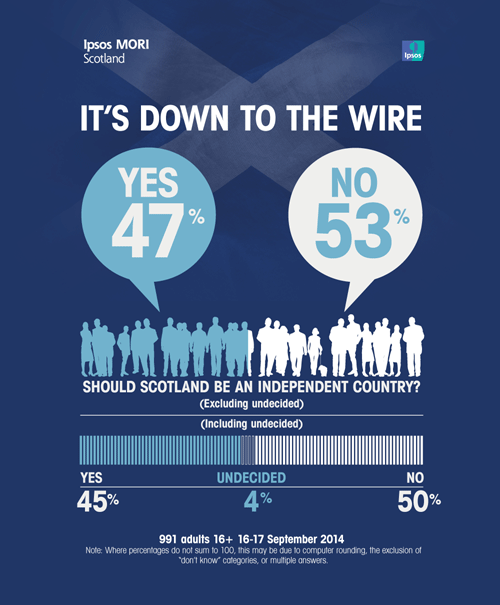 Claims of negativity regarding the No campaign are reflected in the reasons behind voters’ choices. Just under six in ten (58%) of No voters say fear for the future if the No side loses was more important in deciding their vote than hope if their side wins (at 36%). This compares with 80% of Yes voters who said they voted because they were hopeful for the future if their side wins; just 16% of Yes voters did so more out of fear than hope. Overall, 57% of Scots based their votes on hope more than fear, with 38% basing their vote on fear if they lose more than hope if they win.

‘These results confirm the picture from other polls before polling day – the referendum looks extremely close, and although No seems to have a small lead much will depend on turnout on the day. Meanwhile there is a clear difference in the motivations for voters on the two camps – Yes voters saying they are motivated more by hope for the future if their side wins, while No voters say fear for the future if the No side loses has been more important to their vote.’