As we move from September’s independence referendum to the prospects for next year’s General Election, our new poll for STV News shows the SNP in a commanding position.

Among those who told us that they would be ‘certain’ to vote in an immediate General Election, 52% say they would vote SNP, a 29-point lead over Scottish Labour on 23%. Support for the Scottish Conservatives stands at 10%, with the Scottish Liberal Democrats and the Scottish Green Party both on 6%. 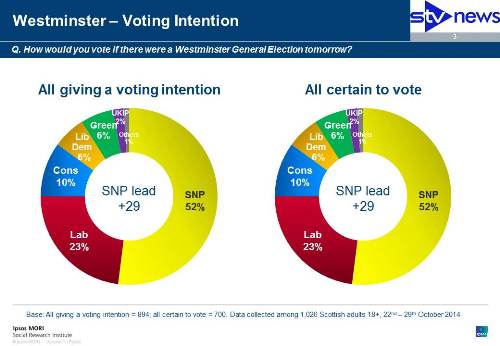 "The poll gives a further boost to the SNP ahead of their upcoming conference and the formal announcement of Nicola Sturgeon becoming the new first Minister. At the same time it will be particularly unwelcome news for the Labour party after a bruising period since the referendum, culminating in Johann Lamont’s resignation last week. They will hope that this represents a trough in public support and that their upcoming leadership contest will allow them to begin to regain some of the support they have lost."